Map of algal bloom chosen for 2014 ‘best of’ Esri book 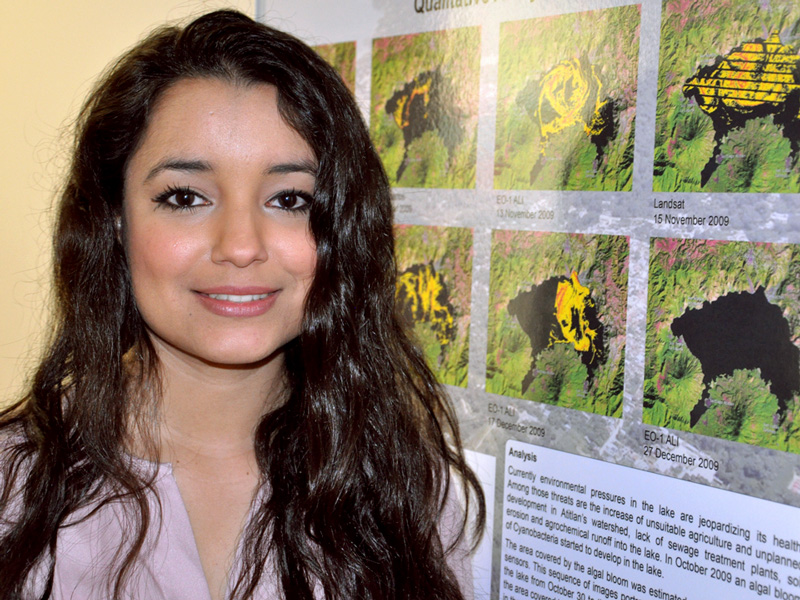 Africa Flores developed an algorithm that measures and tracks changes in aquatic chlorophyll as a proxy for water quality in Lake Atitlan in Guatemala.
UAH

HUNTSVILLE, Ala. (Dec. 12, 2013) - A series of satellite images composited by a UAH graduate student so they track the growth and disappearance of an algal bloom in a Guatemalan lake was chosen for publication by the company that created the software she used for the project.

Africa Flores, who will soon graduate with a masters of science degree in Earth system science, developed an algorithm that uses hyperspectral data from NASA's EO-1 satellite to measure and track changes in aquatic chlorophyll as a proxy for water quality in Lake Atitlan in Guatemala. This method can be transferred to study other lakes and large rivers in the region, where water quality information is otherwise scarce.

Using data from EO-1 and other satellite instruments, she created a series of satellite images mapping an algal bloom in Lake Atitlan from October through December 2009. Displayed in a poster session at the 2013 Esri software users conference, those images will be published in the 2014 Esri Map Book, which will be distributed to the approximately 15,000 people who attend Esri's 2014 users conference.

This work began when Flores was working at the Water Center for the Humid Tropics of Latin America and the Caribbean (CATHALAC).

Flores also had images from her work published in the 2013 Esri Map Book. She is also presenting her research - which is supported by NASA's SERVIR program - this week at the American Geophysical Union's fall conference.

Partially surrounded by three volcanoes, Lake Atitlan is a major recreational area in Guatemala, famous for its clear, pristine water. While raw sewage dumped into the lake from surrounding towns and farm chemical runoff that flows into the lake are causing water quality to degrade, little scientific data about water quality in the lake has been collected. That was, in part, due to the cost of collecting and analyzing water samples from the lake using traditional methods.

'At some point the lake was going to show negative effects," Flores said. "At its peak on Nov. 20, 2009, about 40 percent of the lake was covered in algae. This not only had a bad economic effect on local tourism, but this algae bloom was caused by (pollution induced) cyanobacteria, which can be toxic.'

Flores hopes her work will create low-cost tools that local government health and environmental agencies might use to monitor water quality in regions where there is no infrastructure to support water sampling and testing.