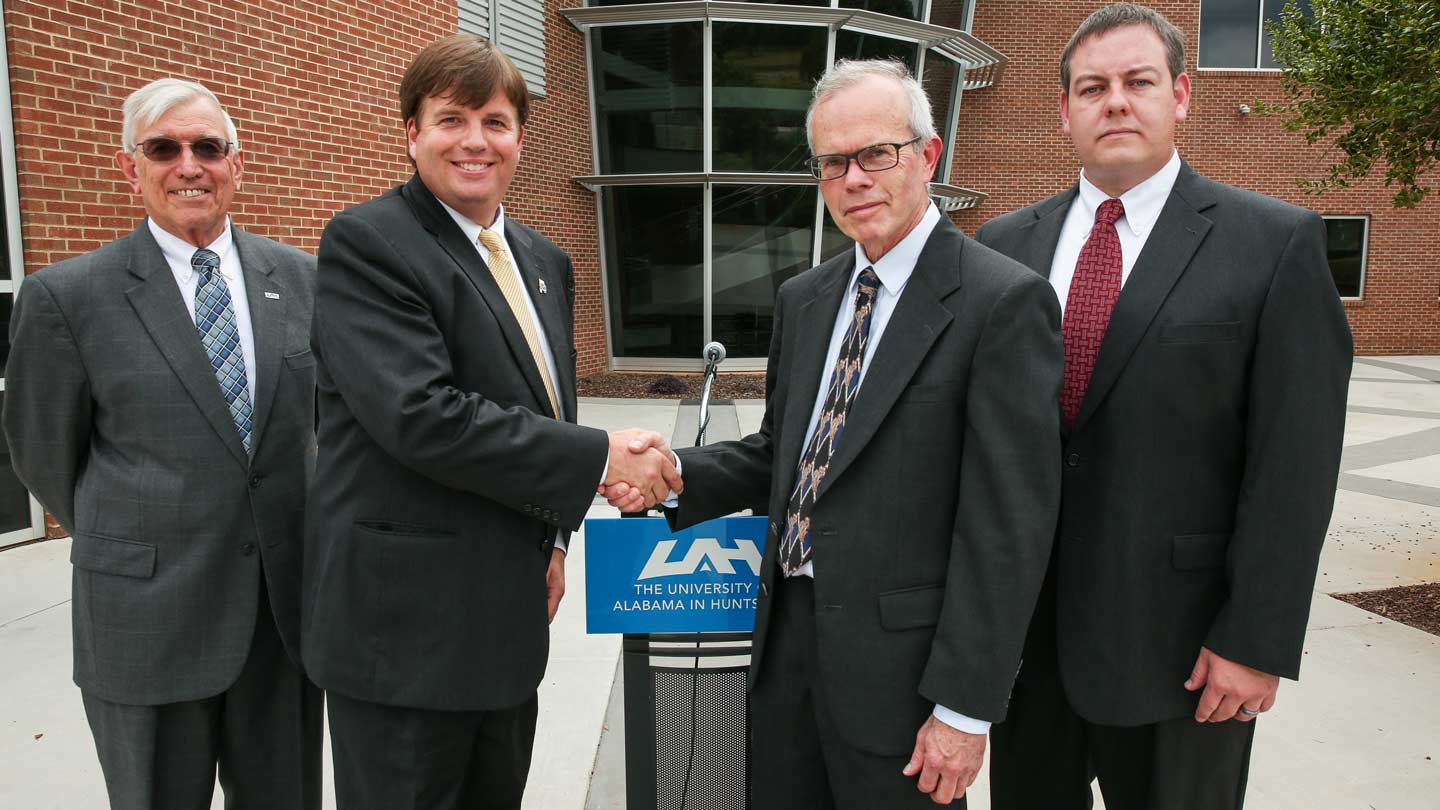 A new tornado early warning system could result from research at The University of Alabama in Huntsville (UAH) that's being conducted with the help of General Atomics Electromagnetic Systems (GA-EMS) and supported by $50,000 in seed funding from the Madison County Commission through Chairman Dale Strong.

"I am excited to team with UAH and GA-EMS for important research on the infrasound detection of tornadoes," Strong says. "Any early prediction or warning to residents is critical in saving lives and property. It's not about if we're going to have another natural disaster - it's when."

The seed funding announcement came on the five-year anniversary of the devastating April 27, 2011, Super Outbreak, a multiple-tornado event that left behind catastrophic damage in Madison County and the Southeast. It was the largest, costliest and one of the most deadly outbreaks ever recorded.

Any early prediction or warning to residents is critical in saving lives and property. It's not about if we're going to have another natural disaster – it's when.

The seed funding will be used to develop the necessary infrastructure and start the research on the relationships between infrasound and tornadoes and other severe storms, says UAH atmospheric scientist Dr. Kevin Knupp.

"This will help secure future funding in this area," Dr. Knupp says. "For example, a proposal is currently being written to acquire funds through the VORTEX-SE program, supported by NOAA. If funded, this initial research will begin as soon as fall 2016 and extend into spring 2017."

Infrasound is generally defined as sound waves with a frequency less than 20 Hz - the lowest range of human hearing. Unlike higher frequency sound in the audible range (20-20,000 Hz), infrasound with a frequency around 1 Hz can travel hundreds of miles under typical atmospheric conditions without significant atmospheric attenuation.

"I have had a long-standing interest in infrasound, and that interest was heightened after I was contacted by Hank Rinehart of GA-EMS, who leads an infrasound group at the company," Dr. Knupp says. "They had some infrasound detectors operational during the April 27, 2011 super tornado outbreak, which accurately detected and tracked the Hackleburg (EF-5) and Cullman (EF-4) tornadoes.

Rinehart, who is GA-EMS' business area director of Sensors and Surveillance Systems, says an internally funded analysis of GA-EMS infrasound sensors that were operational on April 27, 2011 demonstrated further evidence of persistent and high-coherence infrasound emissions during the lifecycle of multiple tornadoes. The analysis was presented by the company at the 164th meeting of the Acoustical Society of America in Kansas City, Mo.

"The GA-EMS Sensors group has a rich history of innovation in acoustic technologies. As part of our continued research and development efforts, GA-EMS has developed and matured acoustic and infrasound sensors, systems and associated algorithms for the principal purpose of providing awareness, detection/warning and tracking of acoustic and infrasonic sources of interest to our customers across industry, academia and numerous government agencies," Rinehart says.

"In a collaborative role with UAH and the Madison County Commission, GA-EMS serves as the infrasound sensor provider and signal analysis lead for capturing and processing infrasonic emissions from tornadic severe weather systems," Rinehart says. "Our desire is to promote further understanding of the underlying mechanisms of infrasound generation by severe weather phenomenon.

"The end result is the integration of scientific research with advanced sensor systems to enhance the warning process and reduce false alarms by providing additional, independent data to support the confirmation of the presence of tornadoes," Rinehart says.

"We plan to collaborate with GA-EMS on future projects, and are currently developing a collaborative proposal to conduct basic and applied research in this area. We hope to determine the infrasound detection efficiency of all tornadoes from weak - EF0 - to strong - EF5," Dr. Knupp says. "This includes the maximum range of detection of tornadoes, and how that depends on tornado intensity and size."

Also under study will be whether infrasound is generated prior to the development of a tornado on the ground.

Besides visual detection that is of limited use at night, the only source of "direct" detection of tornadoes is a dual polarization radar signature that tends to be more reliable at relatively close range.

"Infrasound detection offers a capability to economically fill in gaps in radar coverage," Dr. Knupp says. "If the public understands that direct detection has a very high level of accuracy, then we believe that complacency can be reduced through public education."

A relationship between infrasound and tornadoes was suggested in the 1960s and 1970s, and further established by National Oceanic and Atmospheric Administration (NOAA) scientists who conducted research that has correlated infrasound sources with verified tornadoes. However, the manner in which infrasound is generated by tornadoes is not completely understood.

Also of interest is infrasound's potential use to better predict approaching severe weather.

"Some previous research suggests that infrasound may be useful," says Dr. Knupp. "This will be an important future research topic for this project."