Landslide sensors at UAH may save lives worldwide 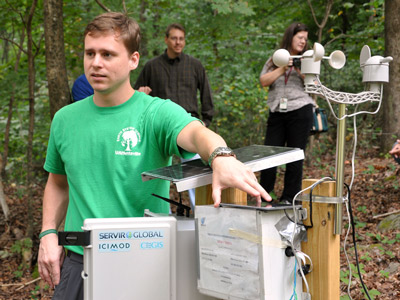 Eric Anderson explains the operation of the sensor.
UAH

HUNTSVILLE, Ala. (Oct. 24, 2013) - Using technology found in cell phones, inexpensive sensors being tested at Monte Sano State Park might one day soon save lives by giving advance warning of deadly landslides in at-risk areas around the world.

The wireless test sensors are installed around an active landslide zone in the park. A team from the Atmospheric Science Department at The University of Alabama in Huntsville is studying the sensors ­to see whether they can provide useful information about soil stability and the likelihood of an impending landslide.

Recent research estimated that more than 4,500 people are killed and thousands of others are injured in landslides around the world every year.

What makes UAH's low cost sensors unique is, first, that they are low cost. In addition to weather instruments, they also use off-the-shelf technology that was developed for other uses, such as motion detectors that also are used in cell phones (for game controllers or to tell the phone how it is oriented) and in robotics. The sensor that tells when the soil is so saturated by rain that it might become unstable was developed for irrigation systems, to tell when a field has received enough water.

The bigger savings, however, are in the cell phone technology itself. Previous sensor packages that provided real-time environmental data generally required either a hard wire connection or expensive uplink hardware. Research instruments that weren't connected by wire had to be routinely serviced, both to collect the data and to change batteries.

The UAH sensors connect to the Internet using inexpensive cell phone connections, so scientists at the university can monitor their instruments without needing to either run wires into remote areas or have someone visit the sensor boxes on a regular basis. 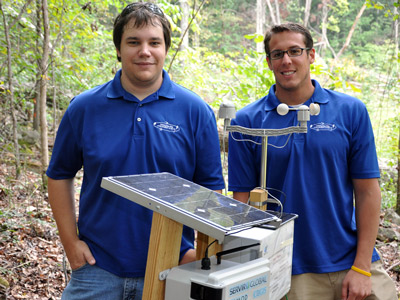 Eric Anderson, a research associate in UAH's Earth System Science Center, learned about the wireless sensors - which were conceived developed by a University Space Research Association (USRA) scientist in Huntsville's National Space Science and Technology Center - while he was a research scientist in Panama.

During the three years he was there, Anderson saw the destruction caused by landslides throughout Central America.

"It is a problem almost every year in areas with steep slopes and heavy rainfall," he said. "El Salvador, Honduras, Nicaragua and throughout the region, in many places it is a disaster waiting to happen. The soil types found in that region also are more prone to landslides, especially the volcanic and clay soils.

"Unfortunately, the volcanic soils also are some of the richer soils, better for farming, so landslide-prone areas with volcanic soils tend to be more densely populated."

After enrolling in the Earth system science program at UAH, Anderson also went to work with NASA, giving him access to Karthik Srinivasan, the USRA scientist who invented developed the wireless sensors for NASA's SERVIR program. The sensors were created as a low-cost tool for calibrating an airborne instrument that measures soil moisture. Because they were self-contained, those first sensors could be moved from spot to spot as needed to gather data on the ground at the same time the airborne instrument was overhead.

After seeing the sensors in action, Anderson recognized the potential value something similar might have in studying and monitoring landslides. He took his idea to Dr. Udaysankar Nair, an associate professor of atmospheric science.

"That's one of the things that makes this project so unique, is that it was initiated by a graduate student," said Nair, who with two graduate students is Anderson's collaborator in the sensor project. Nair and Anderson wrote a proposal that led to a $56,000 grant from UAH's University Research Infrastructure Initiative. UAH graduate students Aaron Kaulfus and Brian Freitag field tested the sensor network and are testing computer models that could be linked to the network to provide the capability to predict landslides.

While that might have been enough money to buy one or two traditional sensor kits, they bought enough parts to build about a dozen of the cell phone-based instrument packages. The power supply is camping lantern batteries recharged by solar cells. Because the instruments are small and energy efficient, the solar arrays needed to keep the batteries charged are small.

Because cell phone service is now available in many undeveloped areas where regular hard-wire telephone lines were too expensive to install (and satellite phone service is available almost everywhere), these sensors could have use far beyond monitoring landslides. The NASA/USRA team has installed a set of similar sensors in Bangladesh to provide flood monitoring and warnings.

Nair is interested in the potential value these sensors might have in two of his ongoing research programs: forecasting the spread of smoke from planned forest fires and studying weather patterns around Mount Kilimanjaro in Africa. In both cases, being able to set out a network of low-cost sensors without hard wire connections could be useful.

"You can create a network and monitor the whole thing," he said. "You can also have a small microprocessor on site to run models and analyze the data as it's coming in. That gives you the ability to do things like provide real-time warnings without needing a person in the loop 24-7. If you have the network there, it can collect the information and do all the processing. It does all it needs to do right there."