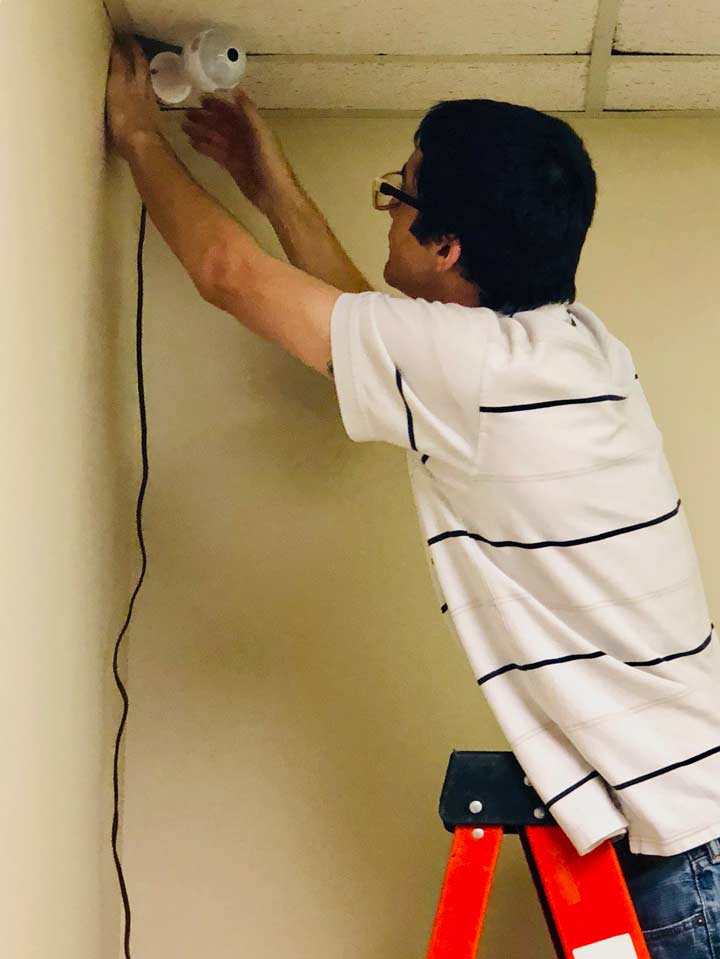 Safety and security technology tests underway at a Jackson County school in collaboration with The University of Alabama in Huntsville (UAH) Systems Management and Production (SMAP) Center could help keep Alabama’s schoolchildren safer if implemented statewide.

The technology test bed at Skyline High School is a cooperative effort between the Jackson County Board of Education, Jackson County Sheriff’s Dept. and UAH.

"On the State of Alabama level, we are working with the Alabama Law Enforcement Agency (ALEA)," says Dr. Gary Maddux, SMAP director. "We will also be working with the local municipal police officers of the various towns within Jackson County."

The effort is an evolution of SMAP involvement in Jackson County schools security that began following the 2012 Sandy Hook Elementary School shootings in Connecticut and was spurred again by the Parkland, Fla., school shootings.

"After Parkland in February, we wanted to revisit our efforts. However, we changed our approach from one of planning to one of preventing," says Dr. Maddux, who is a Skyline alumnus.

Rather than developing an emergency response to an active shooter incident, the project focuses on expanding the perimeter of protection to help ensure interception of a potential shooter, he says. Components of the system also provide law enforcement with enhanced situational information.

Cameras linked directly to the cell phones of Jackson County sheriff’s deputies will provide valuable advance information in an emergency scenario, says Sheriff Chuck Phillips. "We can go on our cell phones and turn them on and off as we please and look and see what going on, and it also has audio so we can hear what’s going on," Sheriff Phillips says.

"If you have an active shooter, somebody might be able to see him on the camera and go to where he’s at," he says. "Or, if you’ve got children in a room and you don’t know exactly where they’re at, you can locate them by camera, and that’ll be valuable information to someone who is working a case like that."

At the state level, Dr. Maddux says there is widespread interest in the UAH work. "For one, we are completely independent," he says. "We are not selling anything, including our services."

The work is being performed at no cost to the Jackson County School System and SMAP has not sought or received external funding, Dr. Maddux says.

The Skyline testing program implements technologies that were determined to be effective, affordable and transferrable to other schools, he says.

"Skyline School was selected because their geographic location was advantageous, and Principal Jason Davidson is a progressive leader who embraced the challenge," Dr. Maddux says. "With the cooperation of Jackson County Superintendent Kevin Dukes and local law enforcement, we began studying technologies and implementing components over the summer."

Dr. Maddux and Dukes are briefing the Governor’s Council on School Safety on the test program results, as well.

"Dr. Maddux addressed the Governor's Council on School Safety in August with great results," Dukes says. "Our system is at the forefront of school security measures, and we are thrilled."

Included in the program is a Jackson County School System teacher and staff email hotline so that educators and staff can report vulnerability issues or offer ideas for improving school security.

"Although this service was only implemented in September, we are already receiving emails," says Dr. Maddux. "We respond, investigate and determine implementable solutions in partnership with the school’s administration and the superintendent."

Safety components being tested include:

"As these technologies are tested and proven, the superintendent will make the determination as to which will be implemented countywide," Dr. Maddux says. "Our hopes are to determine strategies that can be implemented in any school system – with no regard to boundaries – to protect all children."

Dr. Maddux says it is important to note that none of the safety measures being tested includes guns within a classroom.

"We are not advocates of this approach, and fear that arming teachers would be detrimental to school safety," he says.

"Through the use of exterior cameras and other smart technologies, we should be able to identify a threat the moment they arrive on campus," Dr. Maddux says. "Upon identification, messages can be sent immediately to the school administration and local law enforcement before that person has the chance to enter the building."

Metal detection wands provide the principal with an opportunity to intercept the detected person outside the building and determine the threat.

"The technologies and tools that have been provided not only address safety from a strategic aspect, but from a financial and cost-effective aspect, as well," says Principal Davidson. "The new technologies that have been provided by UAH have allowed Skyline School to have an eye in the classroom for safety purposes. This will allow us to be able to react to an emergency situation in a more timely manner."

"In many cases, we are the first group of users to try some of these actions, and thus are in part helping prove out or enhance the capabilities of the GeoHub," Dr. Maddux says.

Applying UAH’s resources to the need for school safety is a natural fit, Dr. Maddux says.

"Universities are a storehouse of knowledge and young, energetic talent," he says. "Harnessing that talent to address issues such as school safety is an extremely valuable asset, and one that other schools could easily adopt."

The work is both rewarding and challenging, he says.

"The rewards include seeing tangible progress through immediate implementation within a school," Dr. Maddux says. "Those participating also recognize the stakes – you cannot afford to get it wrong."