How do we clean up the junkyard orbiting Earth? 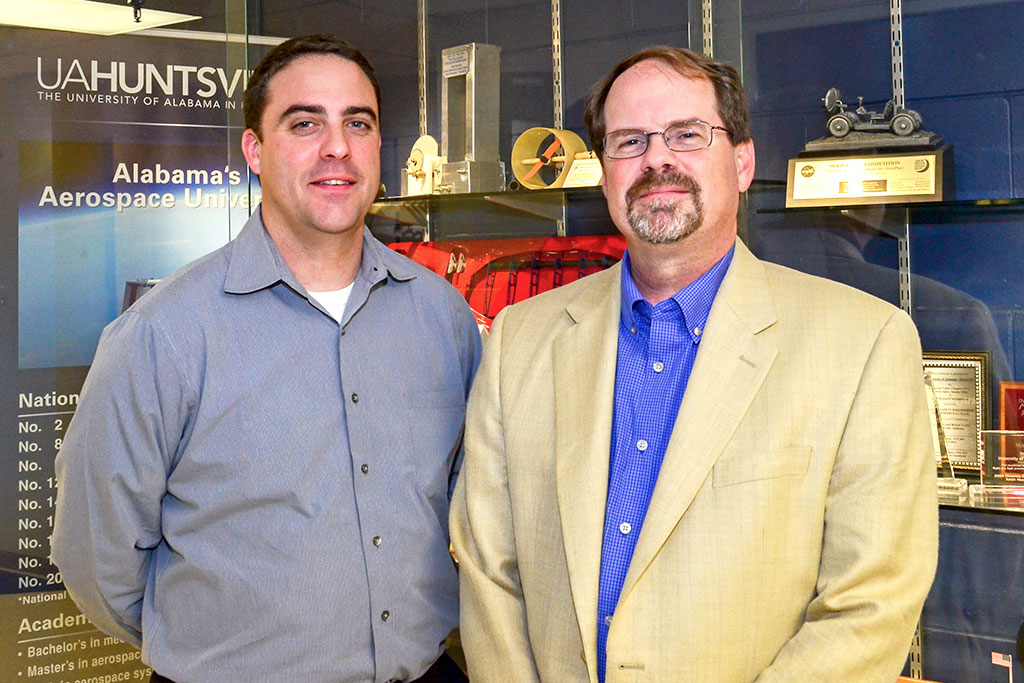 HUNTSVILLE, Ala. (April 29, 2014) – The biggest-sized junkyard in the world orbits it, and a University of Alabama in Huntsville (UAH) aerospace systems engineering graduate student says it's time to get active about reducing the debris field before we reach a tipping point beyond which we may not be able to do much.

"I saw a need in the space community, with my systems engineering background, to walk people through the thought processes of how you apply a systems engineering approach to policy questions," Percy says. "How do we bring the discussion to a subset of solutions we can ultimately implement?"

How do we bring the discussion to a subset of solutions we can ultimately implement?

In early April, according to news reports, the International Space Station (ISS) had to change position to avoid a space debris field of parts from an old Ariane 5 rocket launched by the European Space Agency that came within 1,000 feet of the station. It was the second time in three weeks ISS had to sidestep space junk.

Everything that gets shot into low Earth orbits eventually becomes junk – even, one day, ISS itself. It's just a matter of time.

Time is also a factor that can work against proper disposal of satellites nearing the end of their lives. Satellites now in orbit have been designed to carry a bit more fuel in their tanks for use when they get old, to propel them into an orbit where they will re-enter the atmosphere and burn up within 25 years or so.

But because the current standards for being a good space neighbor by taking out your garbage are guidelines rather than mandates, there's nothing in place now to prevent the owner of a communications satellite from using that last bit of fuel to reboost its orbit and add more years to its longevity.

That's one way Percy says we get large space debris from dead satellites, along with spent rocket stages and panels and other big parts that come off in flight, or when space junk collides with other space junk or orbiting working satellites. In 2009, the Iridium 33 and Cosmos 2251 satellites hit in the first accidental hypervelocity collision between two intact artificial satellites in Earth orbit. Iridium was an operational communications satellite. Cosmos was Russian space junk and no longer actively controlled.

From the perspective of populated areas on Earth, big space junk is a worry.

"What we're really concerned about is the big stuff that comes in uncontrolled and breaks up in the atmosphere into big chunks," Percy says. Larger objects are more likely to have parts survive re-entry, posing a potential risk to people on the ground. Think Skylab, big parts of which were strewn across Australia, if it had landed in New York.

But the biggest worry for satellites operating in orbit comes from the smaller debris, the stuff that's 1 centimeter to 10 cm in size – from marble to softball sized.

The big stuff we have a pretty good handle on, as far as where it is, he says. In the U.S., the Dept. of Defense tracks it. If we know where it is, we can move to avoid running into it, Percy says. Because we can't see the smaller stuff, NASA predicts where it is but avoiding it is nearly impossible right now. Of course, tracking and removal are two very different things.

In 1978, NASA scientist Donald J. Kessler proposed a scenario now known as the Kessler Syndrome or Kessler Effect, where the density of space junk reached a point that collisions between objects would cause a cascade that would generate further debris to promote added collisions, potentially rendering space exploration unfeasible for generations.

In his paper, Percy outlines policy initiatives and engineering solutions that could prevent that tipping point from being reached. The keystone issue is how to achieve a balance between commercial economic interests, practicality, regulation and global governmental cooperation, he says.

"What we're concentrating on now is the methods we can use to reduce space debris easier," Percy says. "The work I'm doing for my PhD is how to deal with the problem through design modifications or additions before a space vehicle is launched."

Working to equip future craft for their eventual removal could have a large impact, he says, because the size of the space community is growing quickly, from 16 nations two decades ago to 46 now. Getting relatively new and emerging spacefaring countries like Saudi Arabia and India onboard with debris control that starts at the design and launch phases will do much to reduce the future problem, according to Percy.

Engineering solutions for future spacecraft depend on type and size, as well as orbit. A deployable sail attached to a satellite could gradually slow it in low Earth orbit so it eventually burns up in the atmosphere. Or a small and light dedicated ion propulsion pack can nudge a craft into contact with the atmosphere.

"Implementing these engineering solutions on satellites before launch is becoming more critical in the burgeoning age of cube satellites, when scores of satellites can be launched from a single rocket," says Dr. Landrum.

It's the point where the technology interfaces with governments and policies that still has to be mapped out.

"The way the regulations are now, they are more like guidelines," Percy says. So should the U.S. work with entities like the United Nations, which has a committee working on space use, or unilaterally go ahead with its own efforts?

"One possibility is that, yeah, we just go ahead and do it and show that it can be done," says Percy. But then there's the question of who pays. In space, once a craft is launched it is the country that launched it that carries the responsibility for it and not any commercial entity that may have launched it. China and Russia are the biggest owners of space junk. Should the U.S. only concern itself with its own debris?

Despite these difficult questions yet to be answered, all of which are included in his paper, Percy says he's optimistic that a set of solutions will be in place one day.

"There are pockets of groups all over the world that are looking at active debris removal," he says. "I don't think we're ready yet to say here's the way to do it. I'm optimistic that we can do something about it because there are enough people who know about the problem and want to fix it. The more conversations we have about the problem of space debris, the better traction the issue will have."