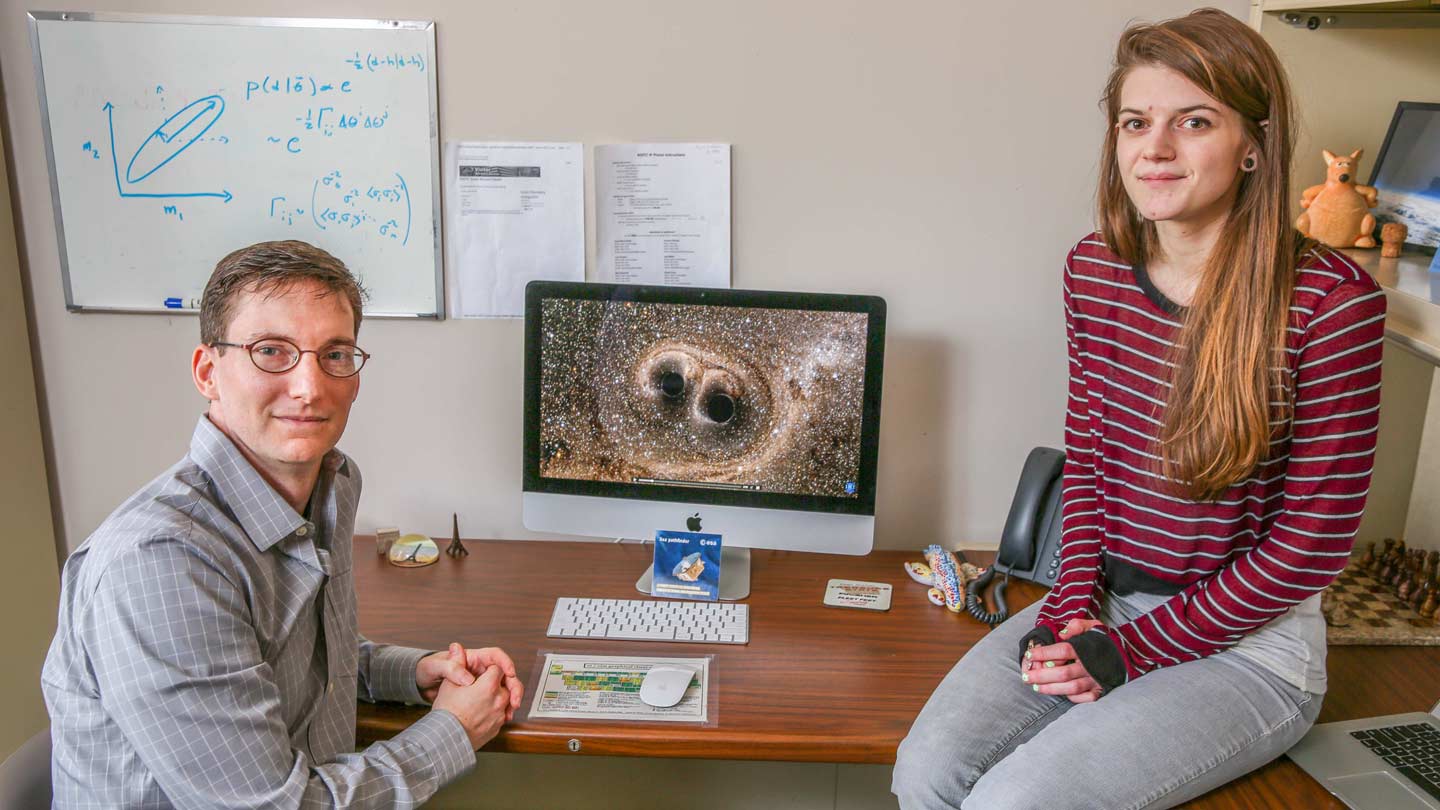 UAH Scientist Finds Himself at the Center of the Action

For the first time, scientists have observed ripples in the fabric of spacetime called gravitational waves, arriving at the Earth from a cataclysmic event in the distant universe. This confirms a major prediction of Albert Einstein's 1915 general theory of relativity and opens an unprecedented new window onto the cosmos.

Gravitational waves carry information about their dramatic origins and about the nature of gravity that cannot otherwise be obtained. Physicists have concluded that the detected gravitational waves were produced during the final fraction of a second of the merger of two black holes to produce a single, more massive spinning black hole. This collision of two black holes had been predicted but never observed.

The gravitational waves were detected on Sept. 14, 2015, at 5:51 a.m. Eastern Daylight Time (9:51 UTC) by both of the twin Laser Interferometer Gravitational-wave Observatory (LIGO) detectors, located in Livingston, La., and Hanford, Wash., USA. The LIGO Observatories are funded by the National Science Foundation (NSF), and were conceived, built, and are operated by the California Institute of Technology (Caltech) and the Massachusetts Institute of Technology (MIT). The discovery, accepted for publication in the journal Physical Review Letters, was made by the LIGO Scientific Collaboration (which includes the GEO Collaboration and the Australian Consortium for Interferometric Gravitational Astronomy) and the Virgo Collaboration using data from the two LIGO detectors.

The significance of this discovery cannot be overstated. Gravitational waves are the last missing confirmation of Einstein’s general theory of relativity – our most fundamental understanding of how physics works in the macroscopic world.

Research scientist Dr. Tyson Littenberg at The University of Alabama in Huntsville (UAH) Center for Space Plasma and Aeronomic Research (CSPAR) helped the LIGO team develop sophisticated computer algorithms that comb through data and extract physical information from a detection. Dr. Littenberg has been involved in LIGO-related research since 2007 and applied on behalf of UAH for the university to become a member of the LIGO Scientific Collaboration. UAH was accepted in 2015.

Once it appeared that waves were detected, Dr. Littenberg found himself at the center of the action.

"I knew within a few hours of the detection on Sept. 14 that we had something big. Really big," he said. "Two of the data analysis efforts that I work on were right at the center of the action. Our job is to take a small segment of data that has been identified as being potentially interesting, and do an exhaustive analysis to figure out what the gravitational wave signal looked like in our detectors. It took months of analysis, re-analysis, checking, rechecking, and re-rechecking of the results before we were ready to say with confidence that we had something, and precisely what we had. The stakes are so high, we tried over and over again to prove ourselves wrong until, exhausted, we admitted defeat and said, 'This is really it.'"

The LIGO discovery has broad connections in the fields of fundamental physics, astrophysics and astronomy.

"The significance of this discovery cannot be overstated. Gravitational waves are the last missing confirmation of Einstein's general theory of relativity - our most fundamental understanding of how physics works in the macroscopic world," Dr. Littenberg said. "LIGO has been working towards this moment for decades. Hundreds of scientists from the world over have dedicated their professional lives to getting this first detection. Hundreds more are hinging their careers on the gamble that gravitational wave detection would pay off.

"The gravitational wave research community has been holding its collective breath for decades waiting for the detections to start rolling in, so we could really get to work," he said. "The scientific world changed forever on Sept. 14."

Gravitational waves come to us from a regime of gravity that we have never been able to test before, Dr. Littenberg said. "This is a place where gravity is extremely strong - near a black hole - and changing extremely rapidly. The two black holes move at almost the speed of light before they collide."

One of the team's early questions was whether the observation was consistent with general relativity.

"So far the answer is yes, but as we get more and more detections, we will be looking very carefully to see if our theoretical understanding at any point doesn't match the data," said Dr. Littenberg.

"Almost everything we know about the universe has come to us from light. Now that we are receiving signals from the gravitational universe, we can learn about what is going on out there with a brand new 'sense,'" he said. "Thanks to this discovery we have finally turned on the 'sound track' of the universe. With it we have impressive detail about the collision of two black holes a billion light years away and we would never have known about it from telescopes - even inconceivably futuristic ones. The thrill is that we know there will be more."

That's because LIGO's first observing run was really a warm-up exercise and was not conducted at full sensitivity.

"That means, as the detectors continue to improve, we will detect many more gravitational wave signals," said Dr. Littenberg. "We have a brand new tool for learning about the universe. That doesn't happen every day!"

LIGO collected data until Jan. 12 but scientists have only gotten through the data collected up to Oct. 20.

"While we are working our way through the remaining data, work has already begun at the observatories to further improve the performance," Dr. Littenberg said. "Late this year we will start observing again with better sensitivity, and that means even more detections."

Meanwhile, the Virgo observatory in Italy is readying a detector for the next observing campaign, as well. 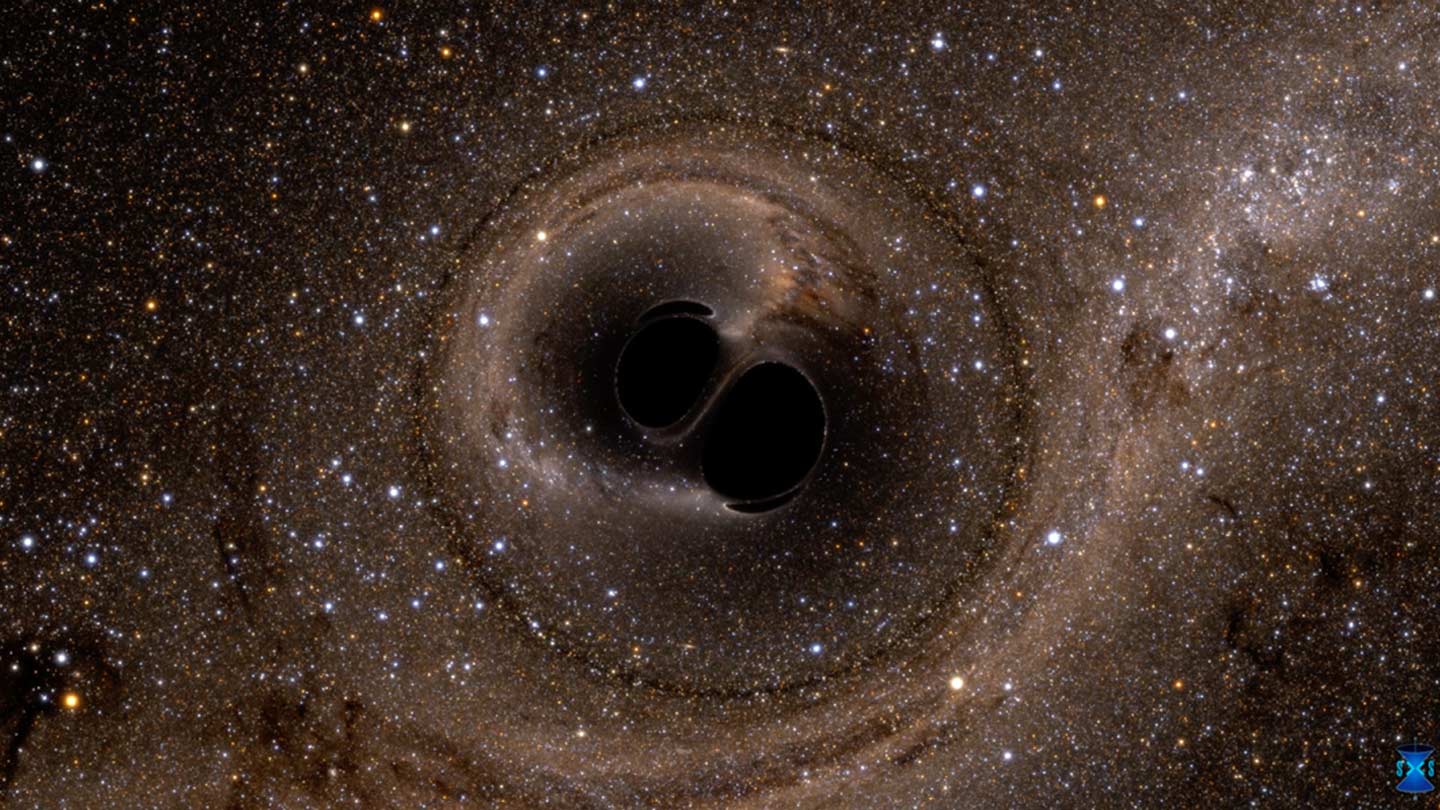 "The more detectors we have running, the more precisely we can measure characteristics of the source," he said. "Long term, another detector is under construction in Japan and a fifth detector is being planned for construction in India. Looking further down the road, space-based detectors have been studied for years to detect lower frequency gravitational waves, and there is an ongoing campaign monitoring pulsars to detect ultra-low frequency signals."

The confirmed discovery of gravitational waves should create even more excitement for the improvement of the ground-based detectors and advance prospects for space-based observations.

"LIGO's detection does not mark the end of a long journey; it is the first step," Dr. Littenberg said. "We have only gotten a few drops from the coming flood of discovery."

"Although it was only my first semester working with LIGO at the time of detection,' she said, "I am proud to be a part of such a bright and dedicated global team of scientists and I look forward to the next few exciting years to follow."

A discovery will open a new door to the universe, said Dr. Gary Zank, CSPAR director and chair of the UAH Department of Space Science.

"Waves carry information. We use all parts of the electromagnetic spectrum - optical, infrared, ultraviolet, energetic particles - to investigate the distant universe," Dr. Zank said. "Gravitational waves carry information from some of the most energetically violent events in the universe, meaning that we will have a new spectrum from which to learn new physics."

Verification of the existence of gravitational waves will mean researchers can begin to learn more about the physics of these waves, Dr. Zank said. "We will begin to explore all the fascinating complications and implications of gravity wave propagation in a way that wouldn't otherwise be possible."

Dr. Littenberg's involvement offers CSPAR and Department of Space Science (SPA) students "an unprecedented opportunity to be part of the excitement, and we fully expect that many graduate students will want to enter this field," Dr. Zank said. "Nowhere else in Alabama is this work being done."

Being part of the LIGO Scientific Collaboration places CSPAR and SPA at the forefront of modern general relativity, he said.

"This adds to an already world-class group of high-energy astrophysicists in CSPAR, some of whom are studying gamma ray bursts. Gamma ray bursts may very well come from the same sources that trigger gravitational waves, so we have considerable synergy in these fields at CSPAR and SPA and it is likely to make SPA a magnet for students wanting to study high-energy processes in astrophysics," Dr. Zank said. "This ties in closely to our NASA Marshall Space Flight Center partners, with whom we work closely on many of these problems."

LIGO research is carried out by the LIGO Scientific Collaboration (LSC), a group of more than 1000 scientists from universities around the United States and in 14 other countries. More than 90 universities and research institutes in the LSC develop detector technology and analyze data; approximately 250 students are strong contributing members of the collaboration. The LSC detector network includes the LIGO interferometers and the GEO600 detector. The GEO team includes scientists at the Max Planck Institute for Gravitational Physics (Albert Einstein Institute, AEI), Leibniz Universität Hannover, along with partners at the University of Glasgow, Cardiff University, the University of Birmingham, other universities in the United Kingdom, and the University of the Balearic Islands in Spain. 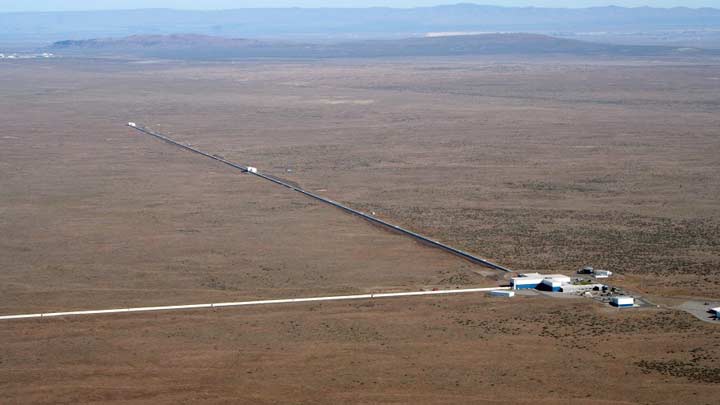 Virgo research is carried out by the Virgo Collaboration, consisting of more than 250 physicists and engineers belonging to 19 different European research groups: six from Centre National de la Recherche Scientifique (CNRS) in France; eight from the Istituto Nazionale di Fisica Nucleare (INFN) in Italy; two in The Netherlands with Nikhef; the Wigner RCP in Hungary; the POLGRAW group in Poland and the European Gravitational Observatory (EGO), the laboratory hosting the Virgo detector near Pisa in Italy.

The discovery was made possible by the enhanced capabilities of Advanced LIGO, a major upgrade that increases the sensitivity of the instruments compared to the first generation LIGO detectors, enabling a large increase in the volume of the universe probed - and the discovery of gravitational waves during its first observation run. The US National Science Foundation leads in financial support for Advanced LIGO. Funding organizations in Germany (Max Planck Society), the U.K. (Science and Technology Facilities Council, STFC) and Australia (Australian Research Council) also have made significant commitments to the project.