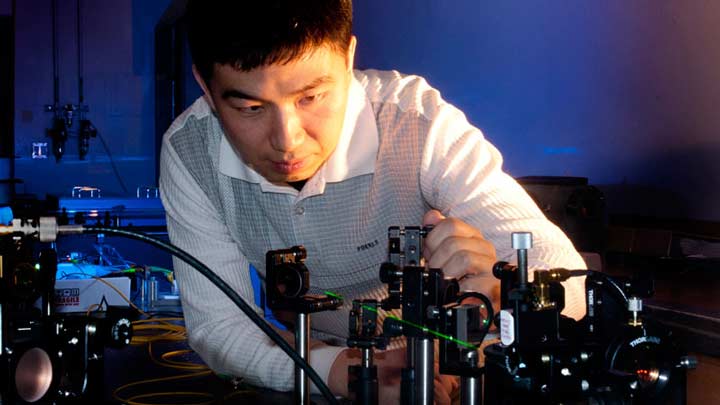 A five-year, $400,000 Faculty Early Career Development (CAREER) award by the National Science Foundation will help a University of Alabama in Huntsville researcher pursue the precise measurement and control of light in ultrafast lasers and other applications.

Dr. Lingze Duan’s research could have a transformational impact on optical communication, information processing, sensing and other ultrafast technologies.

"The overarching theme of my research at UAH is precise measurement and control of the fundamental properties of light, such as amplitude, frequency and phase," said Dr. Duan, an assistant professor in the Department of Physics. "Understanding how to manipulate light at high precision can help us develop better technologies in communication, navigation, sensing, imaging and fundamental science."

With the advent of ultrafast lasers, research into an absolute phase of light independent of another light wave is now possible. In contrast, the conventional optical phase, which is used to describe common optical effects such as interference and diffraction, is the relative phase between different light waves.

"A major part of my research is related to ultrafast lasers," Dr. Duan said. "Such lasers are capable of generating optical pulses as short as few femtoseconds (1 femtosecond is 10-15second or one millionth of a nanosecond). When properly stabilized, these pulses can be used as highly stable spectral references for high-precision spectroscopy or versatile clock carriers for remote timing synchronization."

With pulse widths approaching the optical cycle, it has become feasible to create a light wave that carries temporal markers sufficiently sharp to serve as the references of its own phase. This leads to a new concept, the Carrier-Envelope Phase (CEP), which can be regarded as an absolute phase of light.

The CEP is very difficult to measure. Dr. Duan’s research seeks to develop a deeper understanding of how the CEP interacts with semiconductor materials, especially semiconductor nanoparticles. Ultimately, the goal is to combine the latest advances in ultrafast optics, nanotechnology and spintronics to achieve direct electronic readout of the CEP with semiconductor nanoparticle detectors. Spintronics, or spin electronics, is the emerging field of study concerning the role played by electron spin in addition to electronic charge in solid state materials with the goal of creating devices that can harness both properties of the electron.

"Equipped with some of the most stable ultrafast lasers in the world, my research group has done extensive study on CEP-related topics over the last five years," Dr. Duan said. "This CAREER project builds upon our experience in ultrafast optics and aims to explore how these femtosecond pulses behave inside semiconductor nanoparticles."

If successful, the technology could open up an entirely new area of optics. Just as the amplitude and the frequency of a wave can be used to realize amplitude modulation (AM) and frequency modulation (FM), respectively, the absolute phase of light can also be exploited to carry information, which could lead to new schemes of optical communication and information processing. The CEP can also be used as extremely sensitive probes for high-precision optical sensing.

Moreover, accurate detection and control of the optics field in ultrafast pulses is an enabler for the emerging attosecond science, which seeks to explore the physical world at the time scale of 10-15–10-18 second. An attosecond is to a second what a second is to about 31.71 billion years – which is twice the age of the universe.

Ultrafast optics is something Dr. Duan has been working on for some time.

"I was introduced to the field of ultrafast lasers when I was a graduate student at the University of Maryland, College Park. My Ph.D. dissertation was on the development of high-speed pulsed lasers," he said. "But for me the real venture into the femtosecond world took place when I did my postdoctoral research at MIT.

"In fact, this CAREER award project was hatched from an unsuccessful project I was involved with at MIT," he said. "We did some preliminary study at that time and found that it was technically impossible. Eight years later, however, the advance in nanotechnology and other fields has shed new light on the old problem. I hope this time we can be much more successful."

Besides a potential transformational impact on communication, sensing and ultrafast technologies, the CAREER award will also help strengthen optics education at UAH and in the North Alabama region.

"As a part of our commitment to the National Science Foundation, beginning fall 2013, we will offer a guest optics lecture series in some of the general-topic introductory science courses and even at some local high schools," Dr. Duan said. "A student optics club focusing on regular extracurricular research and outreach activities will also be launched soon."