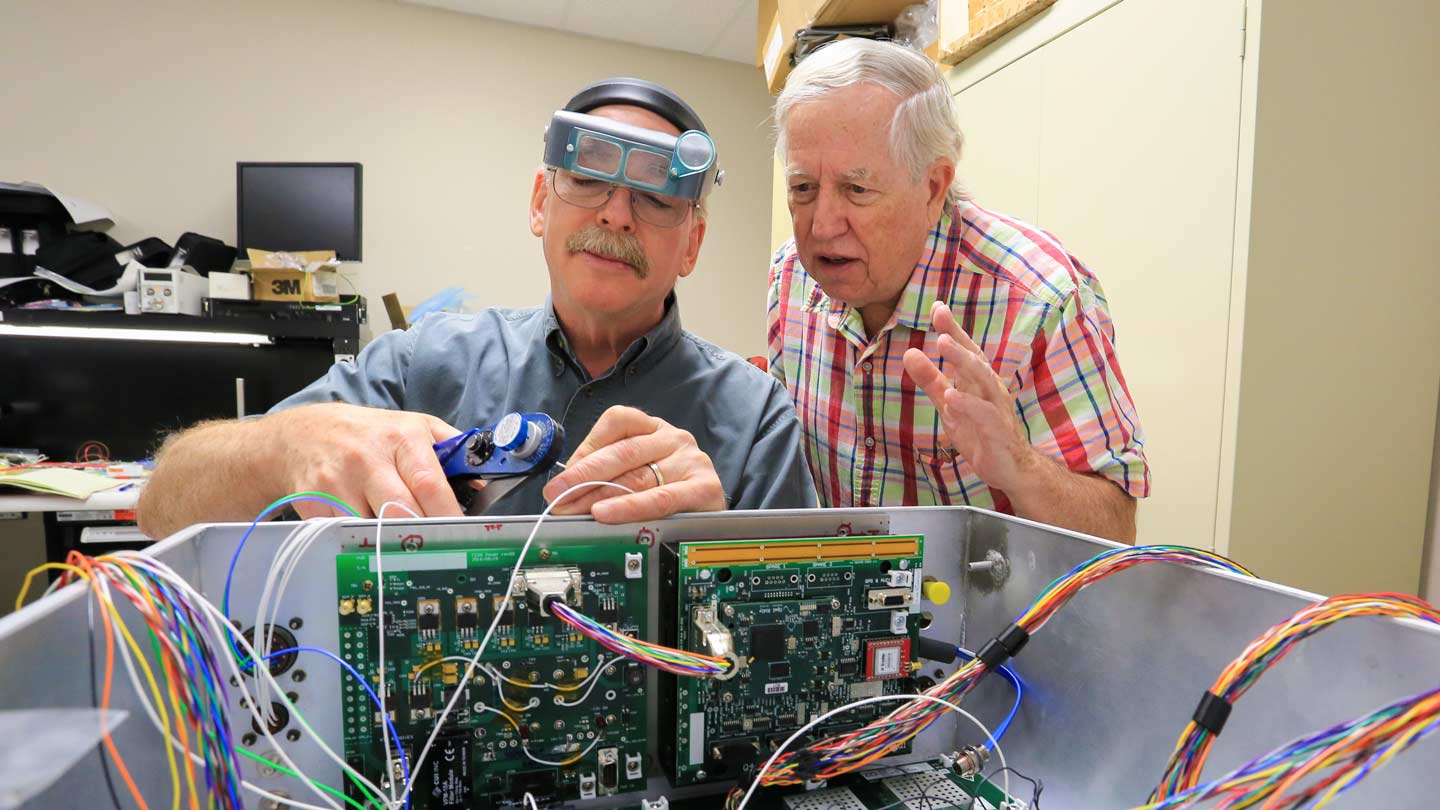 Dr. Hugh Christian is getting ready to watch 36 years of work rocket into space as science awaits the opportunity to better monitor the intensity and progress of storms to save lives and property on Earth.

Once successfully launched on Nov. 19 aboard the GOES-R satellite on an Atlas V 541 rocket from Cape Canaveral, Fla., the NASA/NOAA Geostationary Lightning Mapper (GLM) promises to make better "nowcasting" of dangerous weather possible.

Conceived by Dr. Christian, a principal research scientist with the Earth System Science Center (ESSC) at The University of Alabama in Huntsville (UAH), GLM was developed, designed, tested and some of its components were constructed at the National Space Science Technology Center (NSSTC) in UAH’s Cramer Hall in partnership with Lockheed Martin.

When the GOES-R satellite thunders skyward, GLM will be aboard as the second-most important instrument on GOES-R. And Dr. Christian will be onsite to watch the launch.

UAH was involved in the conceptual design as well as the detailed hardware development and actual construction of the instrument.

A single-channel, near-infrared optical transient detector, GLM will be the first operational lightning mapper flown in geostationary orbit. It’s designed to detect optical changes that are indicative of lightning. Constantly in the same position above Earth, GLM will view nearly the entire western hemisphere and record lightning events.

Research increasingly points to lightning jumps – a suddenly dramatic increase in the number of lightning events in a storm – as predictive of severe weather development. The rate at which lighting occurs is better observed from space than from the ground. The sooner such lightning jumps are detected the sooner advance warnings can be issued on the ground.

GLM will take a new image every 2 milliseconds, providing critical information to forecasters to allow them to focus on developing severe storms much earlier.

"We’ll be able to get to the actual physics of the lightning process," says Dr. Christian, including measuring the energy released in lightning strokes and determining whether the radiance of the strokes can help scientists better understand what lightning can tell them about the nature of the storms from which it comes.

None of this research or infrastructure was around back in 1980, when, as a NASA Marshall Space Flight Center employee who was hired to look into systems to observe lightning from space, Dr. Christian proposed a system that became GLM.

"There were no lightning networks at that point, and the networks that were eventually developed during the 1990s could detect only cloud to ground lightning," he says. "There was no comprehensive lightning detection system in place at that time."

Once scientific research began to establish the concept and viability of nowcasting, "it really accelerated GLM development," Dr. Christian says. 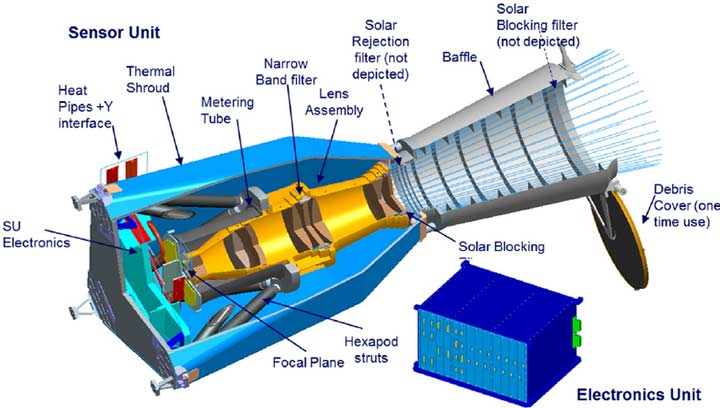 "Once interest in space-based lightning detection started to accelerate in the early 1980s, we began hiring people to work on the project at UAH," Dr. Christian says. "You’ve got to remember, that was back before there even was a Department of Atmospheric Science at UAH. That department didn’t come along until later."

By 2006, he had moved to UAH as NASA and the NOAA started development of the GLM. At UAH, he teamed with Mike Stewart, a UAH ESSC principal research engineer. The pair had previously worked in the mid-1970s to develop a balloon lightning sensor that recorded the first-ever measurement of vector electric field structures inside a thunderstorm. They rekindled their collaboration in the early 1990s to develop, among other things, the ground-based electric field mill network at Kennedy Space Center and the Lightning Imaging Sensor.

While teamed with Lockheed Martin, the UAH team conducted a feasibility study that added valuable momentum to the GLM effort. The project accelerated over the last decade, according to Stewart.

"UAH was involved in the conceptual design as well as the detailed hardware development and actual construction of the instrument," Stewart says.

"We had a number of novel developments on this instrument," Dr. Christian says.

One challenge was developing a variable-width pixel to compensate for the curvature of the Earth, so GLM could produce a distortion-free flat image of the western hemisphere. Another challenge was GLM’s real-time event processor, which had to be able to transmit data within the GOES-R satellite’s available bandwidth. The processor was entirely designed, built and tested at the NSSTC.

Then the team had to develop a system to generate simulated lightning in order to test the GLM sensors. It also developed, designed and tested the Fly's Eye GLM Simulator (FEGS), an instrument with 30 photometers set to several specific wavelengths of light, plus a wide-spectrum camera. FEGS will fly on an aircraft above the cloud tops, and will first be used to validate GLM’s performance.

FEGS, along with associated instruments, will also be used in separate experiments to measure extremely intense flashes generated by thunderstorms that are called Terrestrial Gamma-ray Flashes (TGFs), offering scientists a new tool to determine what processes are at work in generating TGFs and better understand the electrical properties that are at work in thunderstorms.

"We also developed the ground-based algorithms that will be used to process the GLM data once it reaches Earth," Dr. Christian says.

Dr. Christian will be holding his breath during countdown for the GOES-R launch, since a Sept. 1 Space-X supply rocket explosion has delayed the launch of another lightning instrument with which UAH is involved.

The launch of the Lightning Imaging Sensor (LIS) to be operational aboard the International Space Station (ISS) has been bumped to February or later by the Space-X mishap.

LIS is actually a 1997 technology developed collaboratively between UAH and NASA that flew as part of NASA’s Tropical Rainfall Measuring Mission (TRMM).

"The team was convinced that it might be a good idea to build a flight spare, just in case anything happened," says Dr. Christian.

Long housed in a clean room at the NSSTC, the flight spare is now awaiting the trip to the ISS. All the work to ready the flight spare for flight was done at Cramer Hall by the NASA-UAH team, including recalibrating the instrument and building the interface that allows ’90-era technology to fit on a modern cargo pallet and communicate through it.

"The irony of it all is that when I first wrote the proposal, we were selected to go as an instrument on Space Station Freedom," says Dr. Christian. "We got selected, but then we were de-scoped off the station and added to TRMM."