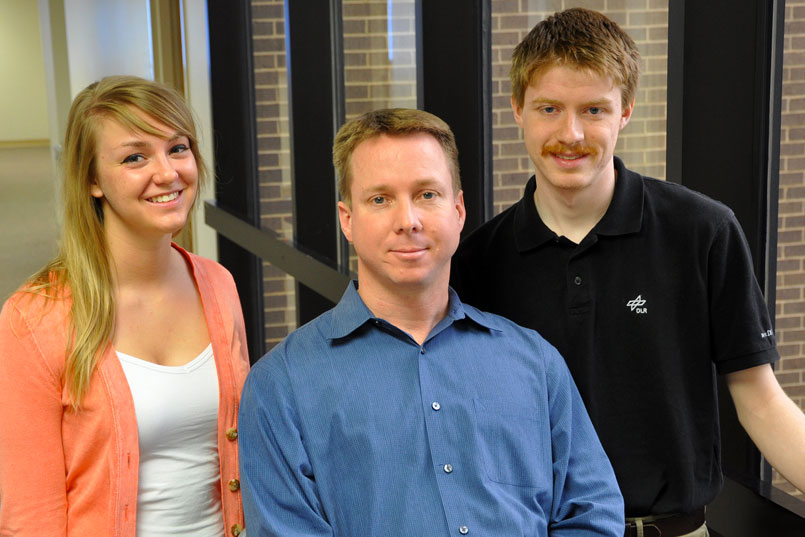 HUNTSVILLE, Ala. (May 2, 2014) – A U.S. Navy veteran who spent a decade "helping needy people all over the world" is one of three Earth system science undergraduates who will spend this summer conducting research funded through The University of Alabama in Huntsville (UAH) Research and Creative Experiences for Undergraduates (RCEU) program.

As a heavy equipment operator for the Navy Seabees, Robert Rossell dug wells, helped build schools and cleared roads to isolated and impoverished villages from Africa to the Philippines. This summer, however, he will work with Cameron Handyside in UAH's Earth System Science Center to study the impact expanding irrigation in Alabama might have on water supplies in various watersheds.

"We're going to develop tools to help decision makers in Montgomery make better decisions," he said. "We want to be sure we're not expanding irrigation at the peril of surface water."

A California native, Rossell has seen both drought and the tug of war between farmers and cities that is created by shrinking water supplies and increasing demand.

"To see so many other states and countries that are struggling with water management issues gives us an advantage," Rossell said. "Maybe we can see the storm coming before it hits us."

"Daytime and nighttime temperatures are going up, and we're trying to determine if that is due to global warming or local effects," Phillips said.

Phillips and Nair will use weather station and satellite data from 2005 through 2007 to study aerosol concentrations over Niamey, Niger's capital, where the population has increased from under 10,000 to about a million in the past 100 years. They will look for small particles frequently found in air pollution around population centers. These manmade particles are efficient at trapping heat rising from the ground, causing atmospheric temperatures to warm, especially at night.

"On days when certain aerosols are present, the temperature range between daytime highs and nighttime lows would shrink from 5 to 10 degrees," Phillips said. "The day side highs would drop a little, but the nighttime temps would peak dramatically."

Jeanné le Roux will use the new ISERV telescope aboard the International Space Station to look for new information about ancient cultures. On the large end of amateur optical telescopes — used on Earth for viewing planets and such — ISERV instead looks down at the Earth from space, providing low-cost, high-resolution photographs of areas the station passes over.

"We would like to preserve these sites, because you can learn from past cultures' successes and failures," le Roux said. "Often with these sites, when you look at the spectral images there is a lot you can see that you can't see just with your eyes.

"Things pop up on the map that you couldn't see before, because there are all sorts of traces that people leave behind."