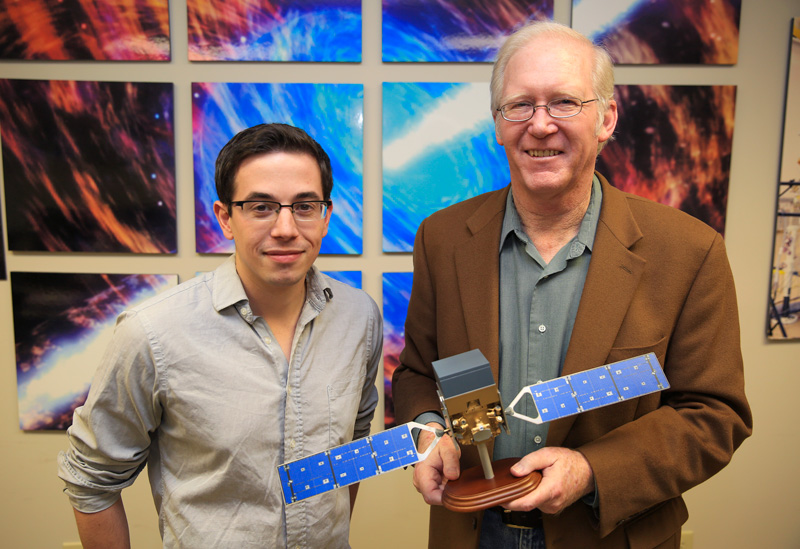 Dr. J. Michael Burgess, left, and Dr. Rob Preece with a model of the Fermi Large Space Telescope in the UAH Cramer Hall conference room where weekly teleconferences with German team members are held. Behind them is a graphic of a gamma ray burst.
Michael Mercier | UAH

HUNTSVILLE, Ala. (Dec. 10, 2013) - If recent news that University of Alabama in Huntsville (UAH) researchers observed the largest gamma ray burst ever has you nervous about getting blasted into extinction by a massive burst from space, the UAH researchers have good news.

The chances of Earth being fried by a burst are exceedingly rare. In fact, say Dr. Rob Preece, doctoral candidate J. Michael Burgess and Dr. Michael S. Briggs, Earth was actually at the center of the hit from April's big gamma ray burst, ­which they picked up on equipment aboard the Fermi Space Telescope that UAH and partners NASA/MSFC and the Max Planck Institute for Extraterrestrial Physics in Germany designed and tested.

Yes, we took a direct hit. But the collapsing star that created the burst was so far away that it was very weak when it reached us. Stars that collapse and produce these bursts are far away, the researchers say, in portions of the universe that were created early after the Big Bang event, portions where there are a lot of lighter elements that were flung far. Closer to Earth, there are a lot of heavier elements that suppress the collapse of stars.

"These bursts occur in younger galaxies," said Burgess. "We're in the oldest galaxy in our immediate universe because as you look deeper into space you are looking back into time."

So any burst generated out there will come from really far away where we can detect it early, and it will be a comparative pipsqueak by the time it gets here.

"As I was thinking about it, I realized that we would have ample warning," Dr. Preece said. The stars involved are huge. "They blow off winds that we can see well in advance. We would know ahead of time if one of these guys was ready to go off."

These bursts occur in younger galaxies. We’re in the oldest galaxy in our immediate universe because as you look deeper into space you are looking back into time.

The gamma ray burst created in these events is much more like a rifle than a shotgun. Unless you are close by and directly in the path, you're good. In fact, researchers are watching a star that's closer to Earth called Eta Carinae that's what they call a hyper-giant, ready to potentially collapse and release a gamma ray burst.

"But it would have to be pointed at us within 5 degrees of accuracy to do damage," Dr. Preece said. And while these events are regular across the universe, they only happen "once per million years per galaxy."

When a star collapses, it creates a phenomenon that looks like you've stuck your Dunkin Donuts coffee stirrer through the hole in your doughnut. The doughnut's center is a black hole, about which not much is known. The stirrer represents an incredibly powerful energy stream that scientists think is generated by the collapse - the gamma ray burst. 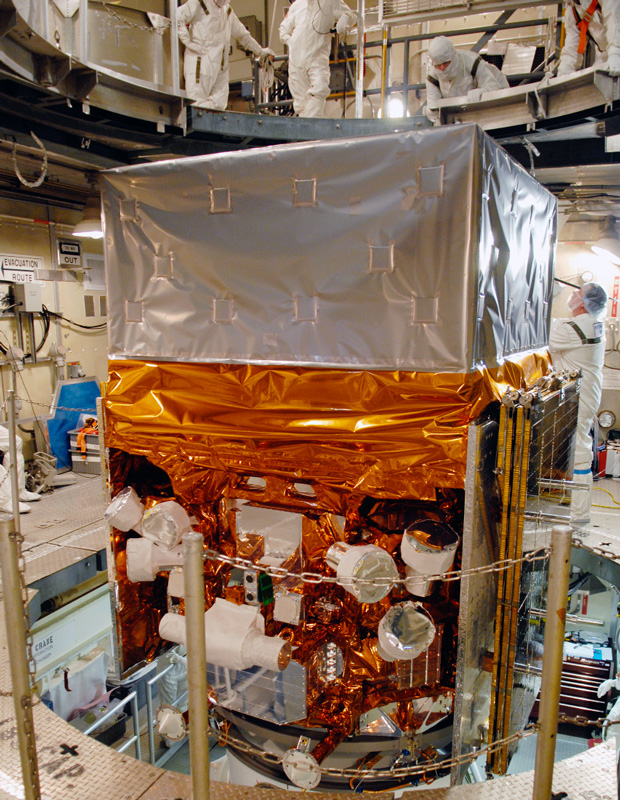 OK, now that we have been reassured about calamity, here's the beauty part: the research. The big burst was icing on the cake for the UAH scientists, who detected it as they were testing out some very complex mathematical models against real data they were collecting from 14 sensors mounted on the Fermi Large Space Telescope.

They had already done tests on other gamma ray bursts and were in the right place at the right time to witness the largest one ever recorded.

One reason the events leading to the origin and evolution of gamma ray bursts interest scientists is because they have many similarities to events that happened at the Big Bang. Understanding the phenomena could provide clues to the origins of the universe.

"We don't really know what is producing these gamma rays," said Burgess. "We think we know, and we think that it's because of a collapsing star."

Dr. Preece and Burgess have developed methods to measure the gamma ray spectra that may give insights into the origin of the bursts, called a jet by researchers. Instead of using theoretical constructs to test the methods, the UAH researchers are applying them to real world data from the Fermi telescope. The new methods are central to Burgess' doctoral thesis.

"For two years, we measured various bursts," Burgess said. "Then this burst happened and it was just perfect for what we needed to study." They've found that the models work surprisingly well and do provide insights into how gamma ray bursts work.

None of that real-world testing would have been possible except for eight years of design and testing of the 12 low-energy sensors and two high-energy sensors that are aboard Fermi. UAH developed performance requirements and the Germans, with their subcontractors, did the detailed design work and built the detectors. Dr. Preece and Dr. Briggs developed the ground and flight software.

"NASA wanted a gamma ray instrument and we are experts in gamma rays, so we proposed it," said Dr. Briggs, who is the UAH principle investigator for the Fermi Gamma Ray Burst Monitor (GBM), the official name of the equipment UAH, NASA and the Germans created to fly on the Fermi telescope.

From 2000 to the flight in 2008, UAH, NASA and Marshall Space Flight Center worked in partnership with the German institute and German companies to document, build and test GBM. A U.S. company, Southwest Research Institute, designed and built the flight computer.

Dr. Briggs and Dr. Preece were both deeply involved in the testing of the monitor system at locations from Huntsville to Phoenix to the District of Columbia, and in its integration into the Fermi telescope, to the point where Dr. Preece oversaw technicians as they plugged in the wiring. UAH scientists gather at Cramer Hall weekly to teleconference with German researchers, who have the same computer equipment and software there.