Doctoral student will use speedy computer for solar wind research 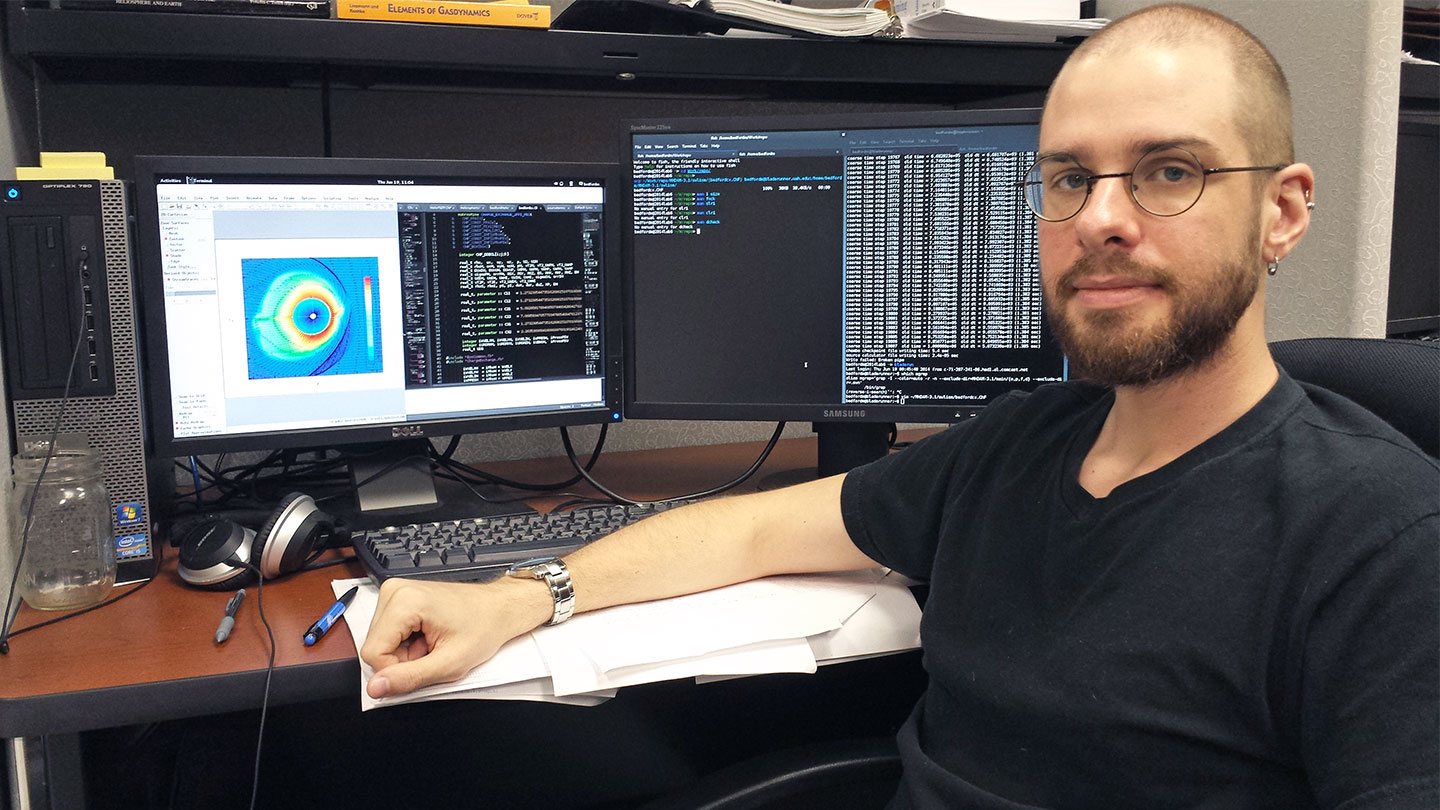 HUNTSVILLE, Ala. (June 23, 2014) – A student at The University of Alabama in Huntsville (UAH) Center for Space Plasma and Aeronomic Research (CSPAR) will research solar wind using the Cray Blue Waters supercomputer at the University of Illinois at Urbana-Champaign for the 2014-2015 scholastic year.

Matthew Bedford, a third-year doctoral student at CSPAR, has been awarded a Blue Waters Graduate Fellowship. He will model the interaction of the solar wind with the local interstellar medium using a new multi-ion model of the solar wind.

Bedford will receive a stipend of $38,000, a tuition allowance of up to $12,000 and an allocation of up to 50,000 node hours on the Blue Waters system. Bedford's advisor is Dr. Nikolai Pogorelov, a professor in the UAH Department of Space Science with whom he has been working to model properties of solar wind ("Modeling Solar Wind Flow with the Multi-Scale Fluid-Kinetic Simulation Suite;" Pogorelov, N. V.; Borovikov, S. N.; Bedford, M. C.; Heerikhuisen, J.; Kim, T. K.; Kryukov, I. A.; Zank, G. P., in Numerical Modeling of Space Plasma Flows, San Francisco: Astronomical Society of the Pacific Conf. Ser. 474, 2013, p 165).

Dr. Pogorelov is excited about Bedford's opportunity, which offers the possibility to work with the world-class experts in computer science and numerical modeling.

As far as science has come, there are still plenty of questions that haven't even been asked, let alone answered. It's good to be part of a team asking those questions.

Bedford says he's used Blue Waters for the past year as part of Dr. Pogorelov's team, but with this fellowship he'll have an allocation of his own.

"It is small by comparison – 50,000 node-hours, or enough to use the entire machine for a little over two hours," Bedford says. "However, it is enough time to write, debug and test code as much as I need and still run a few high-resolution, publication-quality simulations requiring thousands of nodes without spending my team's allocation."

Bedford won't even have to leave his UAH office to do the research. He'll link up with Blue Waters remotely.

"Mostly I will keep working in my office on campus. I have a nice computer setup there, and my advisor is nearby to help with the physics," he says. "If I have a problem specific to Blue Waters, I can ask for help online. I have met some of the staff on prior visits to Illinois, and they are very friendly and quick to help. By now, though, I am familiar enough with supercomputers to use them like any other development environment."

Hosted by the National Center of Supercomputing Applications at the University of Illinois at Urbana-Champaign, Blue Waters is the fastest supercomputer hosted by a university in the world. It uses hundreds of thousands of computational cores (central processing units) to achieve peak performance of more than 13 quadrillion calculations per second. It has more than 1.5 petabytes of memory, enough to store 300 million digital images; more than 25 petabytes of disk storage, enough to store all of the printed documents in all of the world's libraries; and up to 500 petabytes of tape storage, enough to store 10 percent of all of the words spoken in the existence of humankind.

"I never stop being amazed that I use a computer the size of a building as part of an ordinary workday. Doing original research gives the same feeling," says Bedford. "As far as science has come, there are still plenty of questions that haven't even been asked, let alone answered. It's good to be part of a team asking those questions."

The fellowship challenges students, Dr. Pogorelov says, because they are expected to make a difference and produce outstanding scientific results.

"When choosing fellows," he says, "the preference was given to candidates engaged in a multidisciplinary research project that combines disciplines such as computer science, applied mathematics, and computational science applications."

Bedford says that having programming capability is helpful in numerous fields.

"High performance computing is not just for esoteric physics problems. At the last Blue Waters Symposium I talked to users with degrees in math, physics, chemistry, computer science, electrical engineering, biology and even economics," he says. "Every day I learn something new and useful."