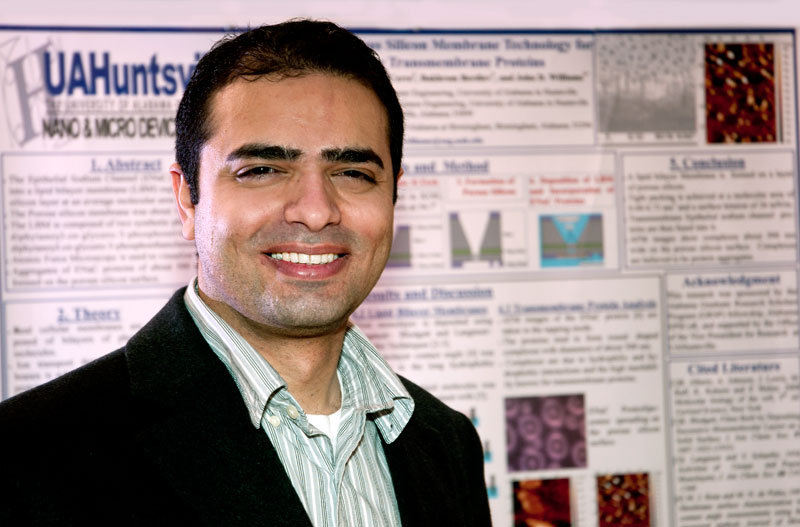 Dr. Kahlid Tantawi in front of a poster of his UAHuntsville doctoral work on porous silicon structures for transmembrane proteins.

The science is remarkable. Growing and electrochemically testing membranes and proteins across a porous silicon template has never been done before.

HUNTSVILLE (February 4, 2013) – Aerospace engineering was initially the allure of The University of Alabama in Huntsville for Khalid Tantawi, but ultimately the breadth of the university allowed him to expand his fields of interest and investigation in ways he did not initially expect.

A Jordanian who studied in France and is a newly minted UAHuntsville doctoral graduate in electrical engineering (August 2012), Dr. Tantawi said his academic and research growth was facilitated by UAHuntsville’s research facilities on campus, the university’s extensive collaborative ties with other universities, a sophisticated administrative support system and an encouraging environment of teamwork.

In France he studied aerospace engineering and the reputation of UAHuntsville was well known. “I first came because of UAH’s reputation in aerospace engineering,” said Dr. Tantawi. “When I got here and found they had a great program in MEMS (microelectromechanical systems), I explored that. The MEMS facility here at UAH is very advanced.”

Designing and building structures in a small world where many of the objects being engineered are not visible by the human eye and distance is measured in hundreds and thousandths of the width of a human hair was an awakening.

“At the beginning, when I first worked in microfabrication, I was overwhelmed,” Dr. Tantawi said. “When you get to this level, you can’t distinguish between engineering and biology and chemistry – it’s all the same.” He recalls performing experiment after experiment and experiencing failure after failure as he built the knowledge base and expertise needed while being guided by Dr. John D. Williams, Assistant Professor of Electrical and Computer Engineering and Associate Director of the Nano Micro Devices Center, whom he credits with his development in the field.

“Khalid and I discovered that we thought much alike, and I could speak his language scientifically,” said Dr. Williams, whose doctorate is in engineering science. “Not every student has the same experience here that Khalid did, but when you attend a university, you are there to explore. I look for the student who wants to take on a challenge. My job is to facilitate that and to collaborate.”

And it was a challenge.

"My main advice to students is to do the science that you like," Dr. Tantawi said."It takes a lot of effort before you get results, and if you are not doing what you like, you will soon grow discouraged and move on."

Dr. Williams said failure is part of the process. “Every Ph.D. student should fail. It’s necessary for learning. Learning by doing often requires several attempts, but the eventual success is often far grander than you previously imagined.”

The availability of a cleanroom facility and a scanning electron microscope in the Optics Building on campus were significant aids to his progress, Dr. Tantawi said. “The facilities are very important. We have all the equipment we need. The university’s administrative support through the research grants of the Office of the Vice President for Research was also invigorating. ”

The new porous silicon structure research resulted in a platform to support and extend the viability of proteins for scientific study.

“When biologists wanted to study these transmembrane proteins in the past, they put them on sol gel or mica based structures,” Dr. Tantawi said. Compared to the older method, the new structure better maintains the functions of the proteins, extending research time, and allows greater access to them for study. “We are trying to create an environment as close as possible to the native environment.”

“The impact of this is huge because you can make better drugs,” Dr. Tantawi said. “The problem with the proteins is that they are very complex and they exist in an even more complex environment.”

The protein functionality is determined by its chemistry as well as geometry, which in turn is sensitive to environment such as temperature, acidity or even presence of foreign surfaces, all of which affect the protein’s viability. Using the porous silicon structure addresses these issues and also provides means for study from both sides of the structure. Silicon is an ideal material because it is biocompatible, biodegradable, has luminescent properties and can be made porous – all of which better facilitate protein study.

“The science is remarkable. Growing and electrochemically testing membranes and proteins across a porous silicon template has never been done before,” said Dr. Williams, who conducts scientific inquiry with the multidisciplinary approach used when he worked at Sandia National Laboratories in New Mexico. “We have devices on a chip that we have measured to within 5 percent of values obtained by biologists in living organisms.”

The process involves creating the structure, depositing a lipid membrane bilayer onto it and then fusing the proteins to that layer. In cellular processes, proteins residing in lipid membranes “are so important that one-third of the human genome is used to engineer them,” Dr. Tantawi said.

“Each of them provided equipment and trained me on using it,” Dr. Tantawi said. “Collaboration is really important. Not many researchers can find this large a collaborative environment. At UAH, we can work with many universities.”

The work has appeared in a peer-reviewed publication, Journal of Medical Engineering and Technology, Vol. 37 no. 1, pp. 28-34 (2012). A second article is currently under review, and the third is being finalized now.

In another project, Dr. Tantawi was part of a team that created new means to fabricate structures needed to study microfluidics – the behavior, control and manipulation of fluids that are geometrically constrained to a small scale. Previously, the channels in these structures were constructed mechanically using micromachining and viewable only from the top and bottom by researchers.

The team developed a process using ultraviolet lithography to fabricate the tiny structures, which have passages much smaller than a human hair. Using a type of photosensitive glass that is selectively etched by the interaction of ultraviolet light and chemicals, the new process is less expensive, faster and offers more angles of view for study than the prior method.

Dr. Tantawi worked closely with undergraduate electrical engineering students Janeczka Oates and Jake Helton to complete this effort. Under the supervision of Dr. Williams, he provided training and research goals that each student worked to achieve over a three-month period. As a result both undergraduate students aided in and authored publications based on work done prior to their bachelors degrees at UAHuntsville. The work has appeared in two peer-reviewed publications, Journal of Microsystem Technologies, July 2012 (online) and Journal of Micromechanics and Microengineering Vol. 21 017001 (2011). A third publication on this research is expected this spring.

“Khalid came to me because he had an interest in what I do. He wanted to work in small scale devices and I offered him the chance to make these platforms,” said Dr. Williams, who added that learning how to interact and exchange ideas was the one overarching lesson for his student besides the engineering, “He’s the type of person who wanted to do it. I’m the type of person who had knowledge, ideas and connections to help him achieve his goals. Khalid not only learned science and engineering, but also how to collaborate independently with other people.”

Dr. Tantawi credits Dr. Williams and UAHuntsville with encouraging his sense of exploration and broadening his initial aerospace engineering interests into other fields of inquiry.

“At UAH, I had the opportunity to do any kind of research I liked,” he said. “With the University of Alabama System, there is also the opportunity to collaborate with other universities in the state. The teamwork has been very efficient.”