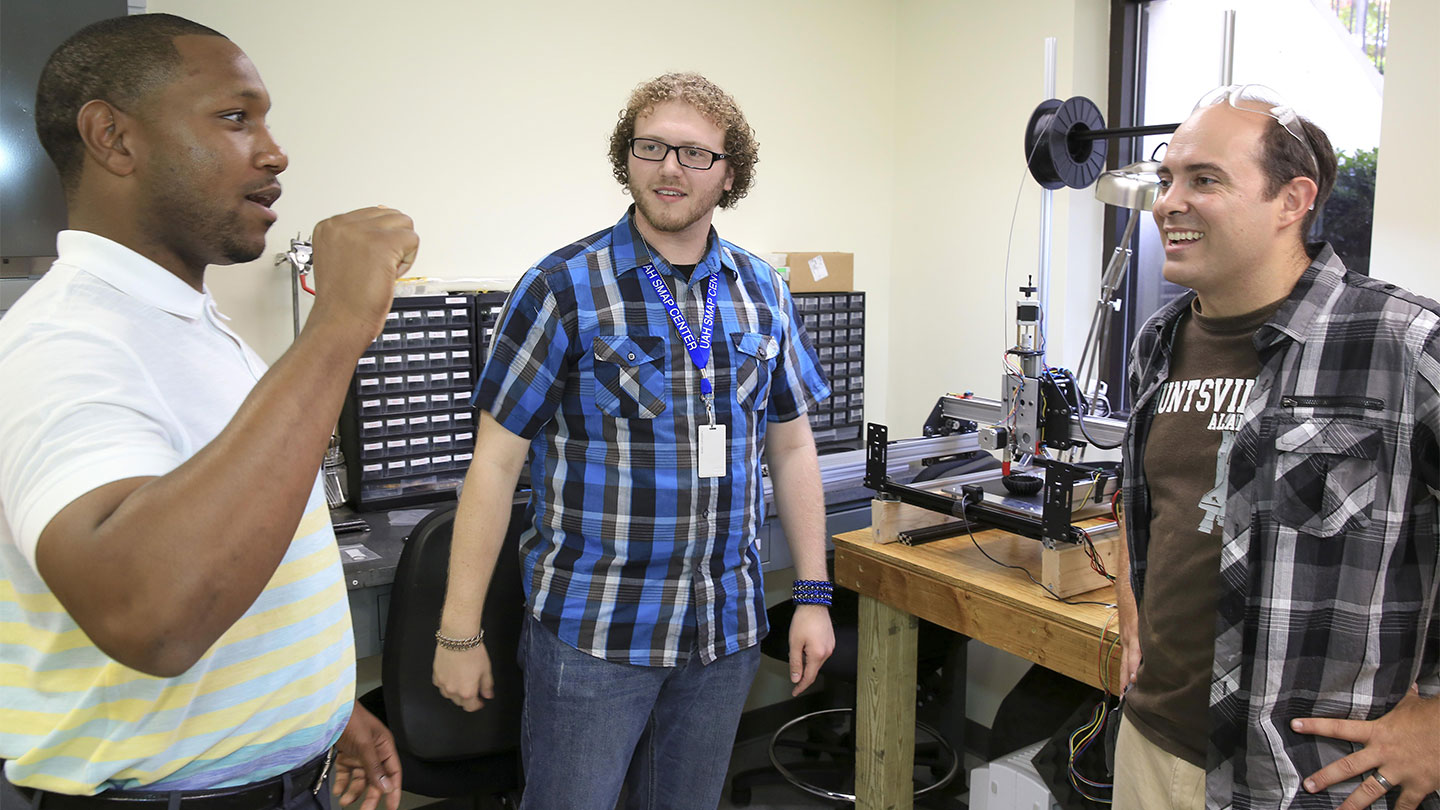 Jairus Morrow, left, communicates with Jesse Hairston, center, and Steven Forney, right, about the operation of a 3D printer at the SMAP Center. Michael Mercier | UAH 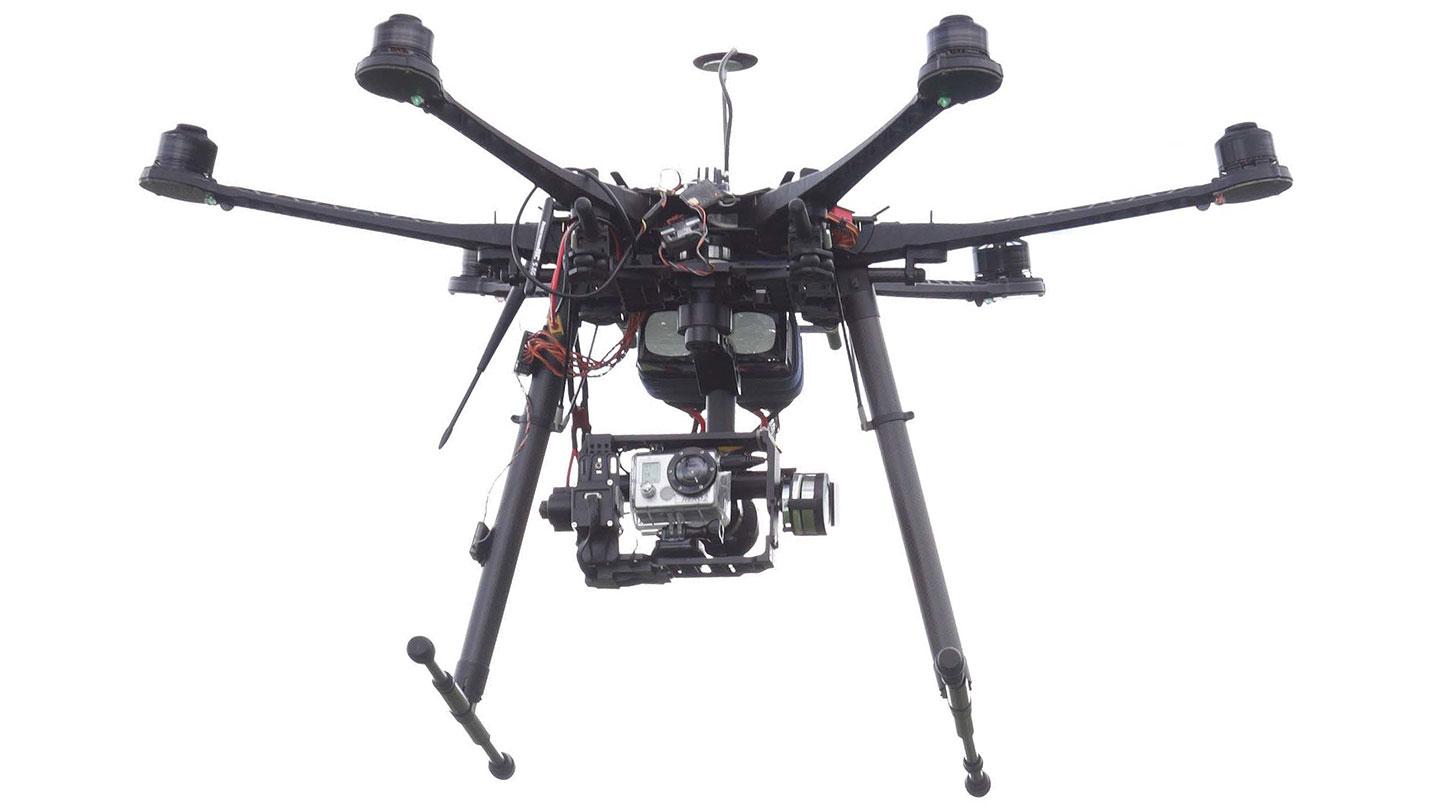 That's because Forney has been deaf since birth. Though he received cochlear implants in his 20s, American Sign Language (ASL) is his primary form of communication. Working alongside Forney, students learn ASL as well as the technical aspects of their jobs.

"The longer they work with me, the faster they learn American Sign Language," Forney says. "The challenging part is that every semester, there will always be new students coming in, and sometimes they will be 'speechless' when they meet me for the first time.

"I always remind them that there are other ways to communicate with me by using dry eraser white board, notes, tablet and learning ASL," he says.

Forney also encourages students to participate in a Deaf Day in which they wear earplugs to experience being deaf. "After this experience, they are better able to understand what it feels like to be in my shoes."

For his entire life, Forney says observations and experiments have been his strongest abilities.

"I may have lost one of five senses but I will always observe and explore surroundings with my four senses," he says. "I was raised in a military family, and I learned so much from my parents and from many other people not to allow limitations to overtake me. My mother always told me, 'If it doesn't work out on the first try, then observe it and find another way to work with it.'"

In 2012, Forney got his bachelor's degree in Electrical and Mechanical Engineering Technology from New York's Rochester Institute of Technology (RIT). He's now pursuing a master's degree in Human-Computer Interaction (HCI) in RIT's online graduate program. While an undergraduate, Forney contacted UAH SMAP Director Dr. Gary Maddox about the possibility of a summer internship to satisfy his engineering diploma requirements.

"After that, I continued my internships with SMAP because of the unmanned aerial vehicle work being done here," Forney says. "During my first internship, drones were introduced to me, and I fell in love with them. I wish to continue learning how the drones work.

"Drones and 3D printing technology excite me the most," he says. "With the 3D printing, we all could make use of this technology in drones for research purposes, because it makes it easier to design and produce something new or to manufacture parts to keep up with the drones' maintenance."

I may have lost one of five senses but I will always observe and explore surroundings with my four senses.

SMAP research aids Jesse Hairston, a UAH senior computer engineering major, and Jairus Morrow, an Alabama A&M University junior majoring in electrical engineering, first worked together with Forney on the Jackson County Schools Safety Initiative program. In that effort, for safety and insurance purposes they modeled the exteriors and interiors of that county's schools using unmanned aerial vehicles to photograph the outside and panoramic cameras to get images of the insides, then mapped the buildings on a computer.

They are currently working with Forney to develop techniques and equipment to 3D print replacement UAV parts.

"He knows a lot more than we do about the technological stuff, having a degree in mechanical and electrical engineering," says Hairston. "Last summer when I first came here I didn't know sign language, but after working with Steven awhile you just pick it up."

Morrow, who has been at SMAP since 2012 but just started working with Forney three months ago, has had the opportunity to put the sign language he's learned to use elsewhere.

In some situations being deaf can be an advantage, Forney has learned.

"From what I have experienced from past jobs, I always find myself fully concentrated on the projects in noisy environments," he says. "I landed my first job as a welder after I graduated from Alabama School for the Deaf in Talladega around 2003. As a welder, my pay was raised fast because I was able to complete projects five times faster than anyone else in the welding company.

"I thought it was just normal for myself until my boss mentioned that I was the most motivated worker because I didn't get myself distracted by people's conversations, loud objects being dropped and anything that made loud noises," Forney says. "A few years later, I worked at scene construction for the Rochester Institute of Technology. They often hired deaf students because they tended to work longer than any hearing student. They were able to keep up in the loud and noisy environment."

Forney found in his work life that while he was focused on a project, he sometimes was startled when someone came up behind him. That was the motivation to get the cochlear implant.

"Even with the cochlear implant, sometimes my deafness still limits my capacity when I am introduced to new drones with sound or buzzer built-in. Each drone's buzzer has a different sound," he says. "To overcome this obstacle, I ask somebody to listen to the buzzer and to explain to me what the sound means. Sometimes I cannot tell the difference between soft-long and medium-long beeps. I have to ask somebody else which tone-beep sound is correct. Then I will be able to memorize the sound for the next time I use the drones."

Forney was a big hit recently as the guest speaker at a summer Deaf Space Camp held at the U.S. Space & Rocket Center, where he demonstrated a Phantom Quadcopter and talked about his research.

"Most of the kids are either in middle or high schools," he says. "I talked to them about my life as an electrical/mechanical engineering major during college, and about my skills at my current job as a research associate. Also, there aren't a lot of deaf people in engineering out there today.

"I wanted to remind them," he says, "that they should not be afraid of what other people think."