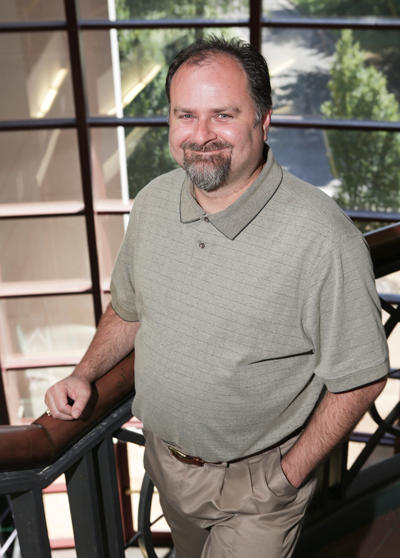 Research by UAH’s Dr. Timothy Landry shows that as much as 40 percent of retailers’ consumer support comes from community-building factors.
Mike Mercier | UAH

HUNTSVILLE, Ala. (September 16, 2013) - Getting immersed in the community and fostering a community atmosphere among customers aids a retailer's bottom line, whether the business is small and locally owned or a large global chain, according to research co-authored by a University of Alabama in Huntsville associate professor of marketing.

The lead article in the summer issue of the Journal of Marketing Theory and Practice demonstrates how retailers benefit from employment of four social functions associated with development of community - socialization, mutual support, social participation and social control. ("The Development of Core Retailer Community Functions"; Todd J. Arnold, Elten Briggs, Timothy D. Landry, Tracy Suter; Journal of Marketing Theory and Practice, Vol. 21, No. 3, Summer 2013) And fostering community is a huge chunk of the retail equation.

Retailers who want to reap the benefits of heightened loyalty and attract consumers who don't mind paying a bit more should actively build those kinds of community connections with their customers, according to Dr. Tim Landry of UAH's College of Business Administration.

"In these types of studies we can show that as much as 40 percent of retailers' support is due to these sociological factors," said Dr. Landry. "You're willing to pay more at a retailer if they are actively supporting the community."

Larger retailers seem to have adopted community-building practices more quickly than the small stores, which would appear to have greater need for the benefits of community because they are at a disadvantage to larger stores in terms of the traditional marketing strategies of product, price, place and promotion.

"If you are going to be local, you have got to understand what it is to be local," said Dr. Landry. "But I see increasingly that it's the big guys who understand this, not the little guys."

Dr. Landry and his collaborators surveyed over 200 non-student adult respondents in a large Midwestern city. They asked respondents to report on how a favorite retailer they chose, one they felt "connected" to, rated on the four community social functions, using a seven-point Likert scale that ranged from strongly agree to strongly disagree. Researchers probed how much each function affected the respondents' likelihood to be loyal to that store and to pay more for products.

In these types of studies we can show that as much as 40 percent of retailers’ support is due to these sociological factors. You’re willing to pay more at a retailer if they are actively supporting the community.

They found that business practices that encourage socialization by appreciating the core values and norms of a target group and making sure those are reflected in products and services are strongly influential in generating both loyalty and willingness to pay more.

"If you want to be a retailer that people feel really attached to, then your retail stores should reach out to the community through socialization," Dr. Landry said. "It tremendously affects your bottom line."

The concept of mutual support, in which a retailer supports organizations and activities that are viewed as part of a shared-interest community, was also positively associated in the research with customers' willingness to pay more. Examples include sponsoring a Little League team or a communitywide event. Loyalty is also a reward of retailer social participation, where the retailer facilitates interactions or gatherings between community members.

"The more of these you can do, the better off you are," said Dr. Landry.

Only social control, where a retailer establishes a structure of standards and rules that allow either the retailer or its consumers to enforce community norms for others, did not result in greater loyalty or willingness to pay more. An example of social control would be a larger retailer requiring censorship of certain musical lyrics on compact discs it sells.

Dr. Landry's interest in community and retailing began with questions about how small mom-and-pop stores could manage to survive and even thrive in smaller communities once large mass retailers moved into town. "They didn't compete, and yet they thrived," he said. "Once we learned more about what they did to thrive, we began to study whether the functions they played were unique to smaller retailers, or could larger retailers also play these roles."

Follow-up research is focusing on online retailers and how the community-building functions affect them. It's part of Dr. Landry's exploration of how businesses can create community by assuming some of the roles of past societal structures that are diminishing or changing in today's society. He said he believes that business has that responsibility in the communities that it serves.

"My research is headed toward answering the question, how do businesses play a role in supporting and bettering a community?"