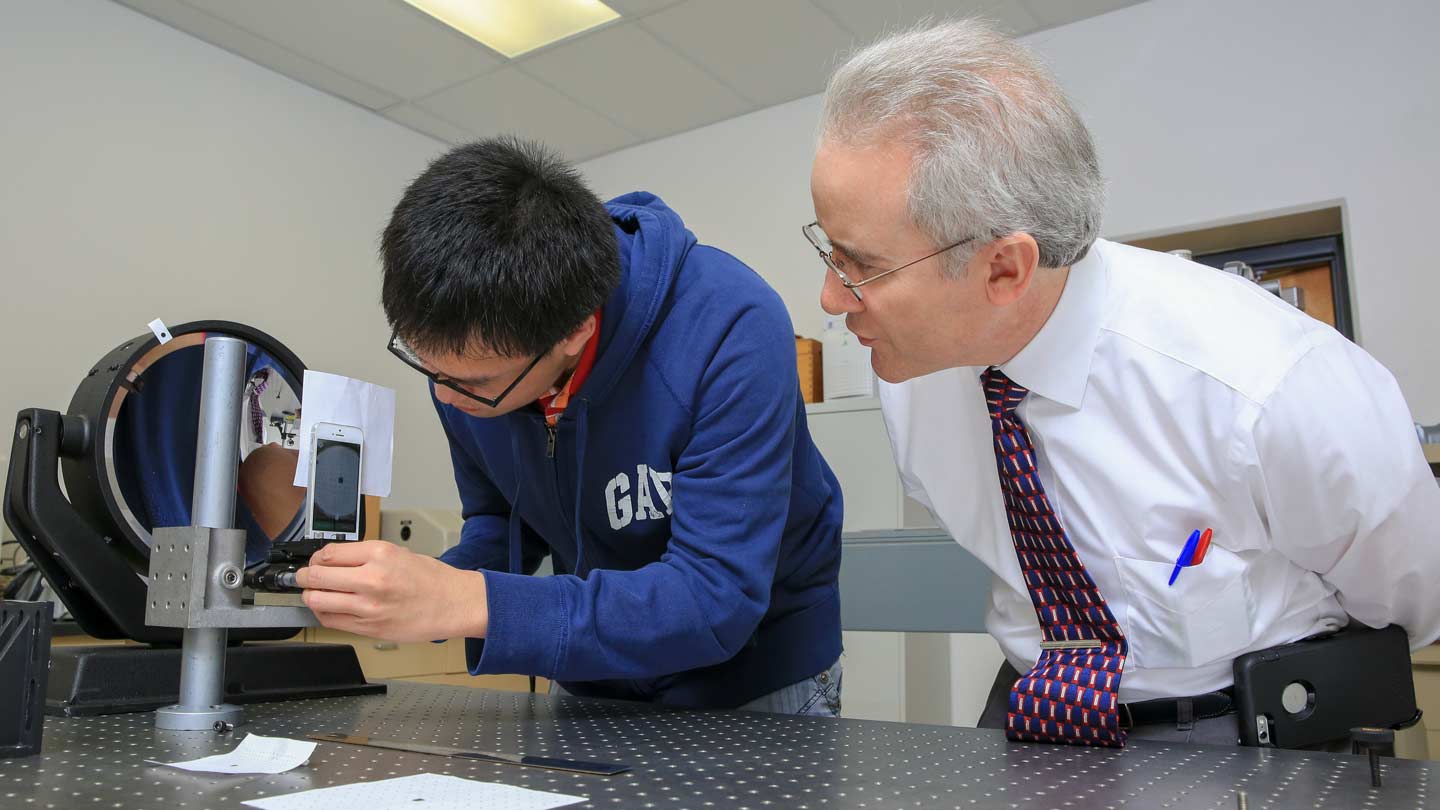 Associate Director of the Center for Applied Optics Dr. Patrick Reardon and graduate student Bojun Zhang use a cell phone app in conjunction with a Hartmann screen to check the curvature of a mirror.

Since its creation in 1985, the UAH Center for Applied Optics has been firmly established at the intersection of science and engineering, putting cutting-edge theory and research to use in everything from unique orbiting observatories to ubiquitous cell phones.

"We take concepts to creation," says Dr. Patrick Reardon, associate director of the center and an assistant professor in the Electrical and Computer Engineering Department. "We look at every phase in development including design, fabrication, test, assembly, alignment, calibration and even deployment of the optical systems."

Part of the growing appeal of optics research is the broad spectrum of applications, from cosmic to deceptively mundane. He points out that researcher Dr. James Hadaway makes regular trips to Houston in support of tests on NASA's next great space-based observatory, the James Webb Telescope, set for launch in 2018. Previously, Dr. Hadaway led the team that worked with the X-ray Calibration Facility at NASA's Marshall Space Flight Center in Huntsville to measure the performance of the telescope's 18 primary mirror segments in a simulated space environment.

We take concepts to creation. We look at every phase in development including design, fabrication, test, assembly, alignment, calibration and even deployment of the optical systems.

But other CAO projects are decidedly down-to-Earth.

"We've been supporting a company in the Atlanta area that produces clear plastic domes to cover security cameras," Dr. Reardon says. "The optics and the cameras themselves have been getting better, so the protective domes they see through have to improve, too."

The center is developing instrumentation that will allow the company to rapidly test and then tune their injection molding system, so they can quickly produce domes and parts that meet customer expectations, he says. But the CAO goes further by helping educate those customers about dome designs and ways of optimizing their camera's capabilities.

It's the same kind of attention the CAO provides scientists needing custom equipment or expertise.

"We are often the bridge between researchers and the data that they want to obtain or measure. We develop the deployable optics that will get them the data they want to see," Dr. Reardon says. "A lot of places can process data. Our interest is to try to create better data."

The results of their work can improve lives, and sometimes save them. The CAO-affiliated Nano and Micro Devices Center (NMDC) has a 7,000-square-foot clean room facility where, among other projects, researchers from across the campus are developing plasmonic sensors that can be used in devices to detect biological or chemical agents and contaminants. Plasmonic sensors rely on how the electric component of light interacts with free electrons in a metal to create new effects, or metamaterials.

Dr. Yongbin Lin is putting plasmonic structures on the end of an optical fiber to develop a small, supersensitive device that can provide for the early detection of cancer or other diseases at a patient's bedside, or at a remote location in a developing country. The prototype is using 100-nanometer gold dots at the end of a micrometer-sized optical fiber. "It's angels on the head of a pin," Dr. Reardon says.

The CAO also has agreements with six companies for use of the clean room facilities in commercial development research. "I think those relationships are good for everybody, especially when we can involve students who are going to be the prospective employees for these companies," Dr. Reardon says.

Much of the center's recent research and project growth involves the Dept. of Defense, and he is seeing increasing growth with NASA. This CAO research covers applied and fundamental investigations, and can be seen in imaging and remote sensing systems, and in labs. An overall increase in government-related projects has helped the center acquire new equipment and at least two new positions, which Dr. Reardon expects will lead to new graduate student research assistantships.

The center also has rare manufacturing capabilities that include a free-form polishing machine. These allow for in-house production of things like off-axis parabolic mirrors and other optics of higher quality but in less time and expense than 10 or 15 years ago.

They are also devising innovative metrology tools to ensure optical parts meet required specifications, he says. A senior design team in the optical engineering program (OPE) has turned a cell phone camera into a device that can perform optical metrology of mirrors, and now a graduate student is advancing the research.

"My goal is to make a smart phone as good if not better than what is now a quarter-million-dollar instrument that you have to house in a lab to measure these surfaces," Dr. Reardon says.

The CAO has 14 staff and faculty members, including the NMDC, along with six affiliated faculty and approximately 20 graduate students working in master's and doctoral programs. UAH's OPE program was the first accredited undergraduate engineering optics program in the country recognized by the Accreditation Board for Engineering and Technology Inc.

Dr. Reardon says he is seeing growing interest in optical engineering from high school students considering universities, and hearing from more graduates interested in continuing or coming back for master's degrees. The center supports the optical science and engineering program at UAH, which offers an interdisciplinary doctorate supported by the electrical engineering and physics departments.

There are not many optics programs in the country, and UAH's benefits from its proximity to NASA, the Army and federal agencies on Redstone Arsenal in Huntsville, he says. It also benefits from the high-profile role optical technology plays in modern culture and devices.

"Optics in general is an amazing, enabling technology," Dr. Reardon says. ""Working in optics means you get to work in biological sensing, or in rocketry to measure the flow of propellants with optical systems. Every industry is using optics – the Internet is based on optic devices and fiber optic lines, and your cell phone has a camera and a liquid crystal display. We're even working with companies that are developing intra-ocular lenses to correct for cataracts.

"There have been so many advances in our ability to produce things, to design, to analyze, to extract information to create completely new things," he says. "It's amazing."