HUNTSVILLE, Ala. (June 10, 2013) – Consuming caffeine could mute the efficacy of certain cancer drugs, and some traditional Nigerian medicinal plants target specific biomolecular pathways to be useful in the treatment of the protozoan that causes African sleeping sickness, according to research from The University of Alabama in Huntsville (UAH).

What do these two findings have in common? They both are part of the multifaceted work of Dr. William Setzer, professor and chair of UAH's Chemistry Department, who has collaborated on research ranging from isolating the active compounds in tropical rainforest plants to examining the possible health benefits oak barrels may impart to wines while they age.

As for the caffeine, Dr. Setzer explained that many cancer drugs target the DNA of tumor cells. They enter and bind between the strands of the double helix that forms DNA in a process called intercalation. Once there, the drug inhibits DNA replication and in turn the cancer cell dies. But the UAH research, done with Dr. Moriarty and then-graduate student Gabrielle Hill, shows that the presence of caffeine can impede that process. ("Attenuation of Cytotoxic Natural Product DNA Intercalating Agents by Caffeine," Gabrielle M. Hill, Debra M. Moriarity, William N. Setzer; Scientia Pharmaceutica; 2011; 79; 729-747)

"We think the caffeine is interacting with the anti-cancer drug to keep it from entering the DNA," said Dr. Setzer. The researchers performed in-vitro studies of MCF-7 breast cancer tumor cells to determine the cytotoxic effects of six drugs for that type of cancer known to work by intercalation. "Our data suggest that these particular groups of anti-cancer drugs are inhibited by the caffeine," Dr. Setzer said. 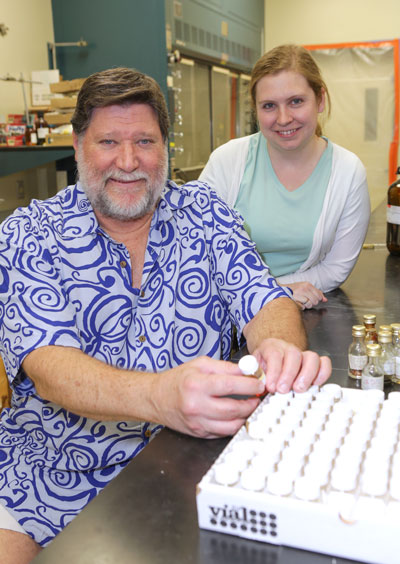 Dr. William Setzer, chair of the Department of Chemistry, with doctoral student Kaitlyn Deskins, who is studying the antioxidant properties of the Costa Rican lonchocarpus plant.

"There is a parasitic protozoa that causes African sleeping sickness," he said. "The current drug treatment for it is pretty rough on you. If it is caught early enough, the drugs can work, but once it is in the central nervous system, there's no cure."

It would have been very nice if we could have gone to a shaman and said, ‘What do you use?’ but there are none there.

In remote areas of Africa, traditional herbal medicine plays a key role, and many different plants are used for their anti-parasitic properties. But while researchers had already isolated their active compounds and demonstrated their efficacy in in-vitro tests, the method of their action was largely unknown. UAH researchers theoretically identified the protein and biomolecular targets in the parasites that the medicinal plants affect, an advance that can lead to further research in verifying and modifying the active compounds to increase efficacy.

"We screened the plant chemicals by computer to see if they fit into the active sites of the biochemical targets of the parasites," said Dr. Setzer.

The Natural Products Drug Discovery Group at UAH is the home base for such research. Begun over 20 years ago to study the medicinal properties of plants from the Costa Rican rainforest, it has branched out to African plant studies and now has an extensive collection from Queensland, Australia. The Australian rainforest collection is the result of four years of harvesting there.

"Initially, we were looking at anti-cancer activities and anti-microbial activities," said Dr. Setzer. "It would have been very nice if we could have gone to a shaman and said, 'What do you use?' but there are none there." Located on the Continental Divide of the Americas, the Monteverde, Costa Rica cloudforest is largely uninhabited. With the help of two field botanists in the country to identify the plants, collecting began.

"We would also use ecology as a guide," said Dr. Setzer. "If you find a plant that nothing has eaten on, then you would figure it has something in it to keep that from happening." Other collecting guides included using "indirect ethnobotany" to determine whether a certain plant's family was used medicinally elsewhere in the world, and also the smell of a plant.

"We would nick it with a knife and smell it," Dr. Setzer said. "I was going by this plant once, and I nicked it with my knife, and it smelled like pumpkin pie. So we took samples of it as something interesting, and we got a pretty potent anticancer drug from it. It still needs some work to synthetically derivatize it because the compound itself is too potent for use as it is. But we later found that in Brazil, it is used topically for melanoma."

Collected plants are typically processed into extracts by labs in the country of origin, and extracts are shipped to the NPDDG facilities in the UAH Material Sciences Building. Extracts are made before shipping because it can take large amounts of plant material to arrive at a concentration of active ingredients sufficient for study. Dr. Setzer said as much as a kilogram of crude tree bark is often needed to arrive at 25 grams of extract for research.

Once the extracts arrive at UAH, a team of graduate students, undergraduates and volunteers analyzes the materials for biochemical actions and possible uses. The NPDDG's work is currently expanding to include samples from the Bahamas, Yemen and Cuba - all waiting for UAH researchers to unlock their secrets.