Archivists race technology to save past research, records

With billions of dollars of past space research at risk of being lost forever, Dr. Charles Lundquist is running a race against technology and time.

Working as a volunteer since then, he spends his time sleuthing for past research from the Army, NASA and private papers, as well as collecting oral histories from NASA retirees and others. All are added to an archive on the ground floor of UAH's M. Louis Salmon Library, where Anne Coleman is a reference librarian and head of Archives and Special Collections. The archives preserve continued access for future historians, scholars and students.

"We're trying to leave to posterity an accessible archive where you can get to it in a usable form," Dr. Lundquist said. "If any university has the obligation, UAH has the obligation to preserve the records of lunar exploration and of all of that era. At UAH, we have an obligation to create this kind of archive and save this information because the university was really formed as a result of Dr. Wernher von Braun and space research coming to Huntsville."

Dr. von Braun was a vocal advocate for a research-based university in Huntsville. His vision spurred the University of Alabama Center, opened in 1950, into research and into science and engineering education. The center evolved into UAH. 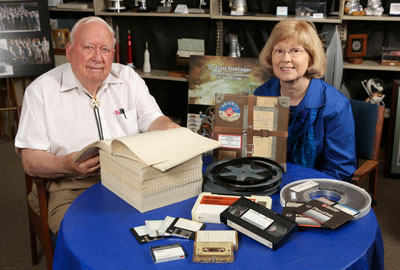 Michael Mercier | UAH
Dr. Charles Lundquist, director of Interactive Projects at the UAH Research Center, and Anne Coleman, reference librarian and head of Archives and Special Collections, with obsolete media containing data from the U.S. space program. The IBM printout that Dr. Lundquist is reading is the only surviving copy of the telemetry he needed for research from NASA’s Gravity Probe A mission. The original tape from the 1976 flight is no longer readable.

After arriving in 1950, Dr. von Braun assembled a team of about 120 German scientists and engineers to develop rockets for the Department of Defense and later NASA, America's space agency. "I got here early enough, in 1954, that I got to know the former Germans," Dr. Lundquist said.

A project to track down the biographical information on all of the original German rocket team members is being led by Dr. Lundquist.

"We're contacting the children of a lot of the original Germans," he said. "We interview them about their recollections and they bring us the papers of their fathers for the archive."

He is not only using information in the UAH archives but also is working with one of NASA's history offices at the nearby Marshall Space Flight Center, which houses an archive with thousands of documents, videos, and oral histories including many personal and technical papers written by von Braun and the German rocket scientists.

Likewise, the NASA Retirees Association and UAH have partnered to archive the oral histories of NASA retirees, with more than 100 recordings in that collection.

We’re trying to leave to posterity an accessible archive where you can get to it in a usable form. If any university has the obligation, UAH has the obligation to preserve the records of lunar exploration and of all of that era.

The race to save past NASA research is a marathon to catch up with today's information technologies. In addition to UAH's efforts, the Marshall Center is in the process of digitizing all its films and videos so that they remain usable, and they have digitized more than 10,000 documents, which are stored in a searchable database.

However, some have drained away because the media on which they are stored gets reused - as when NASA found it had recorded over its original tapes of the first lunar landing. A lot of information still exists. It's just that technology has bounded ahead and older storage media are no longer accessible.

Think 12- and 24-inch magnetic tape reels, or large floppy discs, or old reel-to-reel television recordings. Dr. Lundquist and Ms. Coleman have seen them all, and they are major impediments to today's academics, engineers and researchers.

"I'll give you an example," Dr. Lundquist says. "Just before the Apollo program, NASA launched some satellites that went around the moon to prepare for the coming lunar landing. They got some really good high-resolution cameras from the Dept. of Defense and took a lot of pictures of the moon.

"Now, all these images were stored on magnetic tape, and their full resolution was used to look at potential landing sites. But NASA only did the high-resolution data reduction on the few sites they had selected for landing sites, to see what was there."

The tapes were stored at the Jet Propulsion Laboratory. As time passed, the machines used to read the tapes were declared surplus and sold. A project worker, realizing they may have future value, bought three and stored them in her garage.

Fast-forward to 2004, when President George W. Bush set a goal for NASA to return to the moon. Suddenly, images recorded to prepare for Apollo had new value as a way to compare the moon's craters and features with those from 40 years earlier for a possible new landing.

It almost couldn't happen. NASA had no way of reading the tapes.

"A UAH graduate named Dennis Wingo managed to track down that lady who had bought those machines," Dr. Lundquist said. "He bought them and got a contract with NASA to refurbish them. Much of their electronics had to be replaced and they were covered with dust and mildew from sitting for 30-plus years in that garage."

More recently, Dr. Lundquist needed data from the 1976 Gravity Probe A mission for an investigation. "It was the most accurately tracked spacecraft ever," he said. "It went straight up and measured the gravitational redshift predicted by Albert Einstein. It was a very successful mission."

The material was at the UAH archives, so he could get his hands on it. But what he held were 24-inch reels of magnetic tape. Fortunately, he also located in the archive a six-inch thick stack of IBM printer paper with the data, sometimes faintly recorded.

"I was glad to see that, so I could continue with my research," he said. "I don't know where I'd have found someplace to read those tapes."

A pre-space age reel-to-reel television tape in the archives showed Dr. von Braun tutoring high-ranking military officials on what a satellite is and what it does. "I found a place that could read it and paid to get it transferred to a DVD so we could have it," Dr. Lundquist said.

The material comes in from many sources, official and unofficial. "We've had wives bring in their husbands and say, "He has to get rid of this stuff,' " Dr. Lundquist said. "Some of it comes from NASA or other sources. We get it in all kinds of ways."

Some of it also comes from NASA, which maintains the official record but often has more than one copy of a document. By adding the copies to the UAH collection, MSFC also provides access to students and others who use NASA archives on a daily basis.

"As one of the old-timers," Dr. Lundquist said, "I feel obligated to preserve as much as possible of this important period in history when man for the first time left the Earth to explore space."