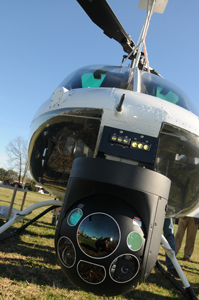 This sensor can transmit both visual and infrared images.

HUNTSVILLE, Ala. – The Product Office for the AH-64D Longbow Apache Block III (AB3) conducted a demonstration of a new capability that will enable collective Manned-Unmanned Teaming (MUMT) training using a manned helicopter.

The AB3 National Airspace Trainer (AB3NAT) was demonstrated to the Program Executive Office for Aviation leadership and local news media members for the first time and showed that a manned platform is capable of being a UAS surrogate and emulate the capabilities of Manned-to-Unmanned-Training (MUM-T). MUM-T is the ability for manned platforms such as the Apache to receive full motion video from a UAS and control the UAS payload such as its cameras. The AB3NAT is capable of providing Level of Interoperability (LOI) 2-4, meaning it can control the flight path and payloads of a UAS.

"The AB3NAT, initially developed as an essential risk reduction effort to the upcoming Apache Block III IOT&E (Initial Operational Test & Evaluation), will also provide additional training capability that can be employed by tactical units without the normal restricted airspace limitations of UAS operations,” said Col. Shane Openshaw, Project Manager for Apache Attack Helicopters. “The team that designed, developed and tested the AB3NAT has done an outstanding job on this entire project, setting the stage for the future - a future in which the Army will benefit for many years."

Engineered, developed and tested in Huntsville, AB3NAT is a flexible system that provides MUM-T capabilities without the restrictions associated with a UAS that currently have to operate in restricted airspace. The AB3NAT ultimately addresses the need for collective MUM-T training when multiple assets are not organic to one unit.

Because it takes coordination and training with multiple aircraft that are not necessarily organic to one unit, the AB3 Product Office came up with a solution that allows units to conduct collective training.  “When you look across the U.S. where units that have UAS are located, they’re not able to train on MUM-T without deploying to another location that has restricted airspace,” said Lt. Col. Dan Bailey, Product Manager for Apache Block III. 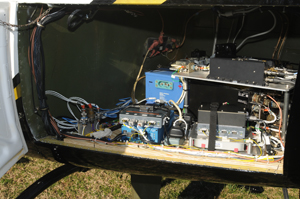 UAHuntsville students helped develop software that allow pilots to operate an unmanned aircraft system while flying their own aircraft.

So the AB3 Product Office engineered and built the AB3NAT in collaboration with The University of Huntsville (UAHuntsville) Alabama and Momentum Foundation (a non-profit organization that is affiliated with UAHuntsville). The OH-58 used in the demonstration operates from the XP Services hangar in Tullahoma, Tenn.

Like many projects, this one was met with certain challenges that if not for the serious combined efforts of the AB3NAT team, may have delayed or even cancelled the effort, said Capt. Jeffrey Belcourt, Assistant Product Manager for AB3. “This team consisting of UAH, Momentum Foundation and PM Apache (AB3) definitely congealed for the good of the effort and the larger supporting picture.”

The idea for the AB3NAT was borne out of lessons learned from the AB3 Limited User Test that was conducted in November 2008, which included testing the MUMT capabilities of the AB3 aircraft with a substitute UAS that operated under airspace restrictions such as all other UAS systems. “The lesson learned there was we don’t go to IOT&E without having collective training completed beforehand,” said Bailey. “This initial contract provides us the collective training needed prior to IOT&E. It will be available to the unit to do as much collective training as they want to do,” adding that with AB3NAT, units can conduct MUM-T training with virtually no restrictions either on UAS availability or airspace.

“The purpose of this is to risk mitigate the lesson learned from LUT,” said Bailey, using a system that is very flexible and provides the realistic training feedback to any manned platform. The AB3NAT ultimately provides a possible long-term solution to conduct collective training by units located anywhere in the Continental United States (CONUS) where UAS assets would be stationed.

“We want to thank the U.S. Army Aviation Program Executive Office and the Apache Project Office for the confidence they have placed in our center and university,” she said. “We especially appreciate the efforts of Col. Shane Openshaw, Lt. Col. Dan Bailey and Capt. Jeff Belcourt for the leadership in this important program.”

AB3NAT was designed with total flexibility in mind. It can be used in the current configuration, kitted for any non-specific Army aircraft or put on a pylon of a unit’s organic aircraft in the form of a pod that will enable that unit to have its own capability. “You can kit this in any way you want. You can kit this on an LUH Lakota helicopter that the National Guard has and all the training facilities the Army has across the U.S.,” Bailey said. UAS units can also use the system for their own UAS operators, place them in a manned aircraft with NAT capability and conduct MUM-T training in terms of the voice communications and coordination with other manned aircraft that occurs during MUM-T. 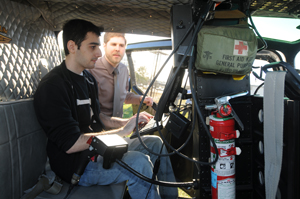 The AB3NAT provides an exponential game-changing capability that the Army already has with MUM-T and will enable Soldiers to be able to train in all different LOIs at any given time and any given place. Units will now be able to train on MUM-T in their own respective unit locations and fly in any airspace. AB3NAT provides increased capability and flexibility, an increase in training opportunities, and cost savings in terms of funding and unit dwell time at their home stations.

The next step for the AB3 Product Office is to collect feedback from Soldiers training with the AB3NAT and will provide further improvement of the system through continued analysis and evaluation. PM AB3 intends to prove the system first during the AB3 IOT&E in March and provide the Army with all the options available to leverage the capabilities of the AB3NAT.