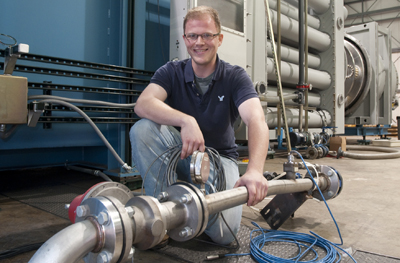 HUNTSVILLE, Ala. – Can a device formerly used to test nuclear weapons effects find a new life in rocket propulsion research? That is the question in which researchers at The University of Alabama in Huntsville seek an answer.

A new massive device is being assembled at the university’s Aerophysics Research Center on Redstone Arsenal, where a team of scientists and researchers from UAHuntsville’s Department of Mechanical and Aerospace Engineering, Boeing and Marshall Space Flight Center’s Propulsion Engineering Lab are busy putting together a strange looking machine they’re calling the “Charger-1 Pulsed Power Generator.” It’s a key element in furthering the development of nuclear fusion technology to drive spacecraft.

The huge apparatus, known as the Decade Module Two (DM2) in its earlier life, was used on a contract with the Defense Threat Reduction Agency (DTRA) for research into the effects of nuclear weapons explosions.

UAHuntsville was first informed about its availability in 2009, several years after the research contract for which it was originally designed came to an end. Reassembling several huge pieces of industrial equipment, the components were delivered in five shipments to the Aerophysics Research Center from San Leandro, Calif. When assembled, the unit will tip the scales at nearly 50 tons, and will be “one of the largest, most powerful pulse power systems in the academic world,” according to university officials.

With all units now in place, UAHuntsville engineering professor and project head Dr. Jason Cassibry says the team is busy cleaning up the components, which picked “a lot of dirt” after sitting in a lab for nearly 10 years, then being shipped across the country. Refurbishment will include replacement of about 100 large resistors, and securing 15,000 gallons of transformer oil for the Marx tank, which holds the capacitors and prevents arcing between them. “That’s a big hurdle, but we’ll get there,” says Cassibry. “We’re interested in deep space exploration. Right now humans are stuck in low earth orbit, but we want to explore the solar system. We’re trying to come up with a system that will demonstrate ‘break even’ for thermonuclear propulsion.”

Despite the hydrogen bomb images this machine may evoke, Cassibry cautions it is completely safe. More importantly, research using the Charger-1 pulse power generator could change the entire way rockets are propelled and revolutionize space travel. Since the dawn of spaceflight in the late 1950s, the world’s rockets have relied on chemical reactions of various fuels, such as kerosene or liquid hydrogen, to provide the thrust needed to launch and propel spacecraft. Launch vehicles have to be designed to carry thousands of tons of fuel, and rocket engines that could lift these massive loads along with the relatively lightweight payloads.

Nuclear fusion propulsion would reduce fuel needed to a few tons instead of thousands of tons. More importantly, it could reduce a trip to Mars to six weeks instead of six months, which reduces bone density loss and other effects of prolonged weightlessness on crew members. A launch would be somewhat like assembling the international space station, Ross Cortez explains. He is an aerospace engineering Ph. D candidate from Alpharetta, Ga. (Milton High School). Multiple launch vehicles would put the required components into orbit, where the spacecraft would then be assembled. The pulsed fusion engine would then launch the spacecraft from this higher Earth orbit. After achieving mission velocity, the engines would be turned off and the spacecraft would coast to its destination.

Crew members would feel the power as a series of pulses like a light tapping – not the common misconception of a full-throttle acceleration that would keep them pinned to the backs of their seats. Cortez describes the fusion principle as “taking two light atoms and smashing them together, which releases massive amounts of energy.” Similar to the process used by the Sun for billions of years, atoms of heavy hydrogen, or deuterium, combine with isotopes of lithium to release the energy required for thrust. Another way to look at it, Cortez says, is to liken it to a lightning strike, when an electrical current blasts through the fuel to compress the atoms, which achieve the reactions needed. Cortez likes to use a colorful analogy to explain the process. “Imagine using a 1-ton TNT equivalent explosive and putting it out the back end of a rocket. That’s what we’re doing here.” Those pulses come from a bank of large capacitors, known as a Marx bank, which stores electrical charges for release on command. The wires, some composed of lithium 6 and others of lithium deuteride, provide the power pulses. 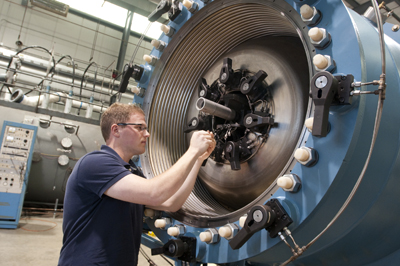 “We plug the wire array into this machine,” explains Cortez, “and a massive jolt of energy is fed into the array, which vaporizes into a plasma which we collapse into a Z-pinch.” The Z-pinch effect, he explains, is the compression derived from the plasma’s own magnetic fields. Cassibry says the Z-pinch is “the equivalent to 20 percent of the world’s power output in a tiny bolt of lightning no bigger than your finger.”

Energy gain is another important factor in nuclear fusion propulsion where, Cortez says, “we need to get more energy from the reaction than we use to initiate it.” That would be a major breakthrough, but Cassibry says an important milestone will be to simply achieve “break even” – the point where the energy derived from the pulse system equals the energy put into it. Though the concept of nuclear propulsion has been around for decades, Cortez says it has only been recently that engineers have been able to create the needed reactions and control them. This has been the Holy Grail of energy propulsion technology. The massive payoff is that energy gain, where we get more energy out of the reaction than we put in. This is what everyone has pursued since the time we first started thinking about this.”

The researchers say Charger – 1 is an important tool that will help them ultimately achieve the goal of practical thermonuclear propulsion.

“Charger 1 won’t come close to break even, but will give us ability to conduct experiments that optimize fusion energy output,” says Cassibry. “Our ultimate goal is to build a break even fusion system that will propel humans throughout the solar system.”