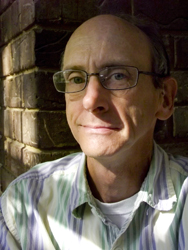 HUNTSVILLE, Ala. (January 23, 2012) - The academic and early life lessons that Glenn Haynes ('79 BA Piano) learned while attending The University of Alabama in Huntsville helped to chart his course on the national music stage.

Recently, two of Haynes' compositions, My Lord, What A Morning, and Five Miles From Home, were aired on NPR's syndicated classical music radio program, Performance Today. Haynes' extensive experience has been based in church music, composing and conducting.

Haynes' recently aired pieces are two of four that were requested for a new album project by Stephen Pollock and the New Century Saxophone Quartet (NCSQ). Pollock is a tenor saxophonist and a founding member of NCSQ.

Haynes' musical career began when he was a youngster growing up in Madison (Alabama). "I started piano lessons as a child and, thanks to Mom, stuck with it to a self-sustaining point," he said. He attended Bob Jones High School and played in the band. "I began with a clarinet in middle school, because it was the instrument the family had.

"One summer I learned the valve positions on a cousin's trumpet, and earned my parents' permission to switch instruments," he said. "I still enjoy playing trumpet with quartets/quintets. I was active in church music, singing, and later playing piano for the youth choir, and from age 15, playing organ for church services. I also sang in the school chorus…. I was bright but not disciplined, so I was far from a straight-A student."

Haynes' decision to attend UAHuntsville was easy. His mother worked at the university as a department secretary and his brother, Ken, was an engineering student. "However, with 'rocket scientists' for family and neighbors, I forsook music as a major for biology -which somehow I thought more practical. During my first few semesters, I learned a few critical things. First, I learned that as a church organist I could earn enough to pay a good portion of my school fees, and figured I could earn a living as a musician. Second, the micro and chemical aspects of biology really bogged me down. And third, I really excelled in my music courses."

But one of the most valuable lessons Haynes learned during his undergraduate experience at UAHuntsville was: "I didn't know as much as I thought," he pointed out. "I was amazed at the depth of knowledge of the professors. I quickly learned that my average-good intelligence masked some grave deficiencies in discipline."

Intrigued by his music theory tests, Haynes said he would glance around the room, and see flute players air-playing, their instruments then writing down an answer. "A trumpet player would do the same, and so would pianists. I thought it was an amazing insight into how musicians visualize their music - or at least the mechanics of it."

Haynes vividly remembers his UAHuntsville music professors, and the impact they had on his career. "Dr. Frank Contraras was my senior-year piano teacher. The Music Department was fairly small at the time (1974-1979), which allowed me to be a "big fish" somewhat. Dr. Max Pales let me hear one of my little compositions, played by his string quartet.

"Dr. D. Royce Boyer allowed me to accompany choirs some, and, even to conduct a little," Haynes said. "I nervously conducted Faure's 'Cantique de Jean Racine,' in a local radio broadcast - an experience I will never forget. My brother, Ken, sang in the UAH Concert Choir. Boyer, who had taught Ken, was legendary in his taking the UAH Village Singers on USO trips abroad. I managed to get in on their cultural exchange trip to Guatemala in 1979. Dr. Boyer's ability to visualize projects of that scope, and to pull the resources together, continues to amaze me. His choral programming has been an example to me in my church work throughout my career. I couldn't have asked for a better music education, although I could have taken better advantage of it."

Haynes, who recently retired from a career of more than 30 years in church music, said the field suited his wide variety of musical interests. "I wrote many arrangements in units, so they were flexible to be used with winds, mixed with strings, brass, or with the organ or even piano alone.

"Church music allowed me to recruit, organize, and conduct a variety of choral and instrumental groups," he noted. "I became intrigued with writing arrangements to enhance congregational hymn-singing, and also some anthem accompaniment transcriptions, and remember the intense satisfaction of seeing those worship moments come together."

Since graduating from UAHuntsville in 1979, Haynes returned once to the university while preparing his masters' piano recital. "I was able to come 'home to Huntsville,' and present the recital in Roberts Recital Hall. One day, perhaps, I would like to teach some conducting or theory or composition."

Haynes broad interests are not limited to music, but reach into art and photography. "I am in the process of purchasing a building where I live in Statesboro (Georgia) for art and music studio, teaching and retail space. I also plan to 'package' and make available my arrangements from over the years - most for average musicians in traditional worship settings, but also some short things for chamber groups and a few teaching pieces for intermediate piano students."

Haynes has sage advice for today's young people considering a career in the music industry.

"Creative talent … discipline … tenacity … business sense … and maybe a rich benefactor …," he said. "I'm thinking you ought to have three of the five. Second, early on, I did not have an appreciation for the rewards of a career as a school music teacher. I regret that. Finally, I'd say that for those with a genuine interest in ministry and a medium-thick skin, church music can be an amazingly rewarding and good-paying career."

Haynes also holds a master of music degree in piano from Ball State University, and a DMA in church music and conducting from the Southern Baptist Theological Seminary.