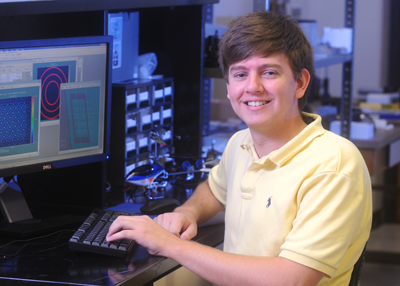 HUNTVILLE, Ala. — A student from The University of Alabama in Huntsville has won a national award for optical design and engineering research.

Josh Walters was among the winners of the 2012 Robert S. Hilbert Memorial Optical Design Competition, an annual competition held in Mountain View, Calif.

The competition is open to students in North America working toward a bachelor's, master's, or Ph.D. degree who utilize Code V or Lighttools software who have submitted papers that demonstrate optical design excellence.

The goal of Walters' design is to reduce crosstalk in an imaging system that uses an array of lenslets, so that the resulting image of each channel is clearly distinguished. This work will aid those researching the benefits of non-traditional imaging systems, similar to the compound eye found in insects.

"We believe it is important to encourage the next generation of optical engineers by recognizing and showcasing their talents in our annual student design competition," said George Bayz, vice president of the Optical Solutions Group at Synopsys. "The entries we received reflect strong design concepts that were well executed and presented and show promise for optical systems across a broad range of applications."