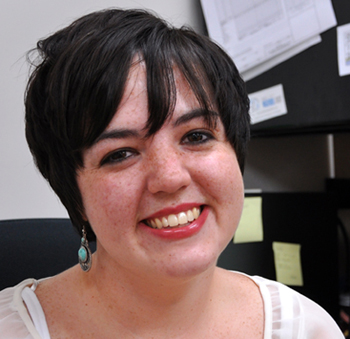 HUNTSVILLE, Ala. — Emily Foshee, a graduate student at The University of Alabama in Huntsville, has won a NASA Earth and Space Science Fellowship for the 2012-2013 school year.

Foshee, a student in UAH’s atmospheric science master's degree program, is the only student from a university or college in Alabama to win an NESSF award this year. The fellowship includes a $30,000-a-year stipend to support her graduate school research.

"This is a really great opportunity and I'm really thankful to have it," said Foshee. "Ultimately, I would like to get into the research field, possibly with NASA, so this fellowship is a good step in that direction. Plus, I can reapply for extensions for an additional two years, so it might end up funding a Ph.D. program for me."

Her research project continues work she did this year with UAH's Information Technology and Systems Center (ITSC), studying potentially damaging wind events that blow through mountain passes or gaps around the world, with the goal of developing methods for forecasting these dangerous storms.

Foshee and her advisor, Dr. Udaysankar Nair, will spend the next year working with ITSC scientists to identify past wind events at three mountain gaps in Mexico and Central America. They will use neural network "learning" software developed at ITSC to look for weather patterns before those events that might be used to forecast similar future events.

"Some of these high wind events can almost get up to hurricane force, so being able to forecast them is something that is of interest to not only people who live near those gaps but also to shipping and aviation," Foshee said.

Because many of these mountain gaps are in areas where weather stations are sparse, the team will use a wide range of weather data collected by NASA and NOAA satellites over the past several decades in their search for predictive pre-wind event weather patterns.

Foshee is the third of Nair's students to win an NESSF grant. The research conducted by the first two led to follow-on research projects with more than $1.2 million in additional funding.

More information about NASA's NESSF program and the 2012 awards can be found at: http://science.nasa.gov/researchers/sara/grant-stats/nasa-earth-and-space-science-fellowship-nessf-selections/