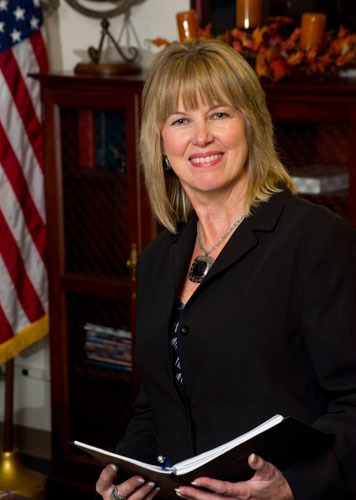 HUNTSVILLE, Ala. — Teresa B. Vanhooser (MS ’86 - Administrative Science) has been chosen for the position of deputy director of Marshall Space Flight Center.

Ms. Vanhooser has been serving as manager of Marshall’s Flight Programs and Partnerships Office (FPPO) since September 2011. In that role, she was responsible for overall management and direction of the office, including an annual budget of $108 million and a combined workforce of more than 400 civil servants and contractors.

She held primary responsibility for managing the implementation of the center's work portfolio in the areas of human exploration projects and tasks; flight mission programs and projects; and International Space Station (ISS) integration and operations. The office also identifies opportunities to develop and maintain partnerships with other government agencies, and international and commercial partners that will help achieve NASA’s vision.

“It’s gratifying to watch our graduates as they progress throughout their career,” said College of Business Administration Dean Caron St. John. “We’re proud of Ms. Vanhooser’s accomplishments, and we are confident she will bring advances to the operations at Marshall.”

Ms. Vanhooser began her NASA career at MSFC in 1980 as an engineer in the Ground Systems Analysis Branch, where she was responsible for defining and developing requirements for integration and testing of payloads for the Spacelab carrier.

She earned a bachelor’s degree in industrial engineering from Tennessee Technological University in 1980, and a master’s degree in administrative science from the University of Alabama in Huntsville in 1986.

She has received numerous awards, including a NASA Outstanding Leadership Medal, a Meritorious Presidential Rank Award, a NASA Exceptional Achievement Medal, and a Silver Snoopy Award.