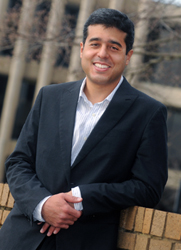 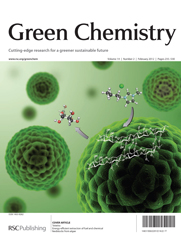 HUNTSVILLE, Ala. (March 13, 2012) – Dr. Rodrigo E. Teixeira of the College of Engineering at The University of Alabama in Huntsville was recently featured on the cover of Green Chemistry for his publication reporting the discovery of a new way to extract fuel from algae.

Green Chemistry is a prominent journal in the field of environmentally friendly chemistry. The tiny microorganisms have a tremendous, game-changing potential, according to algae experts, said Teixeira.

Algae capture sunlight to make fuels that can be used to power cars, planes and everything else, he said. The U.S. has enough land to grow a very large amount of algae; enough, in fact, to make a sizeable dent in petroleum imports. “What is more, to produce fuel algae sucks up carbon dioxide gas, a greenhouse gas,” he said. “So, if you use algae fuel, you would be doing the planet a whole lot of good.”

Unfortunately, algae are also very tough, so extracting its fuel takes too much effort and is too expensive, according to Teixeira. However, he has discovered an entirely new approach for extracting fuel from algae — one that requires very little effort. “In the past, we have seen all sorts of interesting algae technologies that never leave the lab because they are not very practical,” he said. “This one is surprisingly simple and straightforward, so it has the right ingredients to become practical, cheap and perhaps one day compete directly with petroleum,” Dr. Teixeira said. “I am working hard on taking this to the next level.”