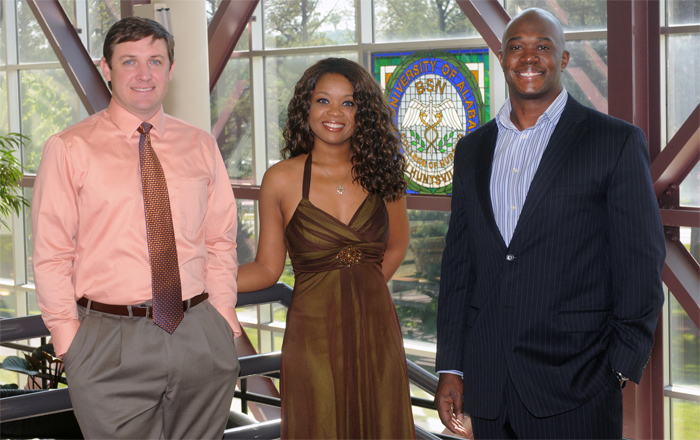 HUNTSVILLE, Ala.(April 30, 2012) —Swift.Silent.Deadly. The insignia nickname identifies the Second Reconnaissance Battalion of the United States Marine Corps. And, it is also how ex-Marine and University of Alabama in Huntsville (UAH) College of Nursing senior student James Dorsey lived his life as a juvenile gang-banger subsisting in Chicago's worst housing project, Cabrini Green.

Captain and instructor pilot Aaron Ludwick has clocked in more than 4,000 hours flight time and 1,000 combat hours during his years in the U.S. Air Force. The College of Nursing senior flew the C-17 from January 2001 until May 2009. He left the Air Force after 10 years because of the high deployment rates.

It took exactly one month for 17-year-old LaToya Patterson to make the decision to join the Air Force. The high school honors student wasn't ready for the freedom college life offered at such a young age. Realizing she was "burned out academically," and in need of a life plan, Patterson graduated from high school in May 1998. A few days later with her mother's signature of consent Patterson joined the Air Force. The E-5 staff sergeant classified, as microbiology supervisor, will one day be a physician, but for now her dream of becoming a nurse is almost complete.

Dorsey, Ludwick and Patterson will all graduate from UAH on May 5 with a Bachelor of Science degree in nursing. All three have very personal reasons for choosing nursing as a career path.

The field of nursing is a second-generation career for Ludwick. "Nursing was a second career choice for my father as well. I chose nursing because I was interested in a medical profession, and it is one that would allow me to spend more time at home. I made the decision in the fall of 2009 to attend the university, after my wife and I moved to Alabama. The proximity of the university, and an available opening in the BSN program were keys to selecting UAH."

Ludwick, a native of Sterling, Kan., met his wife at Incirlik Air Base in Turkey six years ago, where he was temporarily deployed from McCord Air Base in Seattle, Wash. They married in 2009, and moved to Huntsville because she was hired as an aerospace engineer at Redstone Arsenal. "The transition from military life to civilian life is welcoming. Our high deployment rates in the Air Force were very stressful, and moving from that lifestyle to nursing has allowed me to enjoy a home life."

When it came to education, Patterson's mother demanded excellence. "My sisters and I were the only people in our family to pursue a college education." While she loved the Air Force, Patterson did not re-enlist after her six-year obligation ended because she was eager to spend more time with her husband and children and pursue her education. Before she began attending UAH, the Anniston native worked for two years as a manager for a large blood banking company in Birmingham and attended the University of Alabama at Birmingham (UAB).

As Patterson was completing her academic prerequisites at UAB, her grandmother was diagnosed with end stage ovarian cancer. While it is her goal to be a doctor, Patterson was advised early on to obtain an undergraduate degree first. Not just any degree, but a profession she could "fall back on," with job security. "I knew my calling. I applied to the UAH College of Nursing and was accepted. I love Huntsville… it has a small town feel but big town opportunities. I chose UAH due to the college's outstanding reputation of academic excellence."

At an age when most boys are mastering video games and obsessing about sports heroes, James Dorsey was forced to join the Vice Lords, a tough Chicago street gang. Dorsey, whose parents had separated, was forced to live in abandoned buildings at night, and begged during the day. "I had to hold my own for one year, but when I was accepted, I was the most ambitious gang banger you ever wanted to meet — ultimately reaching the level of 3-Star Universal Elite. I remember doing the most heinous things and then, secretly crying myself to sleep at night because heinous was not in my nature."

In the early 1990s, he moved south to Alabama and rejoined his family, who had managed to form a tenuous union. Although Dorsey wasn't a model student, he met his future wife, Anouska Hassen('08 BSN)and graduated from Butler High School. Dorsey joined the Marines in 1994, becoming part of the Second Reconnaissance Battalion located in Camp Lejeune in North Carolina. He ended his military enlistment as a corporal (E-4). In 2008, Dorsey's father was diagnosed with terminal lung cancer. During his father's hospitalization Dorsey saw firsthand how his wife and her fellow nurses cared for patients with compassion. "I fell in love with nursing."

"All three have a common characteristic we see in all of our military students," said Marta Browning, clinical associate professor in the College of Nursing. "They are highly disciplined leaders…. their personal discipline brings focus to everything they do. They are also comfortable working in teams and using teamwork to get a job done. They promote teamwork among their classmates and provide support to members of their class who need assistance.

"James has a drive to make life better for anyone he encounters and is especially interested in the development of young people. He served as co-chair of the 2012 Let's Pretend Hospital(LPH) and was able to keep his classmates, who served as LPH staff, focused on the "mission" service to children to reduce their fear of hospitals and health care providers. He transferred his Marine Corps skills to leadership by example," Browning said.

"Aaron's career as an Air Force pilot is evident in his calm and focused manner," Browning noted. "His classmates say you will never see Aaron visibly upset and his calmness helps them focus under stress. He served as the incident commander for the spring 2012 community health disaster simulation, and hetransferred his military skill training to a student staff of 25 to successfully manage over 130 victims in two hours in an almost flawless manner.

"LaToya is quietly efficient. Work gets done without fanfare or noise, just with competent efficiency. She stepped up to a leadership role in the 2012 Let's Pretend Hospital developing and implementing evaluation of the delivery of services to our young six-year-old-clients," Browning said.

"The top-notch instructors at UAH's College of Nursing have done an excellent job preparing me for a nursing career," said Ludwick. "They made it challenging while pushing our class to learn as much as possible….we were exposed to a wide variety of nursing opportunities. The transition from school to a full-time job does not seem like it will be a huge shock."

An industrious student, who by her own admission "stays out of sight," Patterson believes UAH has prepared her for the nursing profession as much as possible in a learning environment. "Most of the things we need to know as nurses will come from hands on everyday experiences." Patterson said all her nursing professors were wonderful and extremely helpful. She credits a few of her teachers as going "above and beyond" at all times. "They were honest, available and genuinely wanted to see you succeed."

Patterson and her husband have been married for 13 years and have two children, a 12-year-old daughter, and a nine-year-old son. Patterson said her children are her inspiration for never giving up. Her ultimate career goal is to be a pediatrician.

"It was very difficult to balance my personal life and academic life," said Dorsey. "My wife is a nurse and because she understood all I had to go through, she was a great support. The UAH College of Nursing did a fantastic job of preparing my wife for nursing, and I had no doubt the university would prepare me for my future nursing profession."

**EDITOR'S NOTE:UAH will host spring 2012 commencement on Saturday, May 5 at 10 a.m. at the Von Braun Center Propst Arena. Peter Ammon, Ambassador of the Federal Republic of Germany to the United States, will deliver the commencement address. During the ceremony, about 872 degrees will be conferred. UAH will award 667 undergraduate degrees, 181 master's degrees, and 24 doctoral (PhD/DNP) degrees.