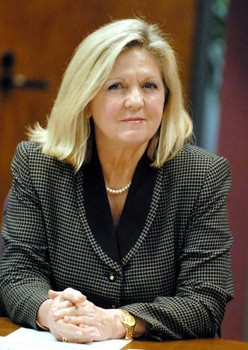 HUNTSVILLE, Ala. — Deborah Barnhart, a University of Alabama in Huntsville alumna (English ’75) and CEO of the U.S. Space and Rocket Center, was recently named to the Alabama Spaceport Authority Advisory Task Force by Alabama Governor Robert Bentley.

Barnhart is a Huntsville native and graduate of S.R. Butler High School. She was named CEO of the U.S. Space and Rocket Center in December 2010. Barnhart was previously employed as a vice president for three major corporations, including Honeywell, and United Technologies Hamilton Standard Space Systems International, Inc. She also served as a senior manager of government and media relations for McDonnell Douglas Aerospace.

Barnhart joined the U.S. Navy and rose to the rank of captain. She earned a bachelor’s degree in English from UAHuntsville, an MBA from the Massachusetts Institute of Technology and a Ph.D. in education from Vanderbilt University.

Legislators from the Alabama Senate and House of Representatives met in Montgomery last April to announce they would introduce joint resolutions to set up a panel to explore the possibility of bringing commercial spaceflight to the state.

A tentative start-up date of 2018 is possible, if the study is favorable and the Alabama Legislature secures money for infrastructure development.