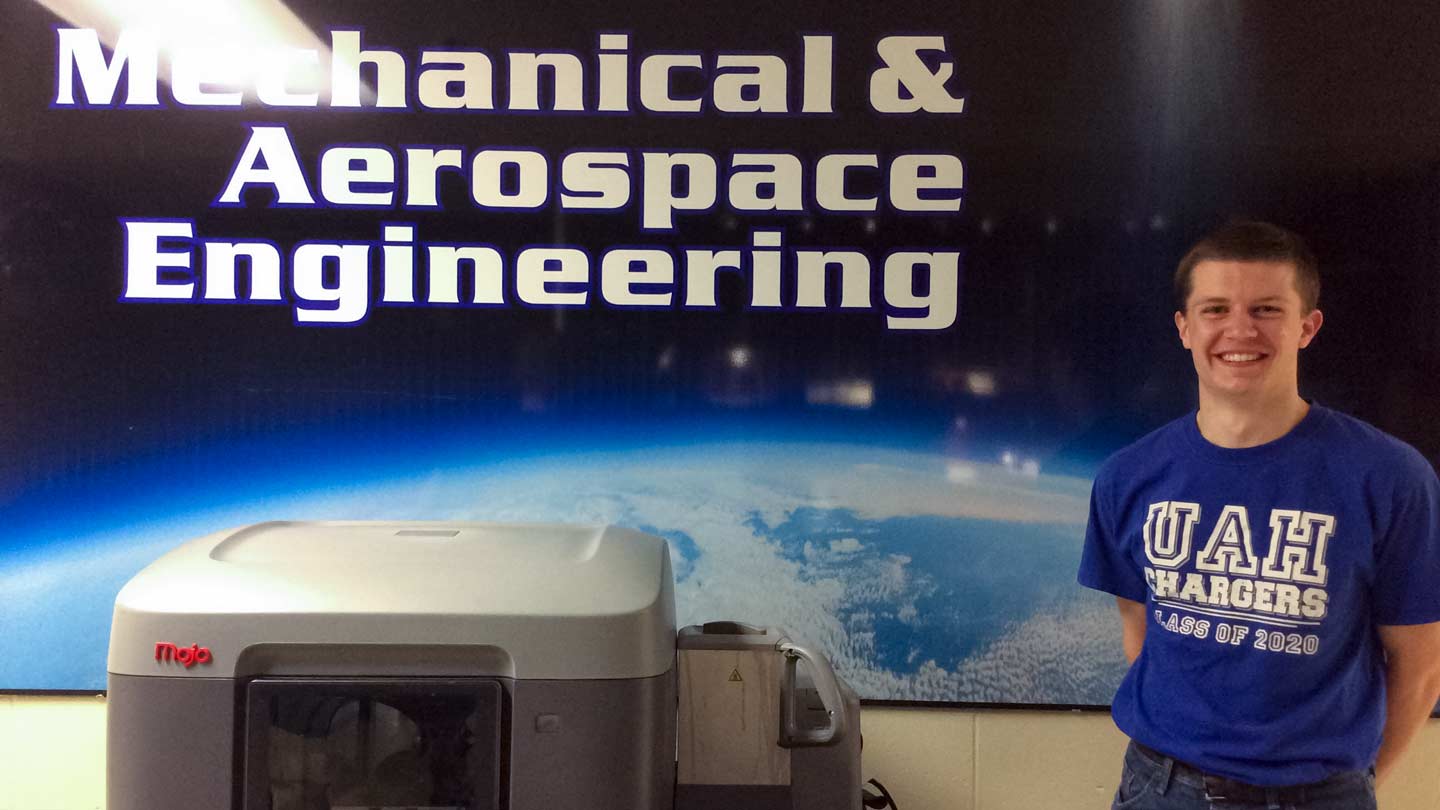 "It was just a little LEGO block – but it revealed to me that anything I could CAD I could print. I quickly realized that 3D printing could turn my imagination into reality and I have been avidly printing since then," said Salverson, a student at The University of Alabama in Huntsville (UAH) College of Engineering (COE).

"The wrench operates just like a normal ratchet, but instead of needing a unique socket for each desired bolt size, the wrench has an adjustable head that allows it to fit a wide range of bolt sizes," explained Salverson. "In addition to the scholarship, UAH gets a limited time 3D printer. I am very excited and honored to take first place in this challenge."

Salverson, is a native of Gretna, NE, located near larger cities Omaha and Lincoln. The oldest of three siblings, he was homeschooled full-time until sixth grade. He started public school on a part-time basis to participate in band and shop classes. Salverson accelerated the transition to college while in high school, by completing several dual enrollment classes such as physics and calculus.

He learned about UAH by watching the cable television show "Rocket City Rednecks."

"When the show proclaimed Huntsville as the Rocket City, I was immediately interested in pursuing a degree in aerospace engineering at UAH," said Salverson. "It only made sense to check out the ‘Rocket City.’

"I also chose to attend UAH for the abundant number of aerospace industries located in the area – which would provide internship and job potential. The UAH scholarships also really helped make my decision easier," he added.

In addition, this spring Salverson was the recipient of a $1,500 scholarship by the Huntsville Association of Small Businesses in Advanced Technology.

Because Salverson entered UAH with college credit he was able to "jump right into" his engineering course work. "What surprised me most about the UAH COE is how many faculty worked in an aerospace industry prior to being a college professor…It’s neat, since my professors frequently reference their time in industry and how our coursework will correlate to our future careers."

"I have enjoyed getting to know Thomas and see him progress in his academic studies. He is an excellent scholar and already has a mature understanding of solving engineering problems and creating new designs," said Dr. D. Brian Landrum, Associate Chair, Associate Professor, UAH Mechanical and Aerospace Engineering Department. "Even more importantly, Thomas is personable, considerate of others, and a good teammate. We were very fortunate that this Nebraska boy heard about and chose UAH. I fully expect Thomas to attain even more success in his undergraduate program and, hopefully, in graduate school at UAH. He will surely be a productive contributor to the aerospace community," added Landrum.

Salverson graduates from UAH in spring 2020 with a Bachelor’s degree in Mechanical Engineering. By the time he receives his undergraduate degree from COE, he will have completed nearly half of his graduate degree in Aerospace Engineering. "I am hoping to stay an additional year at UAH and complete my masters degree through the Jump program."

Future plans for Salverson include finding an Aerospace internship for the summer of 2019.

Some of Salverson’s early projects are viewable online.

The home page also shows Salverson’s entries to the 2017 and 2018 Stratasys competitions.