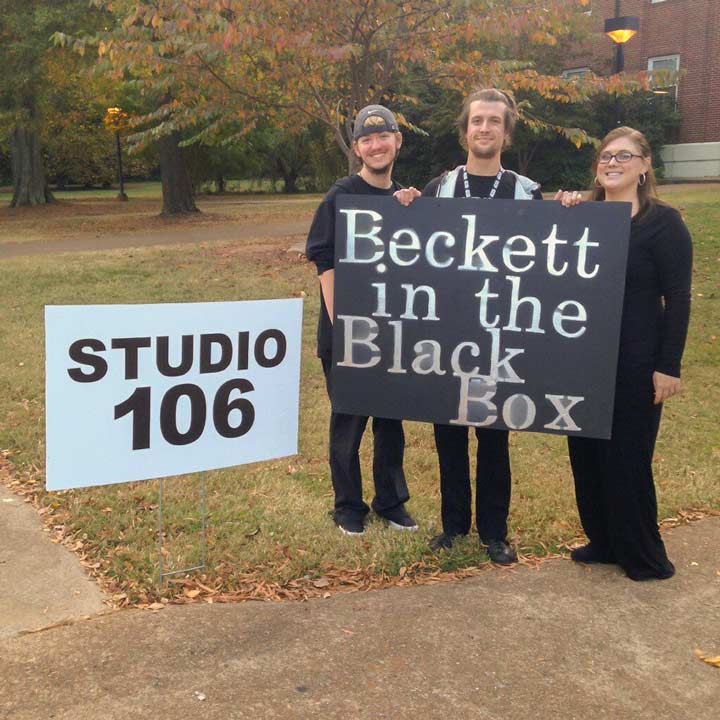 Shawn Murdock (center), a theatre and English double major, staged a production of “Beckett in the Black Box” along with fellow theatre students Logan Osborn (left) and Samantha Smith (right).

It will be a milestone moment this December when graduating senior Shawn Murdock becomes the first student to receive a bachelor's degree in theatre from The University of Alabama in Huntsville (UAH). But it's one that might not have happened for the theatre and English double major had he not taken a theatre appreciation class his first semester. "I loved it so much that I decided to add a theatre minor," he says. That soon led to roles in UAH Theatre's "Hitchhiker's Guide to the Galaxy" and "Becky Shaw" - and in what finally sealed the deal for Murdock to upgrade the minor to a major - the opportunity to direct his own production of "Beckett in the Black Box" this fall.

A self-described "military brat," Murdock has long fostered his creative side. "It's always been what drives me," he says. Before enrolling in UAH, he spent six years traveling around the country with his band, playing bass, ukulele, and banjo. And once he got to UAH, he hoped that majoring in English would allow him to continue his artistic pursuits. Instead, he says, it ended up being "more reading than writing" than he was hoping for. So he turned to theatre as a way to express himself, acting in the aforementioned shows and serving as assistant director of "Picasso at the Lapin Agile."

It was while working on "Picasso" that he starting thinking about the possibility of one day doing his own show. "I got to see what Dr. Chad Thomas did as director," says Murdock, "And I found it all very interesting." He approached David Harwell, UAH Theatre's founder and director, to find out what it would take for him to become a director. "He said that, if I added theatre as my second major, I could direct my own show as my senior capstone project," says Murdock. And so without hesitation, he signed on, and along with fellow theatre majors Logan Osborn and Samantha Smith, the idea for presenting a play began to take shape.

I’ve always just put everything into making art. So no matter what I do, I’m going to make art.

Initially, Murdock thought about staging one of Tennessee William's one-act plays before deciding on absurdist playwright Samuel Beckett. "I had known about Beckett for a couple of years, but I'd only read 'Waiting for Godot'," he says. "So I talked to Dr. Thomas, who gave me a book of short Becket plays." The result was "Beckett in the Black Box," a three-act interpretation that was completely conceptualized, produced, and directed by students - another first for UAH. With Harwell and Dr. Thomas on hand for consultation, the production proved a success, and the reaction so overwhelmingly positive that an encore performance was held the following weekend.

"It was a crash course in all the great classes I can't take because I'm graduating, but I learned to use all kinds of tools and exactly what it takes to put on a show," says Murdock of the experience. "I also learned to love the technical aspect, which I didn't think I would, but it was fun and powerful!" He is quick, however, to share the credit with his co-producers, without whom the show could not have been staged. "Samantha was the production manager, and she would go around a talk to people because I ramble and am scatter brained," he laughs. "And Logan was the stage manager, and he would yell at the actors so I didn't have to! He's really assertive."

The three have even talked about starting their own theatre troupe in the wake of the show's warm reception. "We saw the response to this project and how much everyone enjoyed it, and it's given us confidence that maybe we can pursue this," says Murdock. Should that not work out, he's also considering earning a master of fine arts in either directing or creative writing. One thing is for certain, however. Whatever project Murdock takes on, he will use all of his creative energy in bringing it to life. "I've always just put everything into making art," he says. "So no matter what I do, I'm going to make art."