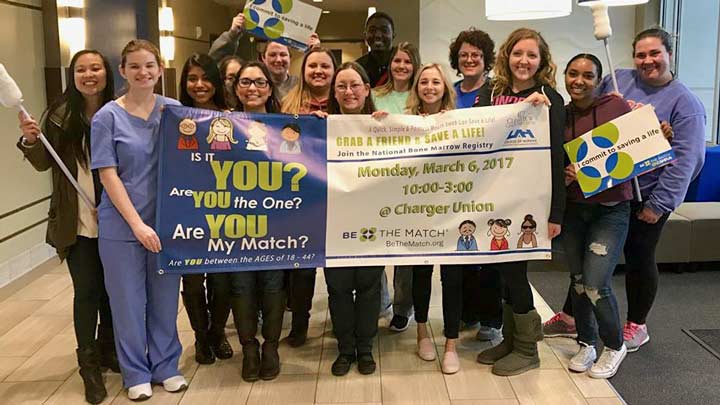 UAH Association of Nursing Students participate in the 2017 "Be The Match" bone marrow drive.

The University of Alabama in Huntsville (UAH) chapter of Association of Nursing Students recently attended the 2017 State Conference in Hoover, AL, and brought home a number of awards.

Several UAH nursing students attended the convention, which attracted hundreds of student leaders from across the state for professional development sessions, workshops, networking and poster presentations.

"Being a member of your pre-professional nursing association is a privilege and honor because its focus is centered on the professional and personal development of each nursing student member. I am particularly pleased with how successful our Association of Nursing Students (ANS) has been. The members are strong student leaders that I expect will transition into the professional nursing leaders of the future," said Dr. Marsha Howell Adams, Dean of the College of Nursing.

"We are very proud of the UAH ANS board. They understand how important it is to collaborate with other students and faculty not only at our school but all over the country. Our students are very active in our local chapter benefiting our school and community and they have reached out across the country to bring back ideas to advance our local chapter even further," said Tracy Thornton RN, MSN, ACNS-BC Assistant Clinical Professor of Nursing and ANS Faculty Advisor. "The College of Nursing had three students serving on the executive board on the state level for 2016-2017, and for 2017-2018 there are four students. This is the first time UAH has had nursing students on the local, state, and national boards. We have been very fortunate to have students that are willing to be a part of this influential, professional organization."