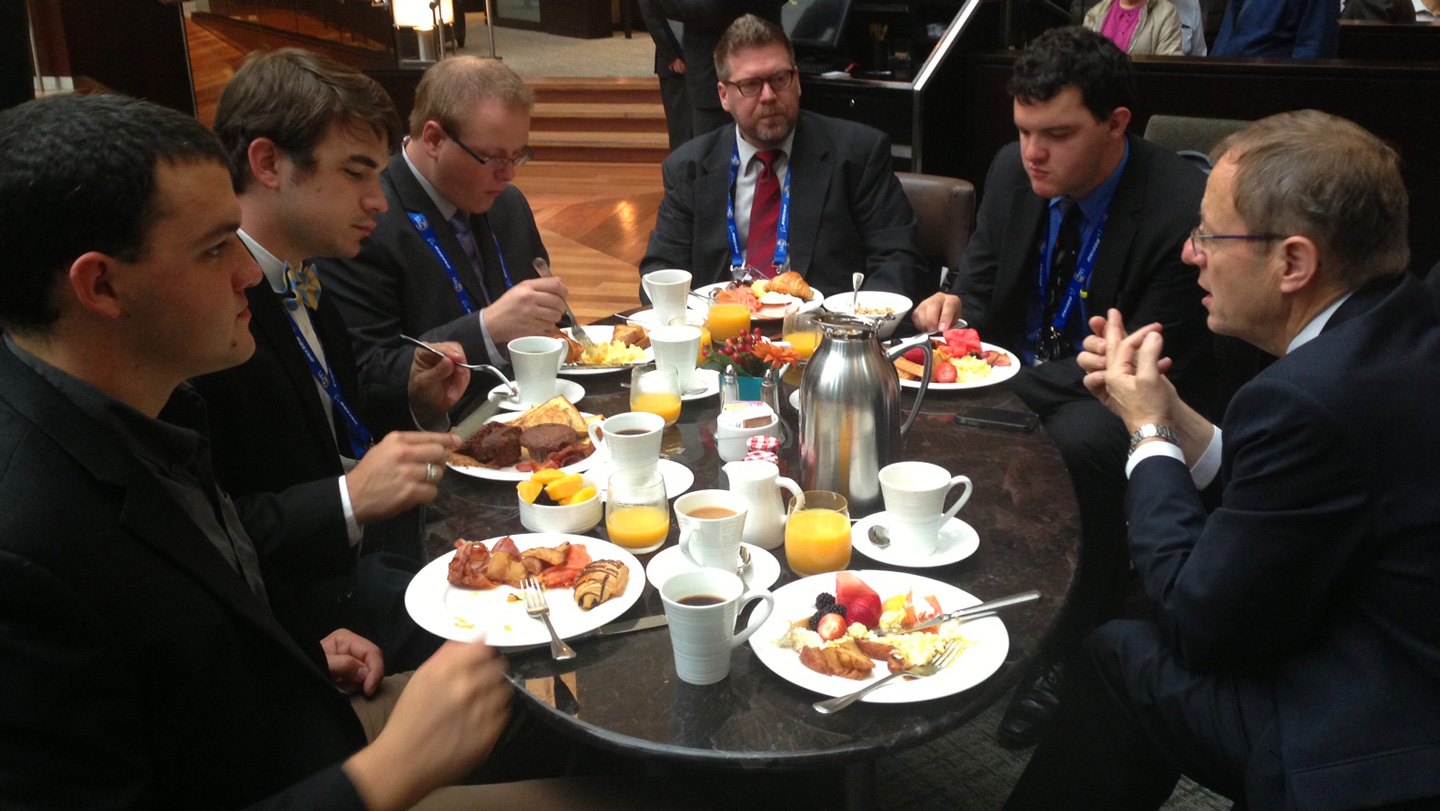 Four students from The University of Alabama in Huntsville (UAH) presented their research in the regular congress of the 65th International Astronautical Congress (IAC) in Toronto, Canada, from Sept. 29 to Oct. 3.

UAH is a full member of the International Astronautical Federation (IAF), the parent organization that puts on the yearly space meeting.

"This meeting is the single biggest international gathering of all the major players in the aerospace industry," says Dave Cook, coordinator of student research programs for UAH's Office of Academic Affairs. The IAC attracts professional researchers, top academicians, senior leaders in government and private industry, and the heads of the world's space agencies. Students even got to rub elbows at the conference with retired Canadian astronaut Col. Chris Hadfield, who was the first Canadian to walk in space.

The students also met with world leaders including Prof. Jan Wörner, head of the German Space Agency and Prof. Volker Gass, director of the Swiss Space Center, in addition to networking with aerospace industry engineers, scientists and entrepreneurs from around the world.

Two UAH attendees, John Alcorn, a senior double-majoring in mechanical and aerospace engineering and mathematical sciences, and Marc Becnel, a graduate student in his last semester of his master's degree in aerospace engineering, were attending their fourth IAC meeting. They also presented at the 2013 conference in Beijing, the 2012 conference in Italy, and the one held in South Africa in 2011.

Markus Murdy and Andy Machemer, both seniors in aerospace engineering, rounded out the student presenters. "While it was the first IAC for both of them, both students brought a lot of research experience to their work and gave flawless presentations in front of peers in their field," Cook says.

UAH students have had a strong presence at the IAC meetings as presenters in the regular congress since the 2010 gathering in Prague, rather than as members of the student congress. That's an important distinction, says Cook.

"This means the students have cleared the high bar set by the congress organizer, the IAF, and are presenting shoulder to shoulder with the top experts in their respective fields," he says.

Other papers given by UAH included:

More than 3,400 participants from around the world attended the congress, including over 600 students and 400 young professionals. UAH alumni Eric Becnel and Emma Hambloch, who presented at the IAC as students in previous years, were also in attendance. "It's nice to see that as our graduates enter the workplace, they've learned the value of attending the IAC for its vast network of professionals in all areas of aerospace," Cook says.

"Our students have really represented our institution well, and UAH is well-known among congress goers thanks to their hard work," says Cook. "The students get the opportunity of a lifetime - which they've worked very hard for - and UAH continues to build its reputation of being one of the top educational institutions in the world."