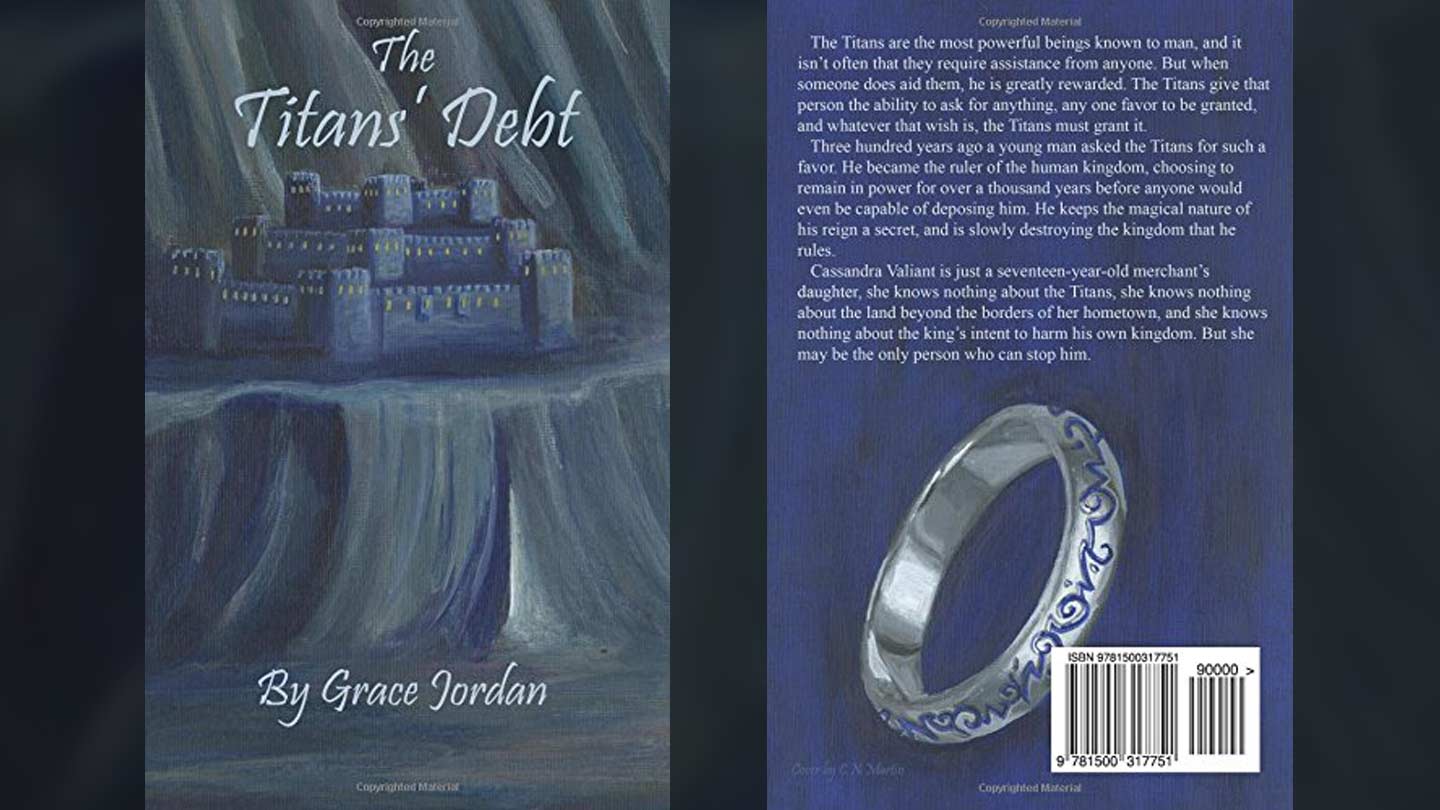 HUNTSVILLE, Ala. (August 19, 2014) - Write and edit her own book. That mandate has held the top spot on Grace Jordan's bucket list since she was 7 years old. But now the sophomore and business management major at The University of Alabama in Huntsville (UAH) can finally check it off, thanks to the debut of her brand-new novel, The Titans' Debt.

As with any writing project, Jordan's biggest challenge was figuring out the plot. "I realized that in the past I never planned anything out, so I would start and then fizzle out," she says. So this time, she looked to other books she'd read and enjoyed to flesh out her 'girl on a quest' storyline. "They're just about people going on a journey, but that takes up a whole book," she points out. "It doesn't just say, 'They left and they got there.'"

Next up was creating characters, starting with her main character, Cassandra Valiant. The name came to Jordan a while back, but she confesses that naming characters in general isn't one of her strengths. "They're really hard because you have to live with them forever," she says. "And you don't want to be too uncreative or too creative with names people can't pronounce."

Originally, she planned to make Cassandra unsympathetic and then change for the better as the book went along. But as she wrote, she reconsidered. "I realized this was not going to work if she's not likeable at the beginning - it's not going to be pleasant to read," she says. "So she ended up being nice all the way through."

And that wasn't the only unexpected revision. Although Jordan had planned many aspects of the story in advance, she had to work out some of the plot on the fly. "There were a lot of things that changed as I went along because I was like I'll figure it out when I get there," she says. "And then I didn't figure it out! So I needed to anticipate those gray areas a little more."

I’m already feeling like I should write another because at least one person other than my family liked it.

Fortunately, she'd chosen a genre - fantasy - that lent itself to artistic freedom. "It's my favorite because you don't have to really know how things work," she says. "I don't know how long it takes people to get from here to D.C., for example. But in my fantasy world, it takes as long as it does because I say so!"

Four long years later, Jordan finally had the bulk of her book complete. And in the three weeks following the end of this spring semester, she was able to wrap it up. "I was on a deadline because I had summer classes coming up, so I wanted to finish it before then," she says. And when she did, "it was anticlimactic," she laughs. "It was two in the morning and everyone was asleep!"

Still, she was pleased with the final product and knew that even if she hadn't given herself a deadline, she would have considered the book complete by that time. "After a while you get sick of looking at it," she says. "But if I changed anything else, it wouldn't feel like my book anymore." It was time, in other words, to look for a publisher.

Jordan had two options - publish through an agency or self-publish. She opted for the latter. "You can send your manuscript to an agent, and it can sit there for six months and they can say no," she says. "So I chose CreateSpace, which is affiliated with Amazon." A few weeks later, the book was online and ready for purchase in hardcopy or Kindle format, with CreateSpace and Jordan sharing the proceeds of its sale.

Not that she is expecting to get rich off The Titans' Debt - or become a full-time novelist, though she will say a sequel may be in her future. "I'm already feeling like I should write another because at least one person other than my family liked it," she laughs. "And it is meant to be part of a series. But with college and everything else, I'm not promising there will be more books!"

Even if there aren't, that's fine too. She's already managed to do something pretty remarkable for someone so young. "My parents like to inform me that it's not often people set a goal and actually achieve it," says Jordan. "But it's honestly not about making anybody proud of me. I just wanted to take a stab at doing something I love while I've got the time." After all, she's got plenty more items to check off on her bucket list.