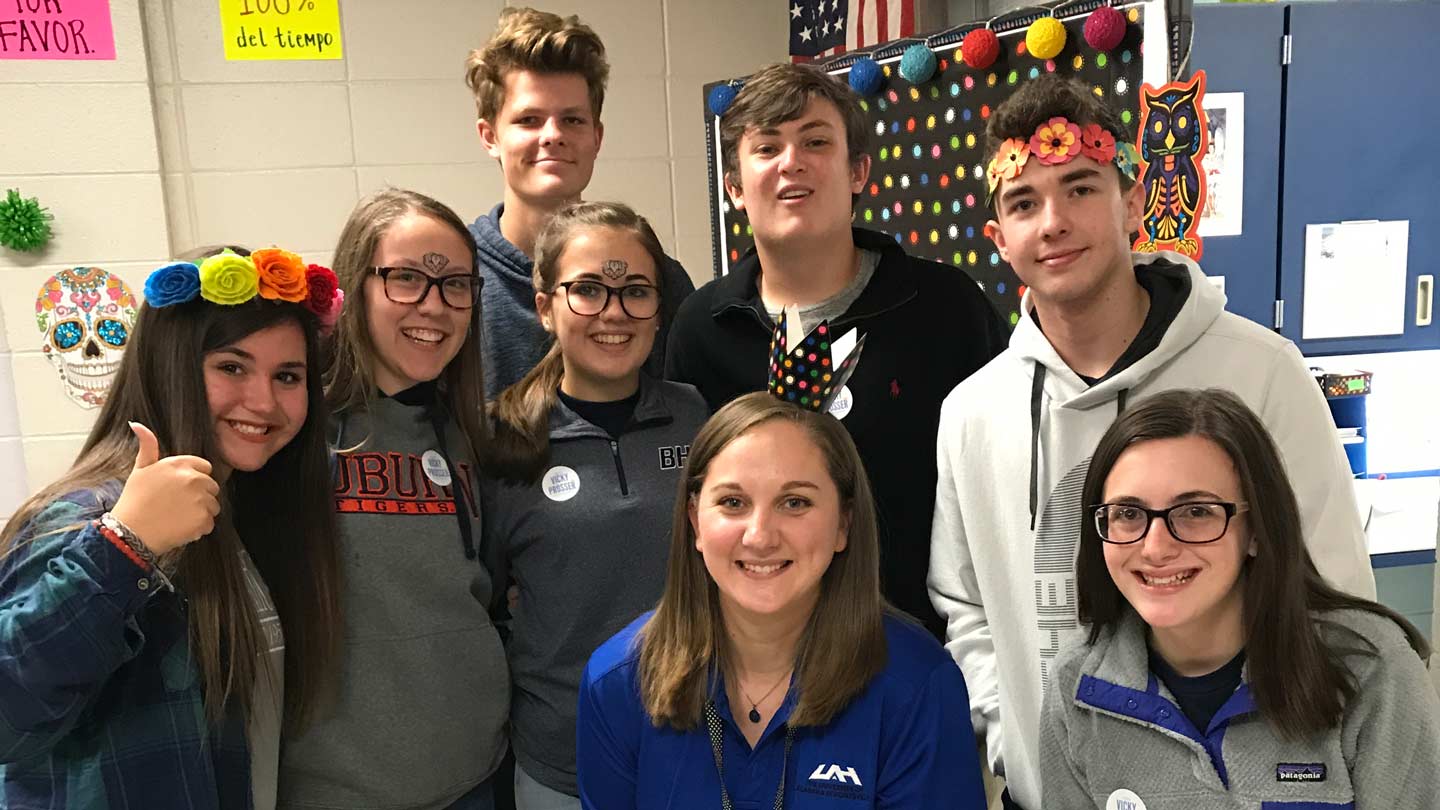 "Earning two Bachelor's degrees at the same time will set me up for success, no matter which path I take in life," said Victoria "Vicky" Prosser, graduating senior at The University of Alabama in Huntsville (UAH).

Prosser’s list of professional and academic achievements and awards are impressive, but she is the first to admit that life for her has been "difficult" for many reasons.

She began attending UAH in fall 2016. Prosser was also recovering from a recent reconstructive hip surgery. "I was still dealing with the sting of being medically separated from the Army, and I was attempting college for the second time — this time as a SOTA (student over the traditional age)." 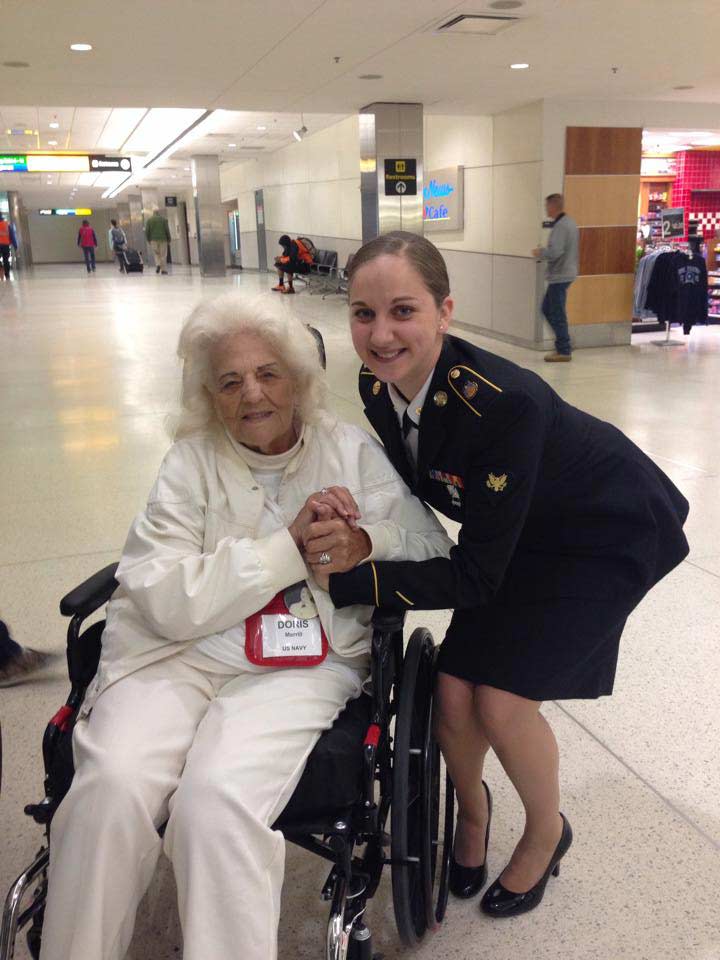 Prosser attempted college at Georgia Tech (GT) as a traditional student more than 10 years ago, it was a less than stellar performance.

"I entered GT with a full-ride scholarship based on merit. High school had been a mostly coasting experience. I gave minimal effort and was rewarded with excellent grades and accolades. I took for granted the opportunities that I had been given and finished my first undergraduate semester with a 1.07 grade point average (GPA).

Although she slightly recovered her GPA, all scholarships were rescinded. "Paying for an undergraduate degree in International Affairs and World Language on my own was not an option."

In May 2009, she joined the U.S. Army as a linguist. "The Army gave me structure and direction, with no real option to fail or not take things seriously. I excelled and matured immensely." The Army sent Prosser to the Defense Language Institute (DLI) where she studied Serbo-Croatian for a year.

"Unfortunately, I was injured during training and was removed from the program. I had two hip surgeries to repair the damage. After my recovery had progressed far enough for me to return to training, the Army reassigned me to learn Spanish," she said.

As the child of Cuban immigrants, Prosser was already proficient in Spanish. However, she had never received a formal education in the language.

"The Spanish program at DLI provided me an incredible opportunity to learn the theory behind the language I already spoke and prepared me for my future in Spanish education. Once I graduated from DLI, I was stationed at Fort Meade, MD, where I worked as a Spanish linguist and analyst for the National Security Agency."

In 2015, Prosser had two more surgeries due to continued hip problems. "The Army decided it was best for me to be medically retired. I had one final surgery in April 2016," she added.

Prosser left the Army and she and her husband moved to Huntsville, where he received military orders stationing him at Redstone Arsenal.

It was during her first UAH advising meeting that Prosser learned the coursework difference between earning one or two degrees was about a semester's worth of classes.

"My academic experience at the university has certainly been accelerated," she said. "With the exception of my first semester (15 hours), I have taken at least 19 hours of course credit every semester, including summer terms." 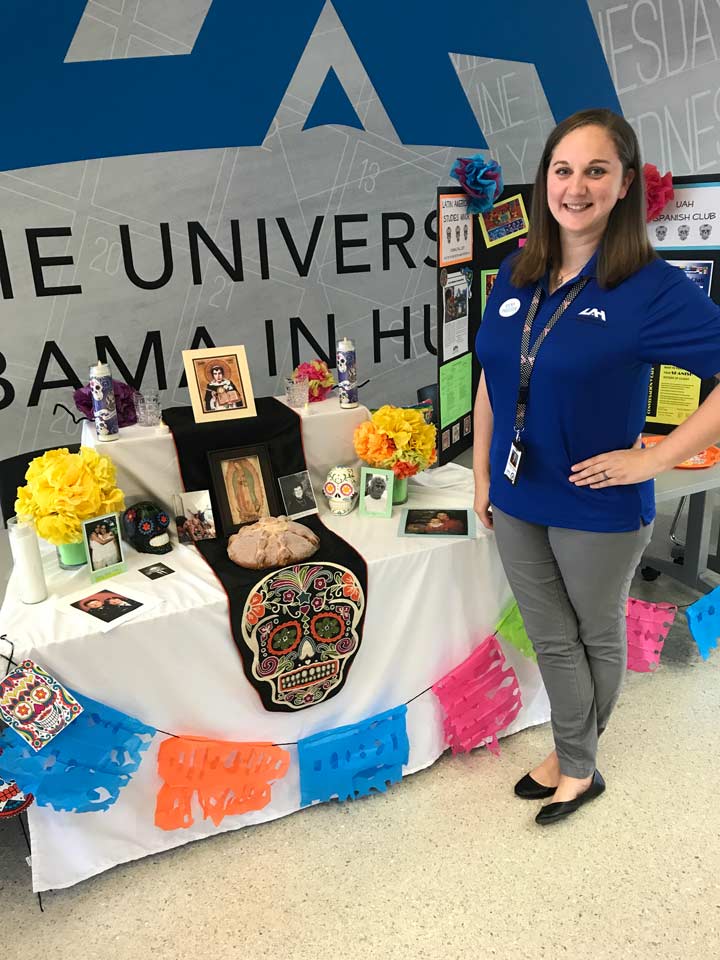 Prosser said two faculty members "stand out" throughout her time at UAH.

"Dr. Leslie Kaiura, in the Department of World Languages and Culture. Her classes are rigorous and she has high expectations for her students. The Spanish courses with Dr. Kaiura have prepared me immensely for graduate studies in Spanish, and I am eternally grateful for her mentorship and guidance throughout my time at UAH," said Prosser.

"Dr. Jason O'Brien, in the Department of Curriculum and Instruction, has been my university supervisor throughout my student teaching internship. I have never had a teacher or faculty member who cares more for his students than Dr. O'Brien," Prosser said. "He is a true credit to and an invaluable member of the teaching profession. I hope to one day inspire students a fraction of how he has inspired me."

"Vicky is a gifted educator. When I observed her student teaching, she looked like a veteran teacher," said Dr. Jason L. O'Brien, Associate Professor of Education. "Vicky always conducts herself in a professional manner, and she is a tireless advocate for her students.

Recently, I asked her to help with a student who is in foster care because no one at the facility could speak Spanish fluently. Vicky came on two hours' notice and spent an hour talking with the student in Spanish, assuaging his fears," added O’Brien.

In addition to her studiousness, Prosser was heavily involved in student organizations.

For Prosser, there is no doubt the colleges of Art, Humanities and Social Sciences, and Education prepared her for a future career in Spanish and Education.

"I plan on pursuing employment in the secondary setting, specifically with high schools. During my student teaching time, I was able to experience both middle and high school placements and feel at home in a high school. I connect with the students and feel like I am having a real impact on their lives," she said.

Prosser will begin graduate studies at James Madison University (Harrisonburg, VA) this summer. The program leads to a M.Ed. with a concentration in Spanish Language and Culture for Educators degree, and a Salamanca Masters for Teachers of Spanish as a Foreign Language degree from University of Salamanca (Spain).