Early that morning, the UAH senior nursing student was seriously injured in a horrific car crash in Madison County. Christine was riding in the front passenger seat when the car's driver lost control, ran off the road and struck a utility pole. Miraculously she lived.

The severity of the whiplash caused Christine's neck to break in two places. The C6 and C7 bones in the spinal column, located at the base of her neck, where it intersects with the back and shoulders caused a spinal cord injury (SCI). Christine was also diagnosed with pneumonia and acute respiratory distress syndrome (ARDS) as a result of her injuries.

"I was placed on a ventilator because I couldn't breathe on my own," she said. "Doctors also put me in a medically induced coma and placed me in a rotating hospital bed. The bed rotated my body from the face up to face down positions in order to clear the fluid build-up from my lungs. The medical staff initially told my family I could be in the bed, for up to three months, but thankfully I only had to stay for 10 days," said Christine. 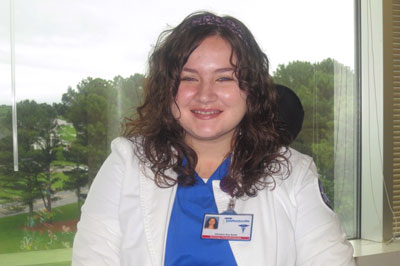 Less than a month later, she was transferred to a hospital in Birmingham, where she was taken off the ventilator and her tracheostomy tube was removed. From there, Christine was admitted to the University of Alabama at Birmingham Spain Rehabilitation Center, for inpatient therapy. "They began teaching me how to live with SCI …. working with me on strengthening my arms, and how to transfer to and from my chair. I returned home on March 23, 2012, and was very happy to finally be back."

Due to Christine's SCI injury, she has no movement or sensation from the chest down. She does have weak movement in her arms and fingers. "After my injury, I couldn't even lift my arms up to do my hair, but now my arms and hands are much stronger."

Christine faces many obstacles on a daily basis -some simple, others more complex. "Some of the challenges I face are accessibility, because many public places aren't designed for a wheelchair. Also, body image insecurities, because it's very frustrating not to physically look the same way, or be able to do all of the same things I did before the accident," she said. "And, I have to rely on my family for transportation until I can get a vehicle with hand controls."

Before the accident, Christine didn't miss a beat when it came to her education. While attending Buckhorn High School she completed dual enrollment pre-calculus, and advanced placement biology classes. "I decided to attend UAH because of its great nursing program, and I could save money staying at home. I was led to the nursing field because I enjoyed being a part of the Huntsville Youth Volunteer Leadership Corp in high school and wanted a career where I could help others. I began attending UAH in fall 2008."

After the accident, Christine realized her life had changed forever, and it was beginning to look like her beloved career choice as a nurse would be nothing more than a pipe dream. "I was supposed to graduate with the spring 2012 class. I was able to participate in the pinning ceremony with my classmates," she said. "They even dedicated "Lean On Me," the class song, to me.

"The summer after my accident Dr. Pam O'Neal (associate dean for undergraduate nursing programs), and Dr. Fay Raines (dean of the College of Nursing) came to my house with different options and encouraged me to finish my degree …. this has meant more to me than they will ever know. I didn't know if I would be able to until then. The nursing faculty and staff made sure I had all the tools that I would need to succeed, and for this I'm very thankful," said Christine.

Earlier this month during the College of Nursing's Annual Honors Convocation, Christine was awarded the Dean's Award for a senior "who exemplifies outstanding academic achievement and has exhibited leadership in university and community activities."

"Christine has been an inspiration to many of us. She has faced challenges in continuing her nursing education with a positive attitude and commitment to success. She is an excellent student and we are proud to have her as a graduate," said Dr. Fay Raines, dean of the College of Nursing.

Christine is realistic when it comes to seeking employment as a nurse. "I will be looked over for many jobs because I am unable to do some of the physical requirements that are expected of me, and many nursing positions require 12 hour shifts."

She has not concentrated on a nursing specialty. "For now, I would like to see what is available for a nurse in a wheelchair. I don't want to narrow my options when they are already limited. However, I'm thinking of case management, psychiatric, or community health nursing.

" I have received a wonderful education at UAH," Christine said. "The faculty and staff were supportive of me both before and after my accident. And, I do plan on returning to UAH for my master's degree in nursing."

It seems as one chapter closes in Christine's life, another one opens. Her family and friends are on a mission now to get Christine a hand-controlled van, so that she can drive herself around and be more independent.

May is National Mobility Awareness Month and Christine's dad, Scott Smith, wrote a letter on her behalf nominating Christine as a local hero and entrant for a van. Family and friends of Christine are allowed one vote per IP address a day. So, she can receive numerous votes each day until the deadline of midnight May 10, from anyone in the United States. Voting begins at 12 a.m., Pacific Time everyday. The National Mobility Awareness Partners (NMAP) sponsors the contest, and three winners will be announced on Friday, May 31.