The Personification of Engineering by Jacob Bryson.

Jacob Bryson, a senior at The University of Alabama in Huntsville (UAH), has always had a passion for engineering and its ability to improve the lives of everyday people. So when he learned about the National Association of Engineering (NAE) "Engineering for You" video contest, he figured it would be a good way to share that passion. Little did he know he'd end up placing first in the tertiary education category with his submission, The Personification of Engineering.

"A lot of people think engineers sit in a cubicle working on a computer all day, and I think Dilbert plays a role in that!" says Bryson, a Madison native and Madison Academy graduate. "But I view engineering as one of the greatest helping professions out there, so I wanted people to see my video as a conversation between engineers and the people they help."

When he heard about the contest from his sister, a UAH alumna now pursuing a master's degree in biotechnology engineering, Bryson's first thought was that he didn't have the time. He was already balancing a full course load as a double major in industrial systems and mechanical engineering. Not to mention, he had absolutely no experience making videos. "I did not even know that Adobe Premiere Pro existed!" he laughs.

What he did know, however, was that he was capable of confronting challenges head-on. It was a lesson he'd learned well the first semester of his freshman year at UAH. "In my introductory engineering class, they told us to build a car that would start and stop itself," says Bryson. "I had no idea how to do that, but that was the point. None of us knew how to do that!"

I view engineering as one of the greatest helping professions out there, so I wanted people to see my video as a conversation between engineers and the people they help.

Together they figured it out. And after clocking in long hours in the UAH machine shop, he says, "we built a fantastic little car." It was, in short, a crash course in experiential learning – one that dwarfed the relatively simple task of shooting and editing a video. For that, Bryson simply taught himself via online tutorials. It was coming up with the content that he says was "the greatest hurdle."

The NAE had provided some general guidance: the video would be required to showcase engineering achievements serving human welfare and the needs of society both in the past 50 years and going forward another 50. So Bryson started cobbling together "loose concepts" while researching those achievements, jotting notes in a notebook before finally hitting on the message he wanted to share with his video.

To convey the personification of engineering, he juxtaposed still images of engineering achievements and their impact on humanity with a narration by voices that correspond to the timeframe of those achievements. An older lady, for example, talks about how the invention of contact lenses has helped her see. As time progresses, future potential engineering achievements like curing cancer and repairing the ozone are narrated by much younger voices representing tomorrow's engineers.

"Each and every one of those voices is someone I know personally, either a family member or a friend. The first voice is my 97-year-old great-grandmother. And the last voice is my 5-year-old cousin," he says. "Each of the things shown in the video reflects a new engineering technological advancement, but it's presented in a way that reflects the impact of the achievement on real people instead of featuring the technology itself."

To take part in the contest, Bryson was required to complete an entry form and upload his video to YouTube. A panel of judges then determined the winners based on three main criteria: creativity in the content selection and presentation; anticipated breadth of public appeal and interest; and effectiveness in highlighting engineering achievements serving the advancement of human welfare and the needs of society in an engaging and entertaining way.

"When I found out I won, I was like, 'Wait, what?' Because I had gotten wrapped up in how much fun it was," he says. Bryson was in fact just one of five category winners among hundreds of submissions from across the globe. As for the overall winner, he says, "that group is a professional video production company, so I feel really proud of the fact that I held my own against filmmakers of international caliber!" 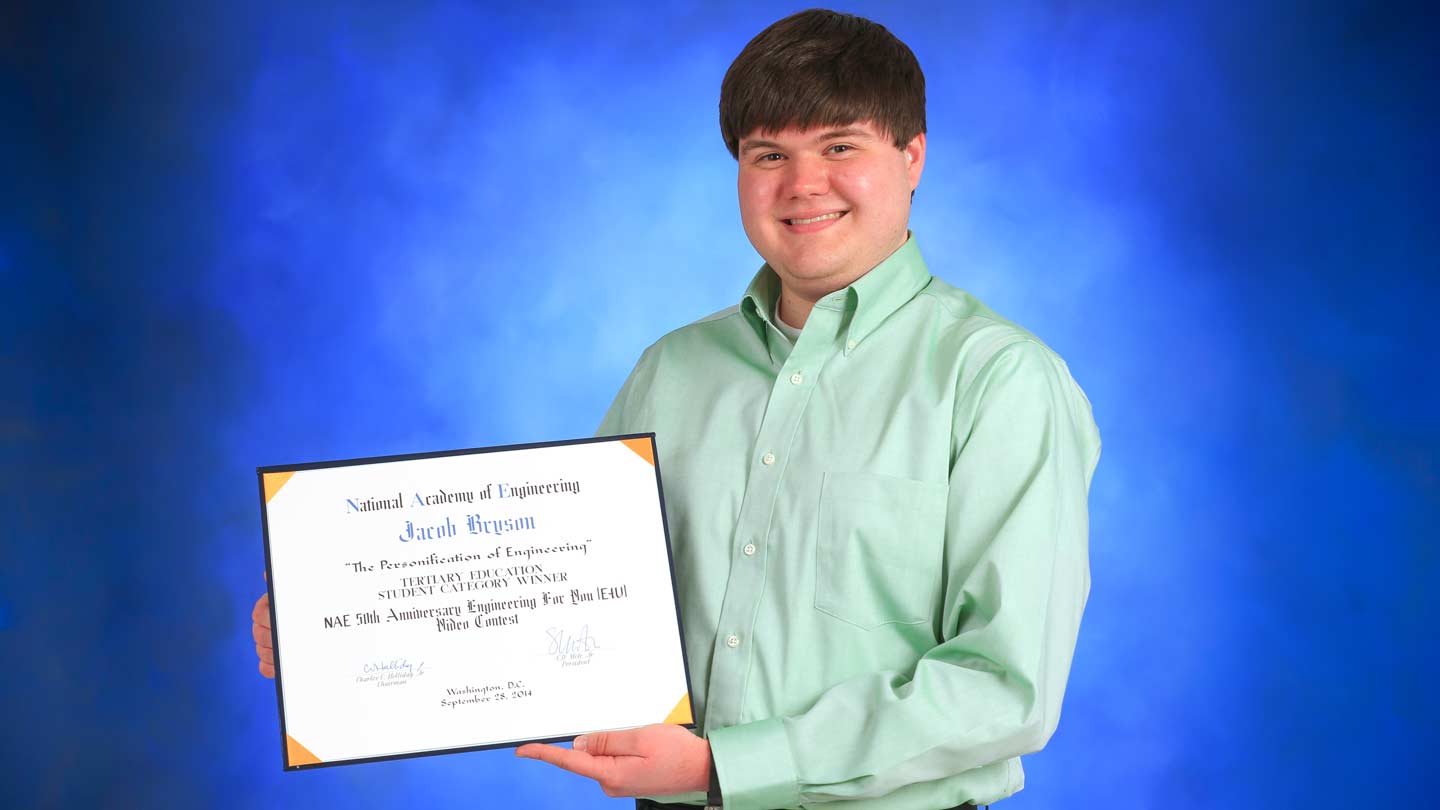 Along with a monetary prize of $5,000, Bryson received an all-expenses-paid trip to Washington, D.C., where he and his fellow winners were recognized with a formal ceremony at the NAE headquarters. They were also allowed to sit in on the day's sessions and watch as new members were welcomed to the association. It proved to be a watershed moment for the aspiring engineer.

"When I first started making the video, I went from being inspired by doing my research to resolving that I wanted to be an inspiration to others someday too, to show people that engineering is so much deeper and more meaningful than people think," he says. "But when they invited me to D.C. and included me in the Academy's meetings and presentations, I was inspired all over again. It was such a great experience to meet, hear, and learn from all these brilliant minds."

Just as moving was the heartfelt encouragement he received from the chair of the contest's judges committee – and Pixar emeritus executive – Rob Cook. "He talked about how important voice talent is to a company like Pixar and said that my work captured his heart within the first 20 seconds," he says. "That kind of comment is more lasting and more edifying than anything else I could have taken away from the experience."

That someone like Cook even took the time to engage, he continues, "speaks to how valuable it is for leaders in industry to reach out to young people and encourage them." And it's something Bryson plans to keep close to his heart going forward. "Being able to make even a brief impression on him has made a lasting impression on me," he says. "I know that I will be a greater risk-taker, reaching further, and challenging myself more and more because of the experience."

If so, it's not entirely impossible that Bryson will one day join the very ranks of the engineers depicted in his award-winning video. He's certainly keeping his eyes on the prize. "I want to be accomplished enough to be invited to be a member of the NAE," he says. "If I can make that happen, I'll be pretty content."