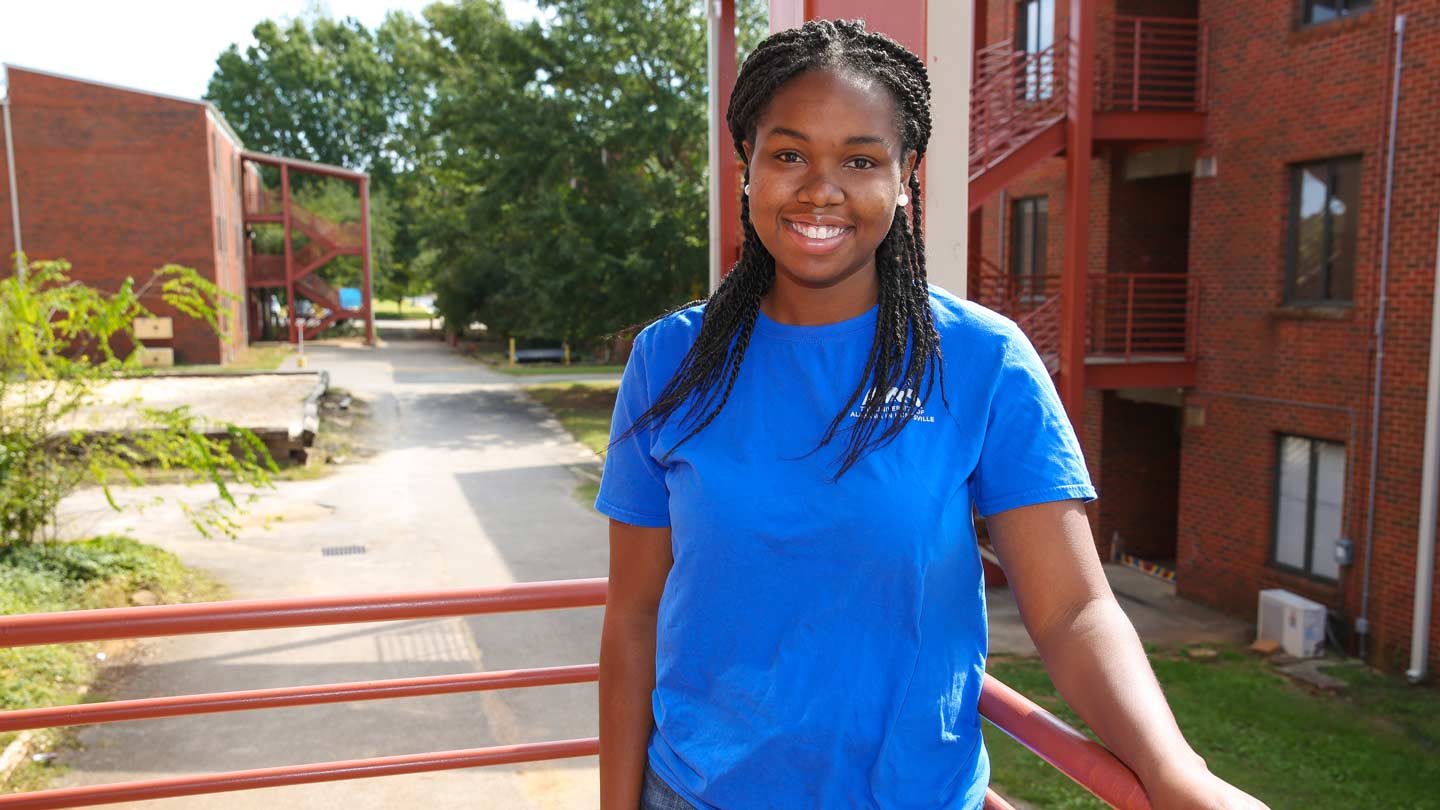 Accounting major Kadeidra Bowie is the president of UAH's Black Student Association and a participant in EMPIRE, a peer-mentoring program for African American and Hispanic students.

Offering support and encouragement to fellow students is something that Birmingham, Ala., native Kadeidra Bowie goes out of her way to do. The accounting major at The University of Alabama in Huntsville (UAH) first got involved with mentoring through the Black Student Association (BSA) on campus during her freshman year at UAH. The BSA is a student-run organization that assists new students with growth and development through a series of programs and discussions that are culturally, socially, and academically focused.

Bowie became aware of the BSA when she was invited to accompany several members on a trip to St. Louis, a city she had always wanted to visit. That soon led to more interactions with the group, which helped foster her own successful growth and development, as both a student and an all-around leader. "Being a part of the BSA has enabled me to contribute better to my school and has led to my involvement in other organizations," she says. Bowie eventually became vice president when she was a sophomore, then transitioned into the presidency her junior year.

One of her current responsibilities is planning activities and events designed to increase the BSA's visibility and allow more students to participate. "I'm always talking to people, reaching out to students to try and get them involved," says Bowie. The club recently hosted a Gospel Fest, featuring UAH's Anointed Voices, Baptist Campus Ministries, and Voices of Triumph Gospel Ministries from Oakwood University, and Bowie says she's always open to other ideas that will develop and promote unity within the minority community at UAH.

Being a part of the BSA has helped me contribute better to my school and has led to my involvement in other organizations.

Bowie serves her fellow students in other ways as well. She is a member of EMPIRE, a peer-mentoring program at UAH that provides on-on-one counseling and friendship for other first-year students of color. And she is a resident assistant (RA) for UAH's Housing and Residence Life. "The RAs try to build a sense of community among the students by having socials or mixers, or lifestyle-planning events where we offer advice that we think students can actually use," she says, adding that past topics have covered doing taxes, tire maintenance, and moving into a new apartment. Knowing that a strong support system is critical for student success, Bowie also plans "ice-breaker" events, where students and residents can get to know each other in a more relaxed setting.

In addition to fulfilling her many responsibilities, the accounting major also manages to find time to successfully maintain a challenging class schedule as well. As a senior, Bowie is taking advantage of UAH's Joint Undergraduate Master's Program (JUMP). JUMP allows undergraduate students take courses at the graduate level during their senior year, reducing both the cost of tuition and the amount of time it takes to get a master's degree.

Once she graduates, Bowie will have four class credits to apply to her MBA, which she plans to do at UAH as well. And while she isn't exactly sure where her MBA will take her, she's seriously considering a career in human resources, saying, "I think I'm more into recruiting and talent management."

She feels she's already learned so much from her involvement with the BSA and other clubs, in particular the kind of soft skills that will help smooth her transition into the professional workforce. "I've learned things such as advertising and time management, to just reaching out to students," she says, adding that "you can't be afraid to talk to people!" In the meantime, Bowie is immersed in making sure other students have a successful and satisfying college experience by putting those soft skills to work. "Students can come here and find a place to belong," she says. "By joining the BSA and other organizations like it, they can find encouragement, support, and friendship."