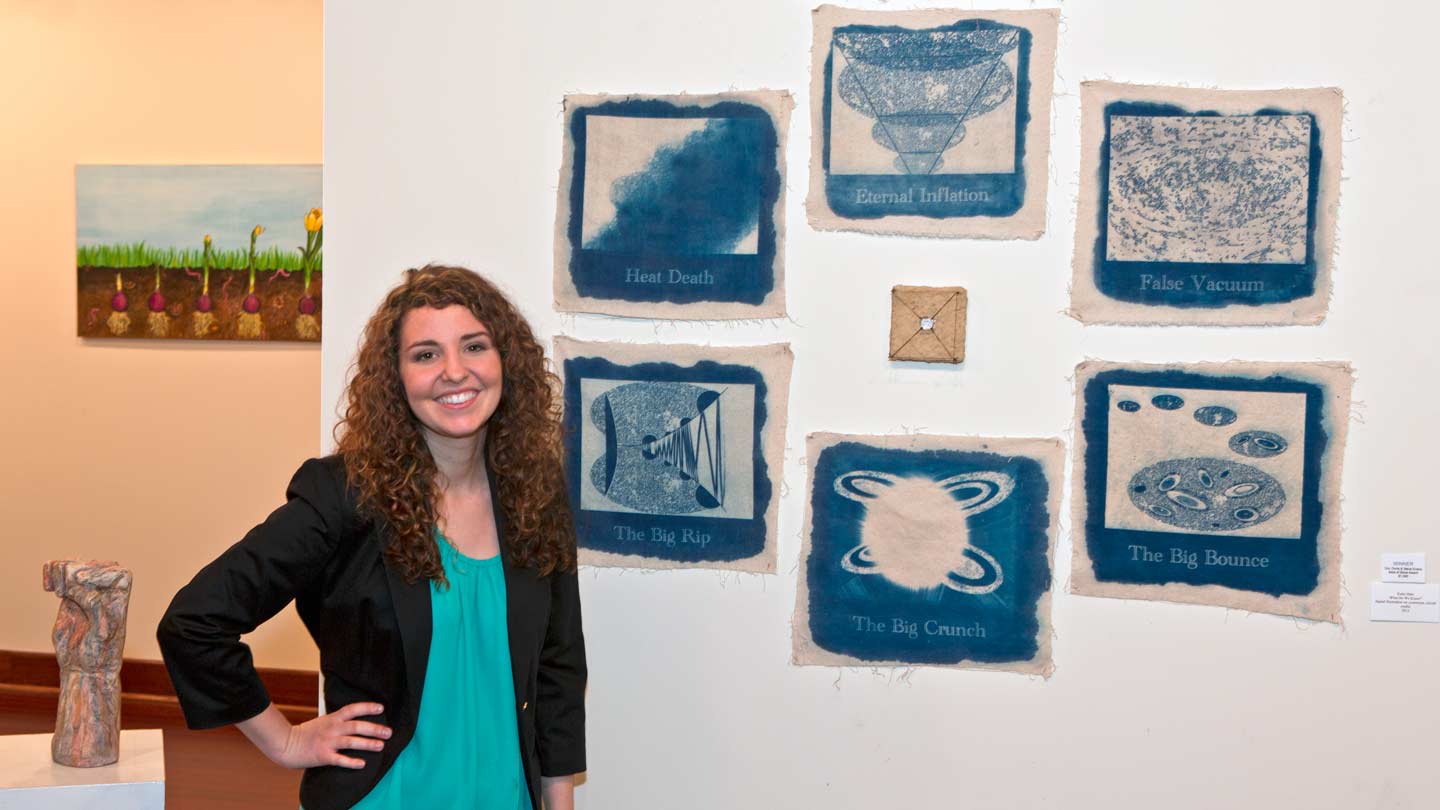 UAH graphic design major Katie Hale poses in front of her art show submission, What Do We Know?, which won the Evans Best in Show Award.

Katie Hale never intended to go to The University of Alabama in Huntsville (UAH).

"I grew up around here and went to Sparkman High School, and no one who lives here wants to stay here and go to school!" she says with a laugh. "You want to leave the nest. So I was dead set on going somewhere else."

But after she received a four-year scholarship for academic excellence, her parents were able to talk her into attending UAH. "They were like, we don't want you to graduate with debt," she says.

Turns out her parents were right. Not only has Hale been able to graduate debt-free with a Bachelor of Fine Arts (BFA) degree, but she now looks back on her time at UAH with nothing but fond memories.

"I wouldn't have traded it for anything," she says. "The Art Department here is the most nurturing and best department! The professors go beyond being teachers; they know your work, they're there to talk to you, and they email you all the time."

Hale was one of two spring graduates to receive the newly established BFA degree, and the very first to receive one with a concentration in graphic design. But because the program hadn't been in place at the time she started, Hale ended up having to add an extra year to her academic career.

For most people, that would be a source of frustration. But not for Hale. "It was the degree I wanted," she says with equanimity. "And in this last year, I've really come into my own. At first you want to make things that look pretty. But as you evolve, you become a conceptual thinker and make more meaningful things."

Her first submission, What Do We Know?, garnered the Evans Best in Show Award. The award comes with a $1000 prize and is sponsored by Dr. Dorla Evans, a professor of finance at UAH, and her husband Steve Evans; both are long-time advocates of the arts.

Featuring graphic representations of six "Fates of the Universe," What Do We Know? centers on a tiny metal ring mounted on a small square. Inside the ring is a scrap of paper with a quote from poet William Blake's "Auguries of Innocence":

"I was thinking about these theories of how the universe would end and how, as a society, we're obsessed with apocalyptic things," she says. "So my piece had to do with how people are connected and how these scientists come up with these big grand theories they pass off as fact."

And the poetic excerpt? That, she says, is satirical. "I thought it fit well. Scientists will tell you what they think will happen, but how much further have we come since they said the earth was flat? You have to find your own truth."

Hale's second submission, String Theory, won the Laney 3-D Award, a $100 prize sponsored by Jim Laney, the department's sculpture shop technician. The piece consists of a map overlaid with a string grid, which Hale says represents "how we are all connected on varying levels - emotionally, socially, physically." 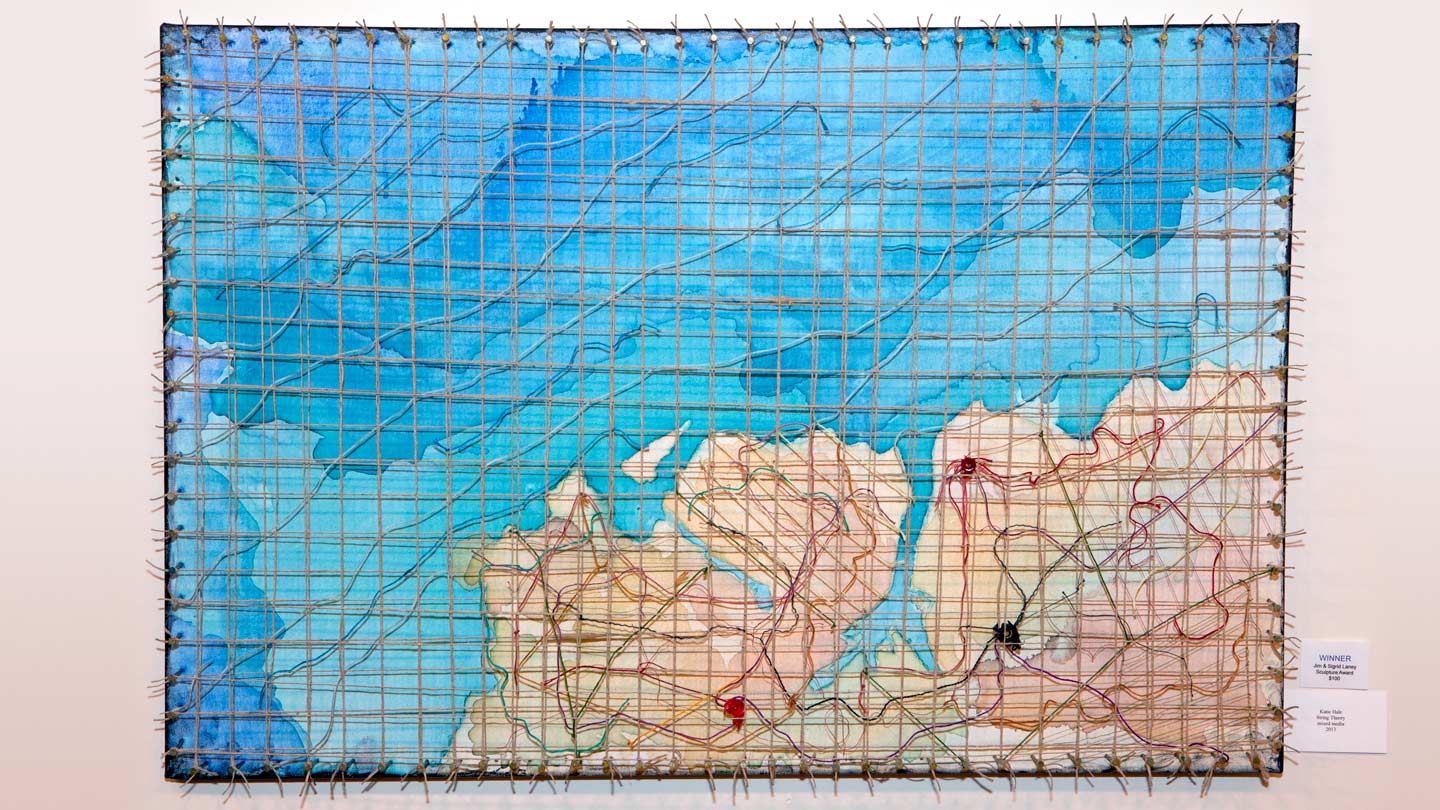 But while Hale was pleased with her pieces, she never expected to win, let alone have her work speak to an audience outside of the art community. So she was pleasantly surprised, she says, when she was approached by a fellow student and physics major who seemed to understand the pieces' message.

"Art majors are immersed in this weird funky place where we're trained to think like that, but he looked at What Do We Know? and he said, 'You totally nailed it! It's so correct!'" says Hale. "So before I even won anything, I was just on cloud nine that I connected with someone from a totally different mindset."

That Hale has been able to give her work such depth while at the same time connecting with people from all walks of life has not gone unnoticed by her professors, says Dr. Lillian Joyce, chair of the Art & Art History Department.

"There is not a professor in the department who has not been impressed with Katie's work. In every area she has pursued, she has excelled," says Dr. Joyce. "Katie takes all of her projects past simple ends and obvious solutions. She thinks about projects from many angles and always presents something fresh and intriguing."

It's a talent she's nurtured outside the classroom, too. Over the course of her academic career, Hale contributed to several collaborations between the university and the community at large, including a website detailing the use of concentration camp labor to develop the V-2 missile.

That has made her something of an "ambassador for our program," says Jill Johnson, an associate professor and painting instructor in the Art & Art History Department. "Whenever she has been involved in a project, we get outstanding comments on her."

And not just on her artistic ability, but also on her ability to merge art and technology to better convey the message. Take it from Dr. John Kvach, an assistant professor of history at UAH, who enlisted Hale to create a website for a project memorializing the Civil War in Madison County.

"Katie emerged as a creative leader who not only developed the website but who also helped overcome complex technological hurdles," says Kvach. "Her creativity and intuitiveness will keep her busy after she graduates from UAH."

It's a rare combination of skills, one that dates back to when "social media first started," she says. "In high school, I used to do graphic design stuff, like writing my own code and designing websites. I just Googled it and learned."

At first you want to make things that look pretty. But as you evolve, you become a conceptual thinker and make more meaningful things.

The appeal, she says, was being able to express oneself on the Internet in a way that retained one's individuality. And during an internship with local graphic design house Rooster Tail Designs during her senior year at UAH, she was able to help professional clients do just that.

"It was satisfying to help someone pursue their dream and come into their own," she says. "Clients were excited about getting their logo and design. You sit down and talk to them and you find out they know more about what they want than they even realize."

As for what's next, Hale says she would like to continue down the path she is on. "Graphic design is what I've known, so I think I want to go work for some corporations for a while and see what it's like to do for a living," she says.

And if that doesn't work out - "if I really hate it and it's just completely soul wrenching," she says - then she will consider graduate school. Only not a high-pressure art school, she says, but rather a nurturing one similar to UAH.

"I really enjoyed the experience I had here. Our department was like a small family, and you wouldn't expect that at a technically focused school," she says. "So I think going into a place where you don't expect this grand thing that's been built up, I think it's a good thing."

Of course, she could always ask her parents what to do. After all, they were right on two counts about her coming to UAH - not only did she love it here, but she was also able to afford the high-quality education she received.

But Hale says about the only advice she's getting from them since moving back home is to clean up her stuff. "I think I took over our dining room - it ceased to be our dining room," she says with a laugh. "My mom's like we need to find you a place!"