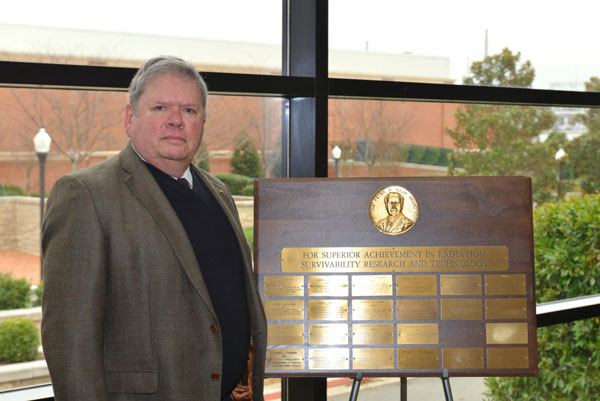 Dr. William A. Seidler II, a senior research scientist at The University of Alabama in Huntsville’s Research Institute, is the recipient of the Peter Haas Award by the Hardened Electronics and Radiation Technology Conference.

HUNTSVILLE, Ala. (March 20, 2014) - Dr. William A. Seidler, a senior research scientist at The University of Alabama in Huntsville (UAH) Research Institute, has been awarded the Peter Haas Award by the Hardened Electronics and Radiation Technology (HEART) Conference for his contributions to the nuclear survivability of military systems.

The Peter Haas Award was developed by the HEART Conference in 1990 to recognize individuals "who have demonstrated outstanding and innovative technical contributions or leadership in the successful development of U.S. hardened military and space systems." The HEART Conference is the premier government conference for the dissemination of restricted information on nuclear radiation effects on electronic systems.

Peter Haas was a pioneer in the field of nuclear weapons effects beginning in the mid 1950s. He proposed and conducted some of the landmark experiments on nuclear effects on electronic systems at the Nevada and Pacific Nuclear Test Sites. After joining the Defense Nuclear Agency in 1965, Mr. Haas rose to the position of deputy director of science and technology, where he was a strong advocate for nuclear weapons effects testing.

Dr. Seidler is supporting the UAH Propulsion Research Center in the development of its Fusion Propulsion Research Facility. In 2011, he successfully brokered the transfer of a three-terawatt pulse power facility from the Defense Threat Reduction Agency to UAH to enable experiments in fusion as a potential propulsion technology for human space flight. Since the world's electrical power grid is 15 terawatts, this facility generates 20 percent of the entire world's power in the tenth of a microsecond during which it operates. These energetic pulses are capable of generating fusion reactions in low-cost fuels that could be used for a fusion propulsion system capable of transporting astronauts to Mars and the outer planets in weeks instead of years.

Dr. Seidler was a senior technical fellow of the Boeing Company with over 40 years of experience in nuclear weapons effects and homeland security. He is one of the country's leading experts in nuclear weapons identification, effects, test and evaluation. He has served as a senior advisor for the Dept. of Energy Stockpile Stewardship Radiation Effects Program at Sandia National Laboratories and the deputy for the Boeing Defense, Space and Security Systems on the Senior Technical Fellowship Leadership Team responsible for technical excellence in Boeing's engineering team.

Dr. Seidler pioneered the field of box Internal Electromagnetic Pulse, an effect generated by the high energy X and gamma rays from a nuclear burst, determined the limits to reducing the current delivered to components on circuit boards and verified his analyses through experiments. He performed research in System Generated Electromagnetic Pulse (SGEMP) generation and propagation phenomena; developed 3-D techniques for prediction of satellite responses to SGEMP; initiated an EMP close-in-coupling program for the Minuteman follow-on missile system; and developed an advanced nonlinear treatment of the electron plasma from a nuclear detonation.

Dr. Seidler has received his IEEE Fellow Award in 1990, "for contribution to research in electromagnetic pulse effects" and his Life Fellow Award in 2012 for his achievements. He has over 50 papers in referred journals and over 20 professional awards.