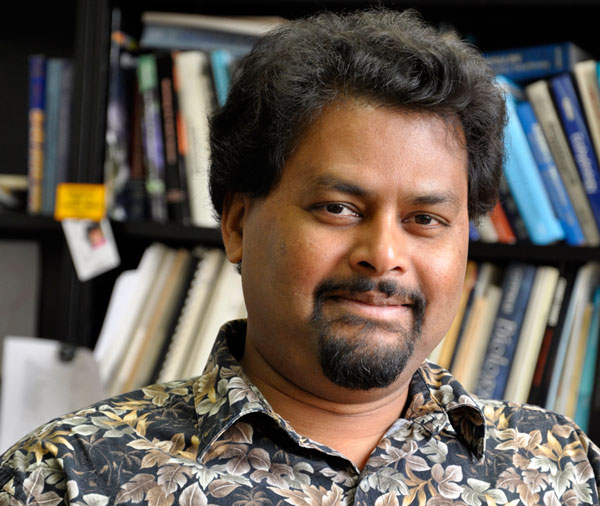 HUNTSVILLE, Ala. (March 18, 2014) - Dr. Udaysankar Nair, an assistant professor in The University of Alabama in Huntsville's Atmospheric Science Department, has been awarded an almost $750,000 Faculty Early Career Development grant from the National Science Foundation.

The five-year grant will support both a study of land use and land cover changes on Asian islands, how those changes might be altering weather patterns and a multi-disciplinary project to develop new tools for teaching atmospheric dynamics.

Nair is the first atmospheric science faculty member to receive an NSF CAREER award. One of the NSF's most prestigious awards, grants through the CAREER program support junior faculty who are establishing their careers in research and education.

Working with Andrea Word-Allbritton in UAH's English Department and UAH alumnus Rahul Ramachandran at NASA, Nair's plan is to develop educational tools that introduce students to "big data," such as the meteorological data collected by NOAA and NASA satellites, show them how to use data tools, then let them explore that data in areas that interest the students.

The land use change research will initially use satellite data and modeling to look at how deforestation and other land use and cover changes over Asian islands might be changing weather patterns, although Nair hopes to include some fieldwork in the project.

"In coastal southeastern Asia, many areas are having large changes happen due to deforestation, or the change of large areas from forest to either farming and other agricultural uses or urbanization," he said. "Early research is showing that these land cover and land use changes can have a high impact on the island environments. This is potentially important, but we don't know much about it."

Islands can have a significant impact on maritime weather, either by causing surface turbulence due to trees and other ground cover, by serving as sources of convection, or through atmospheric interaction with mountains or other topography.

"Little is known about these issues, so we're going to look at several things," Nair said. "How big does an island have to be to have an impact on large-scale weather? How does an island's shape - whether it is round or elongated, for instance - change weather patterns? Does the effect of an island's shape change according to its orientation relative to prevailing sea breezes?"