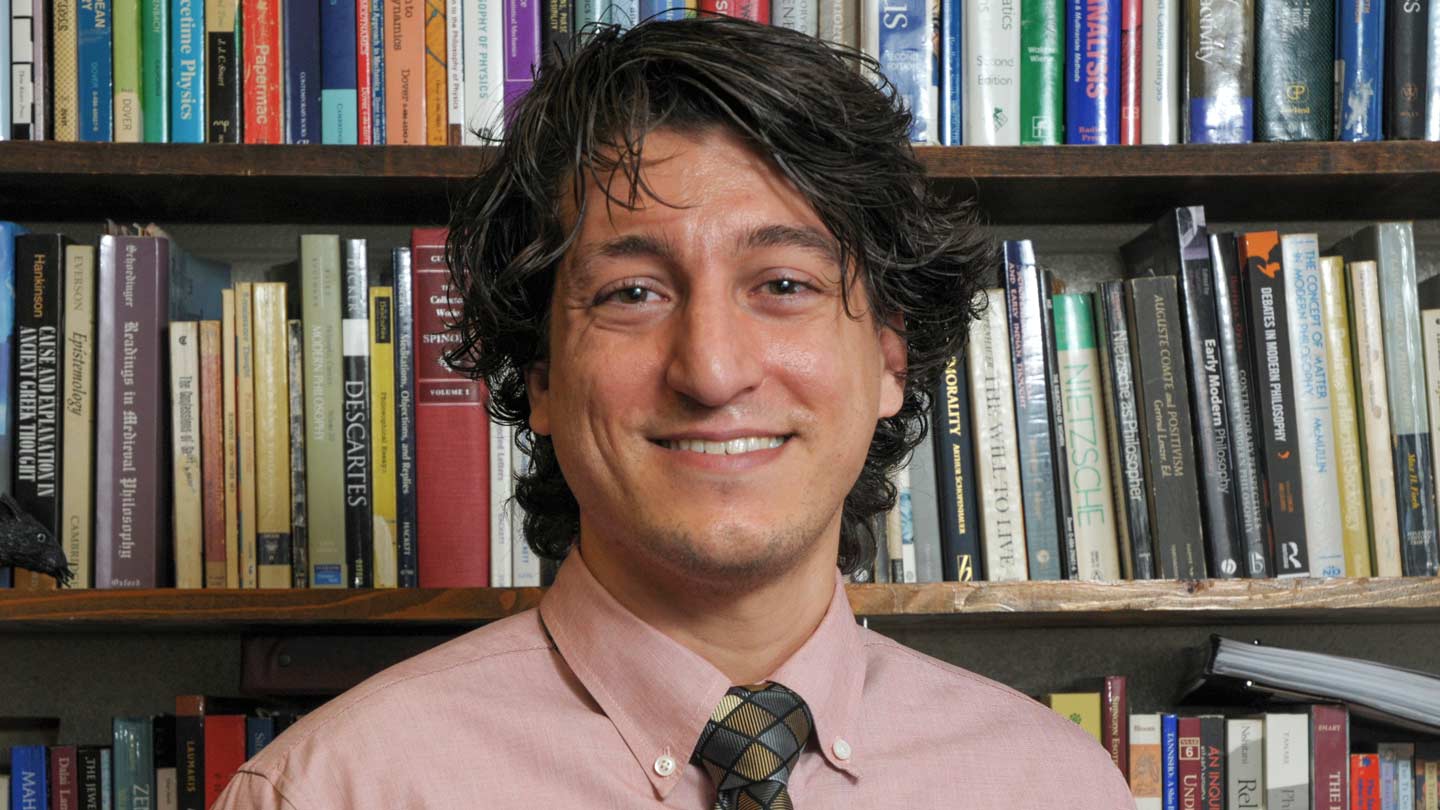 Dr. Nicholaos Jones, associate professor of philosophy, will spent the fall semester as a visiting fellow at the University of Pittsburgh's Center for Philosophy of Science.

Dr. Nicholaos Jones, an associate professor at The University of Alabama in Huntsville (UAH), specializes in the philosophy of science. And next semester, he'll have a unique opportunity to further his research thanks to a visiting fellowship at the University of Pittsburgh's Center for Philosophy of Science.

"I think it will be a good chance to get to know a lot of people interested in the philosophy of science and to develop my work," says Dr. Jones, who will spend the upcoming fall semester at the center. "My goal – a modest goal – is to complete a paper while I'm there."

Each year, the internationally renowned center selects just a handful of scholars from all over the world to pursue their research in the philosophy of science or closely related fields. As a visiting fellow, Dr. Jones will receive a supplementary stipend for living expenses in addition to office space, library access, and the opportunity to attend conferences, workshops, and talks.

Dr. Jones is a scholar of remarkable breadth. He has made contributions to philosophy of physics, philosophy of biology and many more areas. We look forward to his visit in the Center next year.

"The only requirement is that you have to give a lunchtime talk to the center about your research project," he says. "That way, whoever is there can find other fellows who have common interests and they can work with each other or with the center's outstanding faculty."

It's an honor that reflects well on both UAH's Philosophy Department and the College of Liberal Arts. But it's hardly one that Dr. Jones could have foreseen when he originally set out as a freshman majoring in Physician Assistant Science at St. Francis University.

"They had a program where you could get your master's degree in five years," he says. "I did three years and then I decided I didn't want to be around sick people!" Instead, because of an inspiring teacher – Dr. G. Steven Neeley – he switched to philosophy, earning a bachelors degree in the field before enrolling in graduate school at Ohio State University.

There, Dr. Jones says he met a philosopher of science – Dr. Robert Batterman. "I had an interest in science already and he was already engaged in a study of the role of false assumptions in physics, so I wrote my dissertation on that subject."

After graduating with his Ph.D., he weighed three job offers before deciding to come to UAH. It was a choice he half-jokingly says was determined by Huntsville's mild climate, but it was one that would ultimately result in two very different but important events that would change the direction of his life.

The first was meeting and marrying Dr. Holly Jones (née Flint), an associate professor in the university's English Department. And the second was an academic collaboration with Dr. Olaf Wolkenhauer that, because of a chance encounter, would lay the groundwork for his upcoming fellowship.

Dr. Wolkenhauer then suggested Dr. Jones send the paper to a fellow professor he'd met at a conference and who had expressed interest in the topic. That professor? Dr. William Bechtel, a leading scholar in the field who had just recently been accepted as a senior fellow at the University of Pittsburgh's Center for Philosophy of Science.

"He encouraged me to apply," says Dr. Jones. "He thought it would be good if we could be in the same spot to work together." As for where that partnership will lead, he isn't certain. But if there's one thing he's learned over the course of the last few years it's that you can't plan your life too carefully.