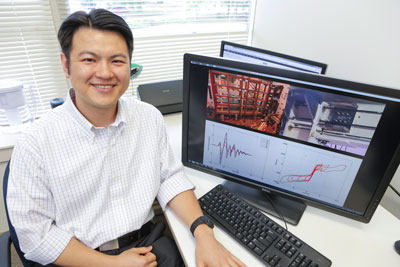 HUNTSVILLE, Ala. (August 27, 2013) - When Dr. Ying-Cheng Lin was an undergraduate majoring structural engineering in Taiwan, he knew that his studies would one day help him land a good job. But he never realized they would also save his life.

"In the 1999, a very big earthquake hit Taiwan," says Dr. Lin, an Assistant Professor of Structural Engineering at The University of Alabama in Huntsville (UAH). At the moment of impact, Lin was home with his girlfriend - now wife - and their dog.

"I thought I was going to die," he says. "But I knew where to go because I was a structural engineer. So we hid next to the column." They were the lucky ones. Ultimately, he says, the 90-second Chi-Chi earthquake left almost 3,000 dead and more than 40 buildings collapsed.

It was a transformative experience. Dr. Lin shifted his research focus to developing new techniques to make steel structures safer and more earthquake-resistant. And after graduating with his bachelor's and master's degrees from National Taiwan University, he started working at Taipei's National Center for Research on Earthquake Engineering.

But shortly thereafter, he says, he learned of another project at Lehigh University investigating self-centering (SC) damage-free seismic-resistant steel frame systems, an innovation with the potential to withstand even the most destructive earthquakes. Dr. Lin had found his niche.

I thought I was going to die…but I knew where to go because I was a structural engineer.

He applied to Lehigh's Ph.D. program, was accepted on a full scholarship, and joined the research team working on the SC steel frame systems. Their goal was to not only build a successful seismic-resistant damage-free structural system, but also understand the system's seismic response and create design procedures that could be applied or retrofitted to buildings in earthquake-prone areas.

Dr. Lin and his fellow researchers began by looking at what worked - and what didn't work - in conventional systems. One problem they identified was in the connection between the structure's components.

"In conventional systems, a structure's beams are fixed to its columns, so if they deform or rotate as the result of an earthquake, they are damaged," says Dr. Lin. "But in this system, a pre-stress method is used to compress the beam to the column, so if it rotates, there is a gap."

Another issue was the friction damper device, which is used to carry a structure's vertical gravity and lateral loads and limit friction between surfaces. In conventional structures, it's located at the top and bottom of the beam. But Dr. Lin and his team changed its placement to the beam's web, to avoid interference with the floor slab's construction and to dissipate the energy during the opening and closing of the gap in the connections. 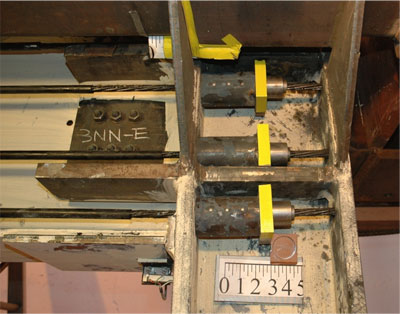 The 4-inch annealed steel tube with wooden disks, or fuse, is designed to be crushed before the post-tensioning elements reach their fracture strength.

And finally, they added a 4-inch annealed steel tube with wooden disks, or fuse, to the end of the post-tensioning elements. "Post-tensioning elements are critical members; if they break or yield, the system will fail," he says. "So a fuse will give it leeway, and a crushed fuse will let us know upon inspection that the structure was close to yield point."

Once all of these innovations were in place, Dr. Lin and his fellow researchers built a full-size, four-story, two-bay frame and tested it in a simulation laboratory equipped to generate multi-directional static and time-varying loads on large-scale structures.

"We connected four hydraulic actuators to the frame to replicate an earthquake, and then simulated 25 earthquakes at three different levels to study the reliability of the system," says Dr. Lin. "The first level was a frequently occurring earthquake, the second was a design basis earthquake, and the third was a maximum considered earthquake."

This is evidenced in the video to the right, in which the frame undergoes a simulated maximum considered earthquake and then self-centers at both the connection level and the system level.

It was a significant accomplishment, challenging conventional approaches to the design and construction of earthquake-resistant structures. And not just earthquake-resistant ones, points out Dr. Lin. Here in Huntsville, for example, the technology can be used to limit or even prevent tornado damage.

"We hope to develop a design code that we can present to design consulting companies," he says, "and we want to sell the technology to companies that can use it to develop their structures." That includes the Alabama Department of Transportation, whose bridges and other civil structures can be retrofitted with the fuses for greater reliability.