UAH professor hopes to use epigenome editing to fight disease 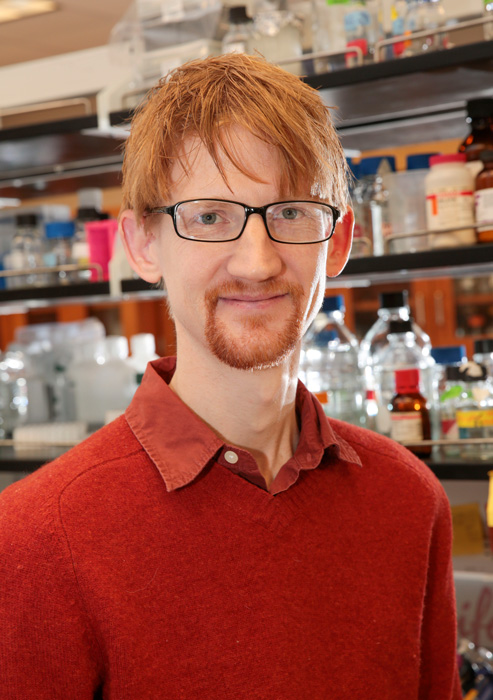 Growing up in Iowa, Dr. Eric Mendenhall says biology always "came really easily" to him. But other than becoming a doctor, which he wasn't interested in, he didn't know what to do with a degree in the field. That is, until he landed a job at a human genome lab as an undergraduate.

"I was just looking to see if research would interest me," he says. "But to see people analyze blood samples from patients with birth defects and figure out what genetic mutations they had - that seemed very proactive."

"My dissertation was on zebrafish blood formation," he says. "We were working on that as a model for cord blood and bone marrow transplants."

And he didn't stop there. "Then I went to go work on new things in Boston," he says, referring to his post-doctoral research at the prestigious Broad Institute of Harvard and MIT. "It was a great opportunity to delve deeper into investigating how the human genome functions."

Seven years later, Dr. Mendenhall is now building on that research as an assistant professor in the Biological Sciences Department at The University of Alabama in Huntsville, studying how certain parts of the human genome help establish the epigenome.

Like a set of instructions, he says, the epigenome tells the genome what to do, when to do it, and where to do it. And it does so using repressors and enhancers, which Dr. Mendenhall likens to switches that turn genes on or off.

"There are two reasons a gene can not be turned on - one is because its enhancers aren't turning it on, and the other is because its repressors are turning it off," says Dr. Mendenhall, adding that this can account for abnormalities and even lead to diseases like cancer.

We're all interested in identifying and solving diseases that are controlled by the epigenome.

But until you know what the function of the epigenome is, it's impossible to determine if it's working correctly. That's where the experimental tool that Dr. Mendenhall developed with his Broad Institute colleagues comes in. "It's a type of protein that is designed to fit perfectly with the cell's DNA and shut off the epigenome," he says.

Called a transcription activator-like effector, the protein is fused to certain enzymes that can chemically alter or inactivate the epigenome in a process known as epigenome editing. Eventually, he says, the goal is to use epigenome editing to identify the precise functions of these switches and prevent diseases.

To that end, his research was published in this past December's issue of the highly regarded journal Nature Biotechnology, making the tool available for free to researchers worldwide. "I've already gotten a lot of requests for it," he says.

He's also partnered with two genetics researchers at the Huntsville-based HudsonAlpha Institute, Dr. Richard Myers and Dr. Greg Cooper, to carry on the effort. "We're all interested in identifying and solving diseases that are controlled by the epigenome," says Dr. Mendenhall.

And next semester he'll introduce a new generation of scientists to the field with his research lab in the Shelby Center. "In my lab, the students will be hands-on," he says. "They will get a realistic view of what science research is in terms of how to generate and analyze data and how to form hypotheses."

If anyone knows how important that is for biology majors, it's the original "lab rat" himself - Dr. Mendenhall. "Even if they decide to go to nursing or medical school," he says, "their experience in the lab will benefit them going forward in their careers."