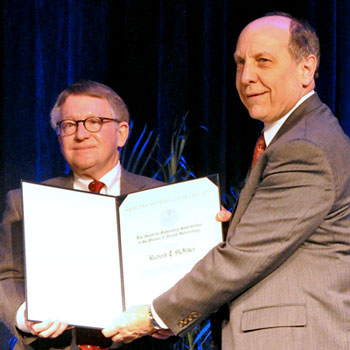 Dick McNider (left), a distinguished professor emeritus in mathematical sciences at The University of Alabama in Huntsville, was honored earlier this month by the American Meteorological Society for his contributions to applied meteorology.

HUNTSVILLE, Ala. (Jan. 24, 2013) — In a field of science notorious for complex formulas and interconnected variables, Dick McNider acknowledges that even by those standards his most recent scientific publication is a "nerdy paper," filled as it is (says a co-author) with "horrible partially differentiated equations."

"You can read the introduction and the conclusion and probably get all you need from that paper," said McNider, a distinguished professor emeritus in mathematical sciences at The University of Alabama in Huntsville. McNider was honored earlier this month by the American Meteorological Society for his contributions to applied meteorology.

The paper, titled "Response and sensitivity of the nocturnal boundary layer over land to added longwave radiative forcing," was published in the Journal of Geophysical Research in July 2012. Bottom line, what does the paper say? "We don't need to be using night time minimum temperatures to track global temperatures because they don’t reflect heat accumulating in the deep atmosphere," said McNider.

Because much of the "global warming" recorded in the historical data recent decades is due to rising nighttime temperatures, that isn't necessarily a popular finding in one wing of the highly politicized world of climate science. After reading the paper (or at least the introduction and conclusion), one blogger suggested McNider should stay away from studying climate change and stick to his specialty — dealing with drought and promoting sustainable irrigation in Alabama and the southeastern U.S.

"She said I shouldn't meddle in those things because I'm an agricultural planner," McNider said with a grin.

While his work with the Alabama Irrigation Initiative is noted by the AMS in McNider's award citation, that has been McNider's "specialty" for only about a decade. Before the south Alabama native turned his attention to resurrecting row crop farming in the state, McNider was a pioneer in regional-scale weather modeling.

He first gained some fame in 1987, when Dennis Conner used McNider's models of wind patterns off the west coast of Australia to win (back) the America's Cup.

After a chemical leak at a Union Carbide plan in India killed more than 3,000 people in the city of Bhopal, officials in India turned to McNider to develop an ambient airflow model for the community to both better explain how the poisonous chemical flowed from the plant to the city and to inform future industrial plant site planning guidelines.

McNider was a key member of the scientific team that studied the processes that form the air pollutant ozone at low altitudes in southeastern states, so the Environmental Protection Agency could formulate cost effective, region-specific strategies for cutting air pollution.

In recent years he has studied and modeled the formation, strength and duration of the nighttime boundary layer, with special interest in its effects on both air pollution and regional temperatures.

In the 1990s he studied and modeled katabatic (sinking cold air) winds in the Antarctic and their possible effects on how much carbon dioxide the southern oceans absorb from the atmosphere — a potentially important mechanism influencing global climate change.

"I feel like I spent most of my life working on real, applied problems, like air pollution and drought monitoring," said McNider. "I think what I've done my whole life is take mathematical tools and try to solve real world problems with them. I've always gained a lot of satisfaction from applying my theoretical training to real, applied problems."

McNider received the AMS' award for outstanding contribution to the advancement of applied meteorology at the AMS annual meeting Jan. 9 in Austin, Texas.