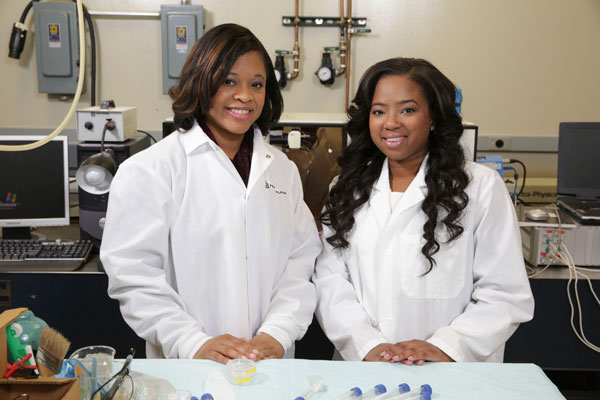 Agee (BS, MS Biological Science 2010), a doctoral candidate in Biotechnology, Science and Engineering, and Wallace (MS Chemistry 2012), a doctoral student in Materials Science, will attend the two-day conference courtesy of the UAH Office of Diversity. Agee was one of five black student leaders recently profiled in the Clinton Global Initiative national newsletter here:

President William Clinton, Secretary Hillary Clinton, and Chelsea Clinton will host the 2014 CGI U at Arizona State University. Established in 2005, the CGI U is a growing community of student innovators and entrepreneurs working to turn ideas into action. The annual conference also allows students to discuss global issues, develop practical skills, identify potential partners, and formulate concrete plans of action for the future.

She also earned a Bachelor's degree in Biology from Spelman College, and is a member of the Morehouse/Spelman Professional Network. Agee is expected to complete her doctoral degree in biotechnology from UAH in December.

In addition to completing her PhD degree, Wallace holds memberships in several professional organizations, including the National Organization of Black Chemists and Chemical Engineers, the American Association for University Women, the UAH Minority Graduate Student Association, the Alabama Women Student Leaders Conference, and the UAH Alumni Association. She also earned a Bachelor's degree in Chemistry from Alabama State University. Wallace is expected to complete her doctoral degree in materials science from UAH in May 2016.

Additionally, Agee and Wallace are on the planning team for Tech Trek at UAH, a STEM-centered summer residence camp for girls that will be hosted on the UAH campus July 20-25.