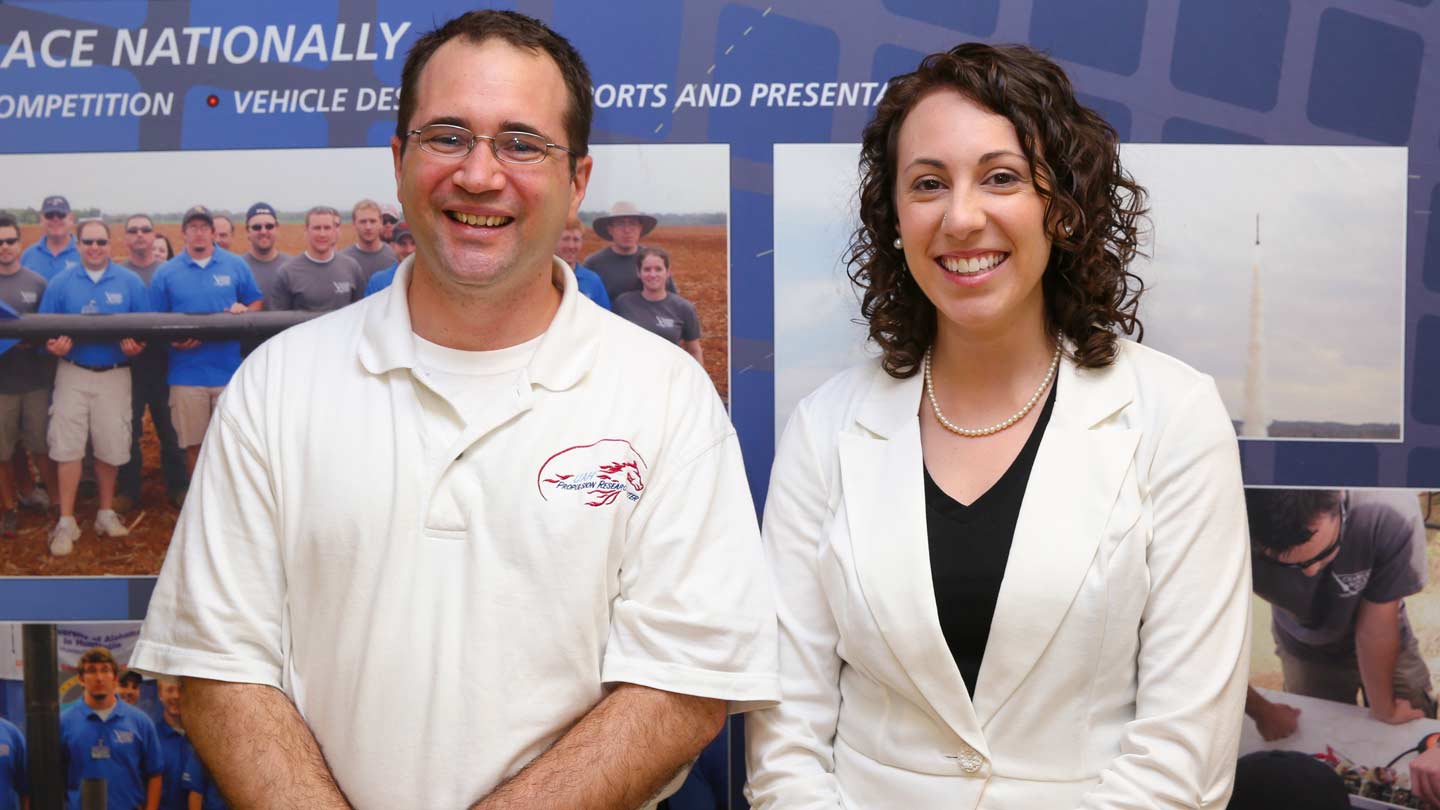 Dr. Jason Cassibry, associate professor of Mechanical and Aerospace Engineering, with graduating senior Stephanie Shelton who will soon be working with NASA at the Johnson Space Center in Houston.

Stephanie Shelton's love affair with all things engineering began as a young girl when her grandfather showed her how to use simple tools to build random projects. When she was 12 years old, Stephanie's keen interest in how things work and the wonder of how airplanes fly and make noise turned into an obsession after her parents took her to a Blue Angels Air Show in Huntsville.

"The Blue Angels were there with other fighter and trick planes. I fell in love with the sound they made as they flew over us. I wanted to know more about them, how they worked, what made that sound and how I could ride in one," said Shelton, a senior aerospace engineering student at The University of Alabama in Huntsville (UAH).

Shelton vividly remembers the day she decided her career path. "We were on a family trip in the Chicago area and everyone was ready to leave the hotel…I wouldn't go until I watched the shuttle launch. I really became fascinated with NASA at that point, " she said.

Always a "curious person," Shelton didn't know what she wanted to do professionally-but she had a general idea. "I wanted to work on something that pushed the limits; rockets, fast cars, and fighter jets. I wanted to learn more."

I wanted to work on something that pushed the limits; rockets, fast cars, and fighter jets. I wanted to learn more.

A graduate of Sparkman High School, Shelton is quick to point out that she didn't take honors classes. She took an introduction to engineering class - one of the few career readiness classes that interested her that Sparkman offered. "I didn't receive any scholarships for college although I filled out tons of applications, but I never let that stop me from trying. I quickly learned and kept telling myself, 'Do not tell yourself no, keep going until someone else tells you no'. Even then I found some way around that and kept going."

She chose UAH because the university's word-of-mouth reputation in the field of propulsion research was the best. "I asked several people where to go to school for engineering. Almost all of them said UAH. I saw all of the propulsion research they did and was sold!" A huge bonus for Shelton was the close proximity of Cummings Research Park, NASA and the Department of Defense to the UAH campus.

As she prepares to leave UAH, Shelton reflects about her home away from home for the last few years. "UAH has been a tough school. I knew engineering would be hard and challenging; I just didn't realize to what extent. Getting the co-op positions really showed me what I was working for and gave me something to look forward to.

"Physics was the first university class I really enjoyed…math finally had a purpose. I have really enjoyed my upper level classes, and I learned why engines work the way they do. Being able to calculate the orbital mechanics of a mission to Mars is crazy cool," Shelton said. "I cannot say thank you enough to all of my professors who took the time to explain and re-explain concepts to me, and I am really grateful my UAH professors took the time to share knowledge. It makes a world of difference when the professor cares about teaching."

"Stephanie is a bright student, and what makes her stand out is that she frequently stayed after class and attended office hours to make sure she understood the material. Very few students are as methodical and disciplined as she has been," said Dr. Jason Cassibry, associate professor UAH Department of Mechanical and Aerospace Engineering-Propulsion Research Center.

"It's no surprise that she has a great employment opportunity lined up with the NASA Johnson Space Center (JSC). She worked with the dynamic robotic facilities group in the summer of 2013 on a Multi-Mission Space Exploration Vehicle, in which she helped film a ( promotional video for NASA education ). Based on her academic achievements here at UAH, her strong work ethic, and her affable personality, that same group has hired her for full time employment when she graduates. I have no doubt she will be successful in all her endeavors," Cassibry said.

Shelton has worked several Cooperative Education jobs while attending UAH. Her very first assignment in 2011 was with Jacobs Technology in Houston. "I worked with the Capsule Parachute Assembly Team. The group was responsible for design modifications and testing the parachutes for Orion. I never knew how complex and truly amazing parachutes were..."

In 2012 she accepted a second co-op position at JSC. "I worked in the ISS communications group, with flight controllers who work on the CRONUS console in Mission Control. I was trained as a flight controller and helped update operations procedures for real time missions. I worked several shifts in Mission Control with my mentor, and I got to watch the first Dragon ISS docking first hand from that room. They give you real work and you become part of the team."

Last summer Shelton worked in the Extra Vehicular Activity (EVA) group. "I learned about the space suit, EVA tools, EVA operations, emergency, and all of the base line classes. I also became an instructor and taught a class about the EVA space suit. I worked with astronauts and watched them practice EVA missions in the Neutral Buoyancy Lab. It was an amazing summer."

After graduating from UAH on Sunday, May 3, Shelton will begin work full-time at the JSC. Her exceptional co-op work in the engineering directorate designing and machining parts for the Multi-Mission Space Exploration Vehicle (SEV) led to full-time employment with the team. "I cannot wait until this vehicle goes to space!"

As a co-op worker, NASA encouraged Shelton and other students to volunteer as much as possible for educational outreach projects such as the Texas High School Aerospace Scholars. "Students from all over Texas compete for a chance to come work at JSC on a Mars Rover Competition. I was a student mentor to a group of senior high school students. I helped with solving problems with their rover and planning their mission to Mars. We also created YouTube videos to promote NASA's cool projects. We want to help inspire and encourage the next generation of engineers."

Of the many things Shelton has learned during her years at UAH, developing "a hard and long work ethic" ranks at the top of the list. "I think overall UAH has done a good job preparing students for the professional world by having such a broad spectrum of engineering classes. It's a bummer to write so many lab papers, but it has definitely helped me become a better writer, and the skills will help me in the workplace setting."

Unlike most other engineering students, Stephanie did not work on any research projects. "Once I got my co-op position I didn't have time to work on research. I started traveling to Houston every other semester, and I did not want to give up working at NASA for a research position. I have had some great mentors over the years. My first mentor did a great job teaching and showing me the importance of networking. If she had not helped me I probably would not have gotten into the NASA Co-op Program."

Shelton's mantra, 'Do not tell yourself no, keep going…' paid off big time when interviewing for a co-op position. "They asked me what design and manufacturing experience I had, and I told them 'none that's why I 'm here'. I was interested in designing and wanted to learn more, so why not learn it from the best. I was hired five minutes later. Although I wasn't qualified for that position, I did not let that stop me from trying and learning as much as I could."

Shelton's tenaciousness was rewarded when the JSC offered her a full-time job months before she graduates from UAH. "Starting a job with a huge learning curve was great for me. That extra stress pushes you that little bit more and you learn so much it's amazing."

While all the accolades of getting through school and landing an impressive job with NASA is a huge accomplishment for an undergrad student, it is always fresh in Shelton's mind that she would not be were she is today without the love and guidance of her parents and grandparents.

"My parents did a great job raising me and my younger sister, Megan. They encouraged us to go to college and pursue a degree that would be interesting and we could still make a good living," Shelton said. "If we struggled with something they were there to help us find a solution. They always encouraged creativity." Knowing their oldest daughter was interested in engineering, the Shelton's bought Legos and K'NEX sets. "I would build little projects until my fingers hurt. Little did they know, I was asked to build a rocket model out of K'NEX at my first internship. I don't know where I would be if my parents and grandparents were not as supportive as they were - and still are today."

Although Shelton doesn't know the specifics of what she will be doing with the SEV team at JSC, she is pretty sure she will be designing, testing and building parts for various projects. "My projects could include: the Orion Hatch, SAFER (jet pack) for the new space suite, MMSEV (rover), or ARGOS (a system that simulates reduced gravity)."