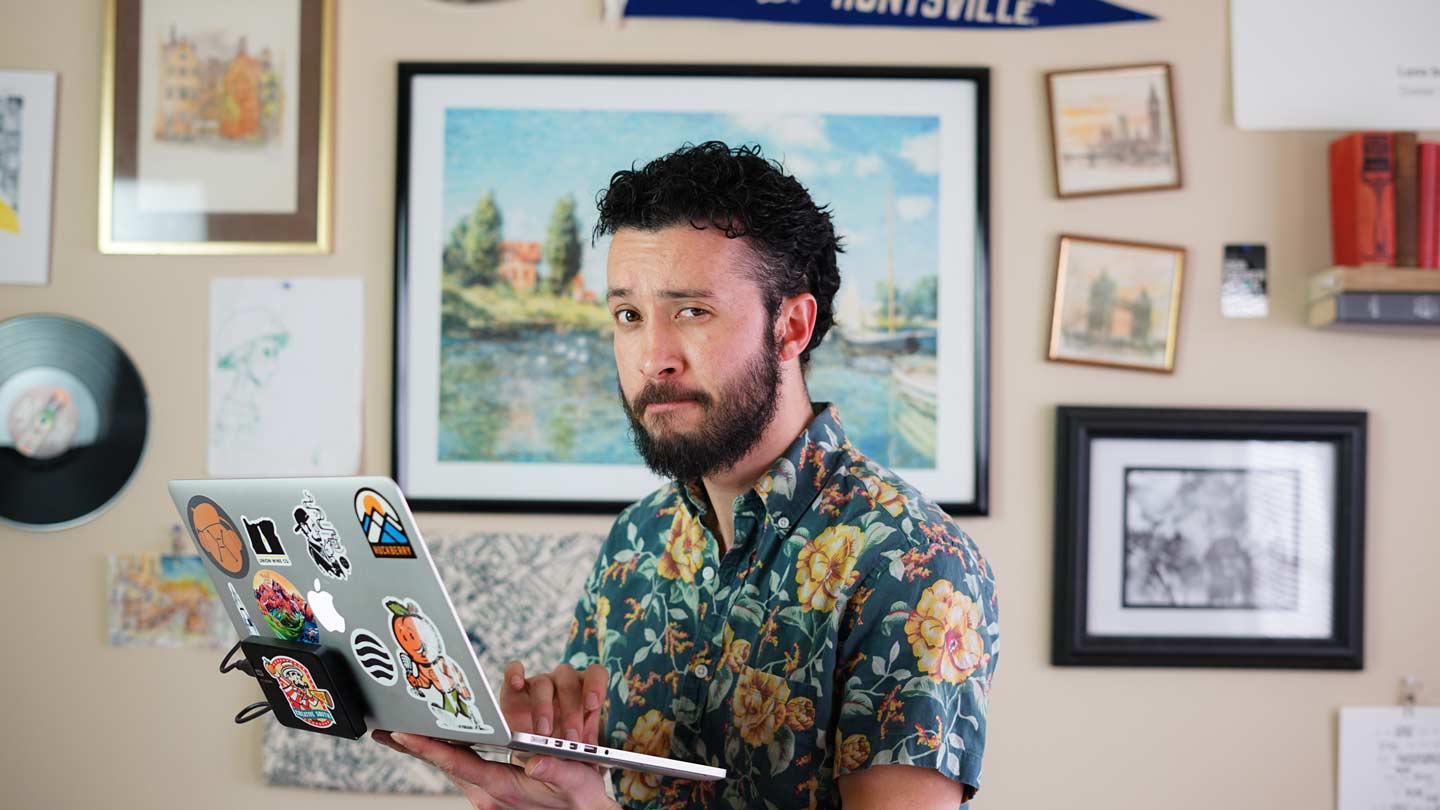 If Emory Eledui (’11, BSE, ME) had listened to all the naysayers, he would have blown "the best career decision ever."

The University of Alabama in Huntsville (UAH) mechanical engineering alumnus is director of Research and Development (R&D) at Holtz Leather Company in Huntsville. "At the time, people said I was ‘throwing away my career’ to take this job, but it’s the best professional decision I’ve ever made. Working in the entrepreneurial environment of the company has strengthened my drive to innovate."

Born in El Paso, TX, Eledui’s family moved to Huntsville because his dad was in the military. "We moved around the country a lot including my dad’s two assignments at Redstone Arsenal. I’ve lived here for nearly 20 years." Eledui was home-schooled until he began his freshman year at UAH. "By the time I was in high school we were living in Huntsville. Hashtag commuter-life! I was interested in engineering as an academic major because I wanted a career working with my hands, so it just made sense to go to UAH."

Eledui said that, from the beginning, studying engineering at the university laid a bedrock foundation of hard work. "At one point, I remember feeling overwhelmed with homework, projects, and studying. I told my dad I wanted to switch my major from engineering to anything else because engineering was just too hard to be worth it. He explained that you couldn’t go through life avoiding hard work. Anything worthwhile will take effort and will even at times require you to do things you don’t want to do." Eledui said the no-nonsense advice from his dad and the practice of hard work gained in the classrooms of UAH has remained with him over the years.

Eledui fondly remembers one of his professors, Dr. Francis "Fran" Wessling, who not only was a great engineering professor, but who also shared invaluable life lessons as well. "Dr. Wessling’s Introduction to Heat and Mass Transfer course was my favorite class while attending UAH," Eledui said. "Dr. Wessling was so much more than just a professor, he was committed to preparing us for all areas of life after graduation. From engineering ethics to leadership to being a leader and family man."

In the same class, Eledui said, Wessling instructed students to conduct a thermal analysis of a local farmer’s greenhouse. Students were tasked with giving Wessling recommendations on how the farmer could combine aquaculture with hydroponics to optimize a sustainable food production system for the farm. "This was how engineering really came to life for me…when I saw how we could directly impact someone."

Having always dreamed of joining the Army, Eledui decided in his freshmen year at UAH to make a service commitment through the Army ROTC Program. Eledui’s contracted military agreement was to serve as an officer after graduating from the university. Commissioned as an Armor Officer in the U.S. Army, he began Airborne and Ranger training at Fort Benning (GA). After officer training ended, Eledui was stationed at Fort Polk (LA). At the end of his four-year service commitment, Eledui moved back to Huntsville and began working for a contracting company.

"During this time I began exploring a lot of different business ideas. Everything from designing men’s neckties out of canvas to developing photo and video," said Eledui. "The neckties never took off but after making a YouTube Spotlight Video about the grand opening of Holtz Leather, I was approached by the owners, Rick and Coleen Holtz, and asked if I would join their team as a videographer. The drive to achieve had atrophied since leaving the military, but working daily alongside such a visionary team at Holtz renewed my energy to try out my ideas."

Under the mentorship of Rick Holtz, Eledui launched a media production company, Dewy Creative. He traveled to Italy and produced a documentary about the Italian Coffee Culture. And, Eledui will soon launch a men’s lifestyle/fashion website. "I wanted to combine my love of photography and video with my passion for the outdoors."

Eledui is quick to describe the magic of his job as director of R&D at Holtz Leather. "One of the many great things we do at Holtz is we have some amazing brainstorming sessions. However, once we come out of those sessions someone has to start the forward momentum, which is where I come in. I start by identifying the big rocks that will act as the stepping-stones to get us where we need to be. From those big rocks I break down timelines, systems, workflows, and personnel to make each step come together."

In addition to his R&D duties, Eledui also assists the creative media team with filming television commercials, shooting photography, and helping with design proofs for the catalog. While Eledui is the only UAH alumnus working at Holtz, during the past year the store has employed up to four students.

There is no denying the hard work principle has stuck with Eledui. "Most of last year, I would come home from my job at Holtz, eat dinner and then work on personal projects until I go to bed. On Saturdays, I spend the early morning with my extended family and work the rest of the day. After church on Sunday, it’s the same routine."

The one exception to his "work, work, work," routine was a rare trip to India last November. "I was able to travel to remote parts of the country to help film a video highlighting the philanthropic work of Never Thirst Water, bringing clean water to people who don’t have access to safe drinking water," he said. "For a long time I used to think, ‘once, I make it big I will give back and serve the Lord with my skills’. I realized I had gotten the cart before the horse. Instead of waiting to be blessed to bless others, it’s important to seek to help others with whatever little you have."

Eledui’s advice to young women and men seeking a successful career in the fields of engineering, business, and entrepreneurship is simple: imagine the future. "It’s so true that you are the average of the people you most often associate with. Therefore, surround yourself with the people you want to be like in a few years. Working under a brilliant visionary has inspired me to explore and start more projects in the past year than I have in my entire life. That fire is contagious, so stand close."