HUNTSVILLE, Ala. (April 10, 2013) - Venomous Speech: Problems With American Political Discourse on the Right and Left, by University of Alabama in Huntsville's (UAH) Dr. Clarke Rountree, gives a blunt assessment of the dysfunction in our political system today.

Published by Praeger Press earlier this month, Venomous Speech contains essays by some of the country's most prominent scholars of political communication. Rountree, professor and chairperson of the UAH Communications Department, edited the book and was also a contributing writer.

Rountree's introductory chapter argues that current problems in American political discourse have relatively recent origins stemming from cultural and technological changes in political news coverage, the reshuffling of political parties, the campaign finance revolution, and a new culture of fear that is undermining our most basic political values. These sources have contributed to venomous and problematic discourse from both sides of the political spectrum, as well as gridlock such as we witnessed in the summer 2011 U.S. federal debt crisis that led to a downgrading of American credit for the first time in history.

Venomous Speech provides a frank, hard-nosed look at what needs fixing, offers a critical lens from knowledgeable writers to help those frustrated with our political system to better understand why our discourse is so troubled, and lays out suggestions for reclaiming the commonwealth.

Rountree received his doctorate in rhetorical studies from the University of Iowa. He has published numerous books and articles on legal and political discourse, including The Chameleon President: The Curious Case of George W. Bush, George W. Bush: A Biography, and Judging the Supreme Court: Constructions of Motives in Bush v. Gore, winner of the 2009 Kohrs-Campbell Prize in Rhetorical Criticism.

Venomous Speech is available from Praeger Press and on amazon.com. 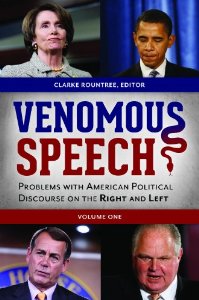