UAH communication professor to edit series on rhetoric and law 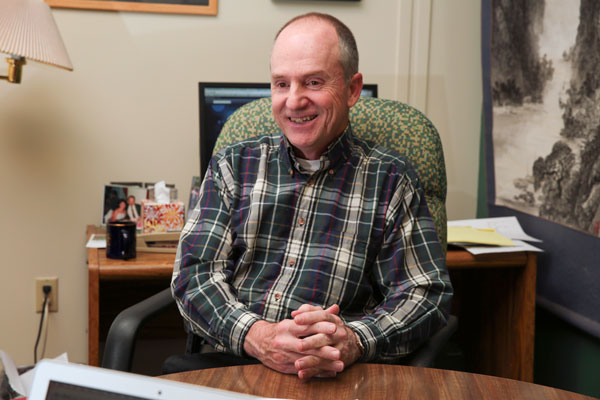 HUNTSVILLE, Ala. (April 23, 2014) - Dr. Clarke Rountree is no stranger to publishing. The professor and chair of the Department of Communication Arts at The University of Alabama in Huntsville (UAH) has already written five books and numerous articles. But now he's taking on another role: series editor of "Rhetoric, Law, & the Humanities" (University of Alabama Press).

"I made my pitch by saying that we have a critical mass of scholars ready to write in this area," says Dr. Rountree, who is also a UAH alumnus. "Most series about rhetoric tend to be directed more toward the communication field, but I'm specifically trying to bring people from law and people from communications together."

It's a field that has fascinated Dr. Rountree since his earliest days as an undergraduate student, when he took a class in persuasion from the former head of the department, Dr. H. L. (Bud) Goodall. "He introduced me to rhetorical theorist Kenneth Burke," says Dr. Rountree, "and that set my mind on fire."

As series editor, Dr. Rountree will be assisted by an editorial board comprising 12 of "the best people in rhetoric and law." Together, they will solicit and select manuscripts for publication. "To start with, we have to let people know we exist!" he says. "But we're hoping to publish 2 or 3 books a year."

The books will be scholarly in nature "but won't be so highly technical that they won't be understandable by a general audience," says Dr. Rountree. Instead, they will focus on the intersection of law and society, like NSA spying or the Casey Anthony trial, and "what impact those issues have on the public, on who we are and who we want to be as a society."

The series will also examine law through a rhetorical lens by looking at the construction of law in popular media as it shapes expectations about the law, its processes, and public memory. "It's one thing to say what the law is as written, but what do people think their legal rights are?" he says. "Law is a field that involves persuasion at lots of levels."

A perfect example of this, he continues, is TV shows like "24" and movies like "Zero Dark Thirty," which justify the use of torture despite it being unconstitutional. "Now the public may think 'Is it necessary?' when it comes to torture because they've seen fictional representations that say, 'We have to do this, we need to know'."

Ultimately, Dr. Rountree hopes the series will "create a conversation about the law that's different from conversations we've had before" - and further a field that he finds both fascinating and challenging. "It's the story of people's actual lives," he says, "and it deals with issues of who we are and who we want to be as a society."