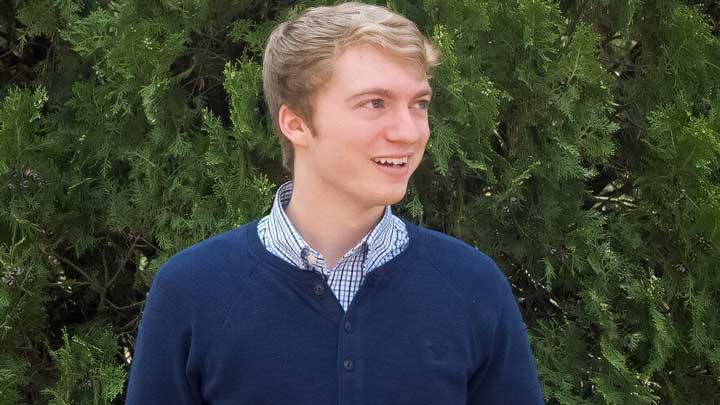 UAH College of Business senior Jared Grogan on the campus of UC Berkeley.

Mass speculation and angst during the years of the Great Recession (2007-2013) shaped the academic future of Jared Grogan. An economics major at The University of Alabama in Huntsville (UAH) College of Business, he arrived at UAH as an undeclared major student. It didn’t take long for Grogan to declare mathematics as a major area of study. "I always enjoyed math, and I've noticed data science has become more prevalent in recent years. My desire is to specialize in the data science I conduct."

Grogan was a junior high school student in 2007-2008, the years of the financial and subprime mortgage crises in the United States and abroad. "I distinctly remember much of the media coverage throughout the recession, I felt that many people were simply speculating on what would happen instead of consulting the experts. However, I had no idea what exactly happened, so I decided my time at UAH could be spent learning more about economic phenomena and how it shapes our world."

The East Tennessee native began his collegiate studies at UAH in 2014. "I initially decided to check out the university due to its highly ranked engineering program, as well as its proximity to potential employers in Cummings Research Park. I ultimately decided to attend UAH when I realized I would have all these benefits in addition to the Charger Excellence Merit Tuition Scholarship."

The summer after his sophomore year, Grogan had the opportunity to work with Dr. Cynthia Gramm (Professor Emerita, Management) and Dr. John "Jack" Schnell (Professor of Economics), in the UAH College of Business (COB), as a research assistant. Now retired, Gramm and Schnell’s research focused on labor management, industrial and labor relations and human resource management. Grogan used Excel and Stata (a statistical analysis software used in academia) to build data sets for studies on hate groups, strategic alliances in competitive environments, and federal employee workplace satisfaction surveys from the Equal Employment Opportunity Commission. "I learned how to use Stata independently, and I absolutely enjoyed the experience overall. After my time as RA in the COB, I pivoted from seeking a career in actuarial science to one in economic academia."

Before she retired, Gramm conducted a nationwide search of universities and Colleges of Business on Grogan’s behalf for similar positions so he could advance his research experience. Grogan was stunned when David Card, renowned Professor of Economics and Labor Economist at The University of California, Berkeley, responded to Gramm’s query letter.

"Professor David Card is well known for his studies on the effects of the 1980 Mariel Boatlift on the Miami labor market, the minimum wage increase in New Jersey in the 1990s, and other work on topics such as immigration, racial discrimination/wage gaps, and the economics of education," said Grogan. "Among Dr. Card’s other accolades, he was awarded the John Bates Clark Medal in 1995, which is awarded by The American Economic Association to ‘an American economist under the age of forty who is judged to have made the most significant contribution to economic thought and knowledge’."

Grogan served as Card’s RA at UC Berkeley in 2017. While there, he helped build and analyze data on school systems in the segregation-era South, with a focus on the disparities in school quality between white and black schools.

"I used Stata to generate graphs and run regressions on certain figures to verify that the data sets were constructed correctly, and I also had an opportunity to proofread two working papers and discuss graduate school with Professor Card," said Grogan. "The experience was quite humbling for me, as I had just learned about Dr. Card in my Labor Economics course here at UAH the previous semester, and within a year, I was meeting with him weekly in his office all the way in California, which is the farthest I've ever been from home."

This summer Grogan’s extraordinary research journey continues, when he begins working at The Industrial Relations Section (IRS) at Princeton University (PU) as a Predoctoral Research Assistant. Established in 1922, the IRS is the oldest academic industrial relations library.

"Essentially, I'll be a full time staff member of the IRS, and I'll work with a few other RAs to build and analyze data sets for several professors associated with the Section. The IRS is a research center for Princeton and visiting faculty to conduct studies on subjects in labor economics such as wage theory, immigration, economics of education, and economic policy/law. The position will allow me to further gain research experience and interact with professors to determine the focus I'd like to take once I enroll in an economics doctoral program," he said. "Among the professors associated with the IRS are some of Professor Card's former coauthors and colleagues. Dr. Card earned his PhD at PU and spent the first years of his career as a professor there before moving to Berkeley, so I'm hoping I'll fit in well when I arrive," Grogan added.

In May, Grogan will graduate from the COB with a bachelor’s degree in Economics and Computational Analysis. As he prepares to embark on his professional journey, Grogan fondly reflects on the many academic opportunities afforded him at the university.

"I strongly believe that the economics professors and lecturers here at UAH prepared me for my academic aspirations. Dr. Brinda Mahalingam (Lecturer, Department of Economics and Computational Analysis), taught the introductory course that convinced me to take on economics as a major. She also helped supervise an economic impact study on Cummings Research Park and Mallard-Fox Creek that I conducted with a fellow economics student. The study was published in Perpetua, UAH's undergraduate journal," he said. "In addition, Dr. Mahalingam has been an invaluable mentor as I decided where to apply for RA positions, and she has been a resource for my questions that sometimes extend beyond the curriculum of the courses. Finally, Dr. Allen Wilhite (Professor and Department Chair, Accounting, Finance and Economics), has arranged for several seminars during his ECN 499 this semester, and I am currently working on finishing my Capstone honors project in his course."

Grogan’s predoctoral research appointment at PU will last one year with the possibility to renew for a second year.