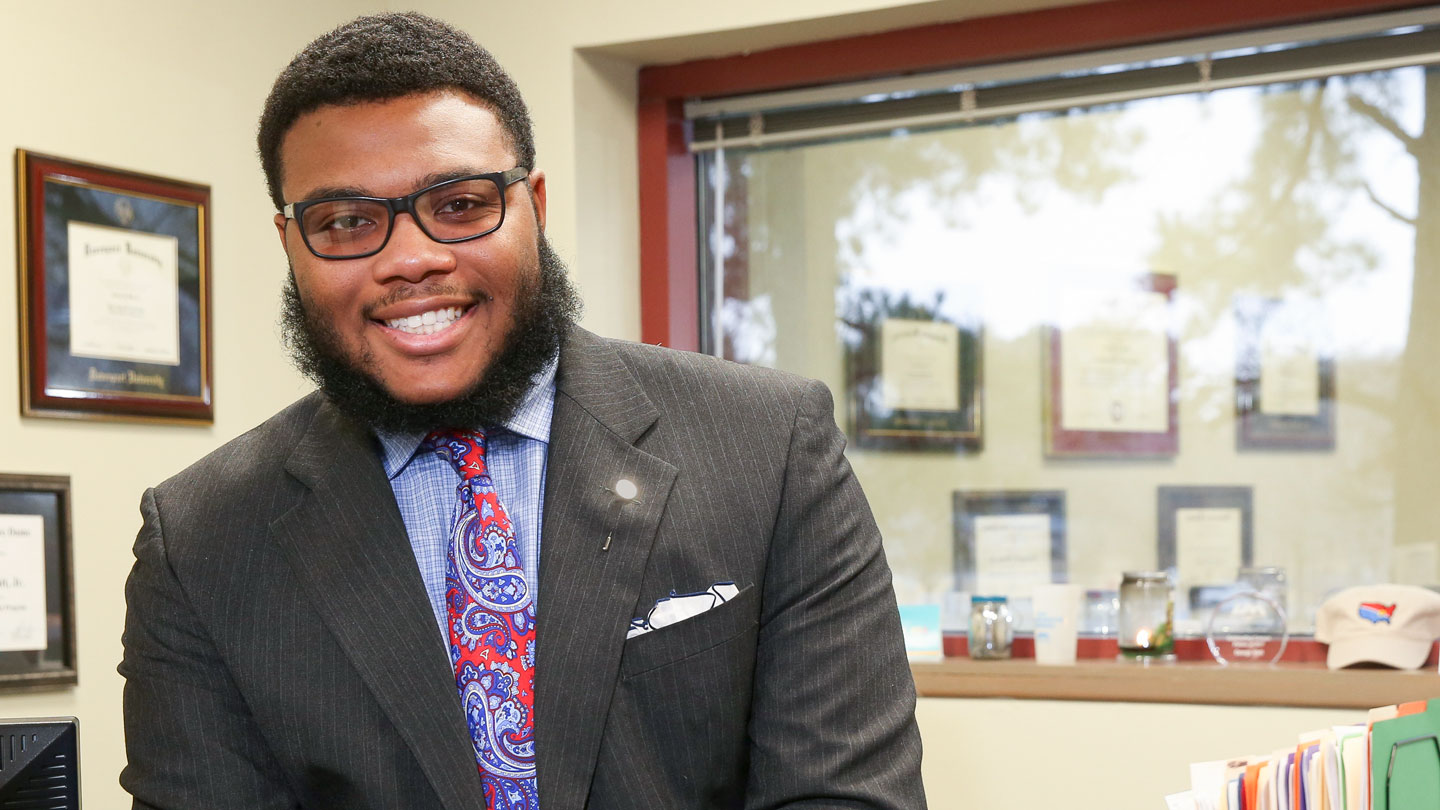 Just like his grandfather, Delandrion Woods is guided by the Bible verse: "Blessed are the meek: for they shall inherit the earth," (Matthew 5:5). Woods, a student at The University of Alabama in Huntsville (UAH) College of Business is the youngest person to serve on the Hillsboro, AL, City Council. "I try not to get caught up in the hype. I just focus on the responsibility and the work associated with serving on the council."

Woods was appointed as council member in charge of Parks and Recreation in 2017. His main duties are to oversee the functions of the department and to make sure all parks are well maintained. "Right now, we have a demolition project at an old school. My goal is to revamp that site and build a community center with programs for the elderly and children in Hillsboro." He will hold the council position until 2020.

A hard worker, Woods is also employed full-time for the City of Decatur as an assistant supervisor in the Parks and Recreation Department. The Hillsboro native graduated from East Lawrence High School in 2011 with an advanced diploma.

He was rewarded for his high academic achievement with two collegiate scholarships. Woods always thought he would go to law school and become an attorney, then hopefully a judge. But during his junior year of high school, the notion of becoming a lawyer shifted. "I have always been business savvy. I honestly can’t remember if there was a deciding factor that pushed me to major in finance. For a short time, I also thought about a career in business law."

Initially, Woods had his mind set on attending The University of Alabama or Auburn University. "As I neared high school graduation, I realized that I couldn’t afford to attend either school, because scholarship funds would not be enough to cover expenses. So, I decided to start at Calhoun Community College (CCC) and figure things out as time passed."

It was during his second year at CCC, when Woods had an opportunity to talk with UAH recruiters visiting the college campus. "I was encouraged to fill out an admissions application… I said to myself, 'If they accept me, I’m gone'. I received an acceptance letter a couple weeks later, and I started at UAH that fall."

Woods has never regretted the decision to transfer to UAH, and strongly believes the university has prepared him for a successful future in finance. "Overall, my classes are great. I enjoy my professors and I must say, UAH has some extraordinary teachers. I have a great interaction with the faculty. I am very interactive in my classes which makes it easy for other students to talk to me outside of class."

Woods' academic course load, work on the Hillsboro City Council and full time job with the city of Decatur, leaves little time for involvement in extra curricular activities at UAH. In the past he has participated in the university's Black Student Alliance and gospel group, Anointed Voices. Woods continues to test the limits of his time management skills by accepting student leadership positions in the College of Business. He now serves as board member for the newly found chapter of the Financial Management Association, and recently became a student ambassador for the COB.

"It is extremely difficult to balance out my work schedule, extracurricular activities (on and off campus), and school schedule," said Woods. "There is always something going on. Whether it’s a deadline for an assignment or project, a meeting to attend, or just plain ole work to do! I don’t think I would have it any other way, because I put the PRO in procrastinate. I work best under pressure…90 percent of the time, it’s in my favor. The other 10 percent of the time, well it costs me dearly."

As for work on the Hillsboro City Council beyond 2020, Woods is leaving that decision up to a higher a power. "If the opportunity presents itself and the Lord says, 'Move' then I’ll do it." Woods will graduate from UAH with an undergraduate degree in finance later this year. He plans to return to the university to complete an MBA.