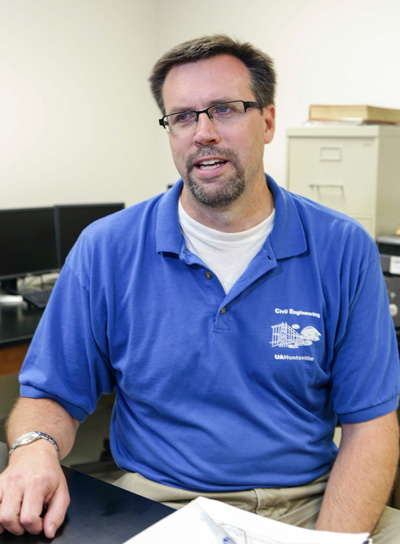 HUNTSVILLE, Ala. (Nov. 12, 2013) - When it comes to expertise in everything from foreign languages to physiology, The University of Alabama in Huntsville (UAH) has the market cornered. So it's no surprise that when Rocket City officials needed help, they called on UAH civil engineering professor Dr. Michael Anderson for assistance.

At issue was a recent traffic study to determine whether the construction of a new 24-hour Wal-Mart on Drake Avenue east of Memorial Parkway would negatively impact traffic flow at the proposed location. The conclusion was that it would not, but residents were not convinced.

"The big concern was that Wal-Mart paid the consultants to do the original study, and that the same consultants have done the previous 30+ Wal-Mart studies in the state of Alabama," says Dr. Anderson. "So the residents were nervous there was some sort of bias; they wanted someone who could speak more freely."

Originally, however, the city planned to hire a company from California to verify the results. "But one of their issues was it would take them so long and cost so much," he says, "whereas I could do it in less than two weeks and just under budget to avoid a full state bid process."

So Dr. Anderson was hired. "It was basically reviewing the inputs and verifying that the parameters used and assumptions made were correct," he says, "like making sure that the traffic counts used to establish baseline were done at peak hour traffic."

He also had to look at the routes that the study indicated most cars would take to and from the new store - though as a Huntsville native he disagreed somewhat with their assumptions. "They put a much higher percentage coming from the south on L&N Drive, and in my view you would use Memorial Parkway," he says.

In fact, putting a high traffic volume on L&N Drive would be a worst-case scenario - which is exactly what the study aimed to do throughout, he says. "They skewed everything they could to make it look like Wal-Mart was going to do the most amount of traffic impact."

As a result, Dr. Anderson had no choice but to agree with the results. "The city's requirement to either allow or not allow the permits hinged on whether or not the Wal-Mart would negatively influence traffic so much so that the city's infrastructure cannot handle it," he says. "And at present it doesn't."

But even as city officials could rest easy knowing that the study's results were valid, there were still concerns on the part of the residents - known collectively as the Members of Midtown Huntsville Association - living in proximity to the proposed site.

"The residents had concerns they wanted addressed that were somewhat separate from what the city wanted addressed, so they came here and met on campus with me," says Dr. Anderson. One example? The high volume of traffic on residential streets that large delivery trucks might bring to the neighborhood, particularly at night.

To alleviate that, he identified potential routes for the delivery trucks that would not inconvenience residents. But, he says, "we can't dictate how Wal-Mart has deliveries made because they're public roads, so it's up to Wal-Mart if they want to implement those or not."

And hopefully, he continues, they will. "I would like to think they would want to be a good neighbor because the residents who live nearby are likely to be their customers," he says. "So it's in their best interests to not upset them."

Of course, whether or not Wal-Mart will end up following his suggestions remains to be seen. But for the time being, construction is a go; following Dr. Anderson's verification of the study, the city issued a building permit to Wal-Mart for the new 150,000-square-foot store, with completion set for the fall of 2014.

As for Dr. Anderson, he just appreciates being seen as a community resource. "It's good because the faculty should be seen as local experts," he says. "And being thought of as an expert who can review other traffic studies is good for the university, in terms of having its faculty stay up to date in their field."

Indeed, he is already planning to use the review as an example of the real-world application of civil engineering skills. "When I'm teaching about traffic impact studies," he says, "I can bring some of the experience of this review and the study that was done into the classroom."

All of which makes the combination of industry and academia over the past few weeks something of a perfect storm for the civil engineer. "There are two things I like: working at a college and transportation," says Dr. Anderson. "So I have the best job I can imagine!"